Angela Davis, Noam Chomsky, Mumia Abu-Jamal, Rabab Abdulhadi, and several Members of European Parliament join hundreds more in calling for the release of Georges Abdallah who has been imprisoned in France for almost 37 years. 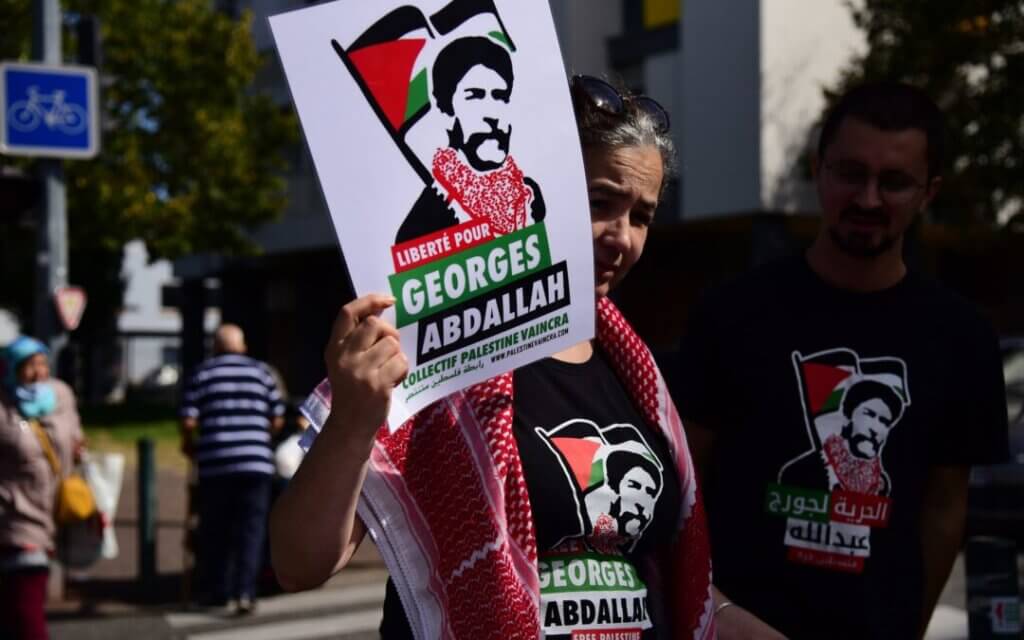 PROTEST IN LANNEMEZAN, FRANCE, OUTSIDE THE JAIL WHERE GEORGES ABDALLAH IS HELD. (PHOTO: COLLECTIF PALESTINE VAINCR)

Georges Ibrahim Abdallah is a Lebanese communist of Maronite Christian origin, imprisoned in France for almost 37 years. Why? How is a Lebanese man arrested in 1984 in Lyon still in French prisons despite the fact that he has been eligible for release for 22 years?

As a teacher in northern Lebanon in the 1970s, Georges Abdallah worked with the Palestinian people and against colonization. He left his region as a young man to join the mobilization against the Israeli occupation, especially during the invasions of 1978 and 1982, while Lebanon was in the midst of war. These repeated Israeli military operations were devastating and murderous for the Palestinian and Lebanese populations. The Israeli army bombings claimed thousands of civilian lives and the brutality reached its peak in the now infamous massacres of the Palestinian refugee camps of Sabra and Shatila in September 1982.

In this context, Georges Abdallah co-founded the Lebanese Revolutionary Armed Fraction (FARL) which claimed responsibility for several operations on French soil, including the executions in 1982 of Yacov Barsimentov and Charles Ray, active Mossad and CIA agents. Arrested in Lyon on October 24, 1984, Georges Abdallah was sentenced to life imprisonment for complicity in the assassinations, following a politically motivated trial riddled with irregularities. As an example, let us note the case of his first lawyer, Jean-Paul Mazurier, who later revealed, after the trial, that he had been in the employ of the French intelligence services. Or even the ludicrous accusations (officially disclaimed some time later) against the Abdallah brothers, naming them as supposedly responsible for the attacks on the rue de Rennes in Paris in 1986. The response to these attacks designated Georges Abdallah as a scapegoat in a period when the authorities and the media of the time sought to name any culprit, with the bloody attacks which make the headlines. While the prosecutor in his case requested a 10-year prison sentence, Georges Abdallah was sentenced to life imprisonment: Exceptional justice running at full speed.

According to French law, he has been eligible for parole since 1999. However, Georges Abdallah has made eight requests for release, without success. In 2013, the sentencing court granted his release but made it conditional on deportation to Lebanon. Manuel Valls, then Minister of the Interior, refused to sign the deportation order. The reason given? Georges Abdallah refuses to repent. The French state has continued its relentless pursuit, and Georges Abdallah remained in prison.

In March 2020, Georges Abdallah received for the third time the visit of Mr Rami Adwan, Ambassador of Lebanon to France, this time accompanied by Ms Marie-Claude Najm, Minister of Justice of the resigned Lebanese government. During this meeting, they reaffirmed the support of the Lebanese state for the release of Georges Abdallah. The mobilization for his liberation has been developing in France for more than 15 years alongside that in Lebanon, where his family and many supporters await him. In Palestine, he is considered as one of the 4,650 Palestinian prisoners, and support for his case is growing in dozens of countries around the world.

On October 24, 2021, Georges Abdallah will have spent 37 years in French prisons. He has become the longest-held political prisoner in Europe. The day before, October 23, hundreds will march to make our voices heard and demand his release in front of Lannemezan prison where he is locked up.

Today, calling for his release is a simple demand for justice!

A French translation of this statement appeared in Mediapart on October 22, 2021.