Today is Palestinian political prisoner Samer Al-Issawi’s 160th day on hunger strike, and fellow prisoner Ayman Sharawna having been on hunger strike nearly 6 months before suspending his strike for a week is once again fasting for his freedom. Both prisoners are being held by Israel without charge or trial. According to the internationally brokered deal to release captured Israeli corporal Gilad Shalit both Sharawna and Issawi should be free men today but Israel reneged on its agreement and rearrested both men after Shalit had been released.
The BBC describes its mission as one to “inform” and “educate” and the news in particular is described as “providing trusted World and UK news..” so you would think they would cover this story and follow it with updates as it developed over the last six months.
The search engine Google has indexed over 21 million articles from the BBC website yet it returns no results from the BBC for Samer Issawi or Ayman Sharawna*. Neither prisoner has ever been mentioned by the BBC – those 21 million articles.. empty of any reference to Palestinian hunger strikers Issawi and Sharawna, both nearing death after nearly six months without food.
If we do a quick search on Google for “Gilad Shalit” it brings back around 1,120 articles from the BBC which includes around 50 articles from 2012! Shalit was released over a year ago in October 2011 and yet he is still news worthy for the BBC. The last article on him by the BBC is from October 18th 2012 – a special on the anniversary of his release!
The Shalit release anniversary article reports of his “ordeal”, the “psychological effects”, “trying to come to terms with his fame” the ordeal of the media following “his first bicycle ride after he returned home.. [his] trip to Paris to visit President Nicholas Sarkozy and a meeting with New York Mayor Michael Bloomberg.. at a concert of the popular singer, Shlomo Artzi, who dedicated a song to him; at various sports events and on the set of the US television drama series, Homeland..” Contrast this ‘ordeal’ which is newsworthy for the BBC to report to the ordeal Palestinian prisoners on hunger strike are going through TODAY.
Just two weeks ago Samer Al-Issawi, a wheelchair bound skeleton of a man barely breathing after 140 days without food, was brutally attacked by Israeli guards in the courthouse in front of an Israeli judge, who didn’t intervene, as guards punched the dying man in the head and chest resulting in broken ribs. They then attack his mother and sister, all this in front of the cameras – captured on video ready for any news channel to broadcast.. but not the BBC – their mission to ‘inform’ and ‘educate’ apparently doesn’t extend to Palestinians. An emaciated dog that has lost half its weight due to being abandoned is afforded an article by the BBC which includes a large colour photo**, but not Samer Al-Issawi who after 160 days without food has lost more than half his body weight, not even one mention of his name.
The BBC is principally funded by television licence fees – 82% in 2011 ( £3.6 billion). Such blatant bias by omission in its reporting is unacceptable and we as TV licence holders demand the BBC follow its remit to inform and educate by covering the issue of Palestinian hunger strikers. We will be protesting outside the BBC Headquarters on Portland Place, W1A 1AA (closest tube is Oxford Circus) on Friday 11th January at 2pm, please join us. 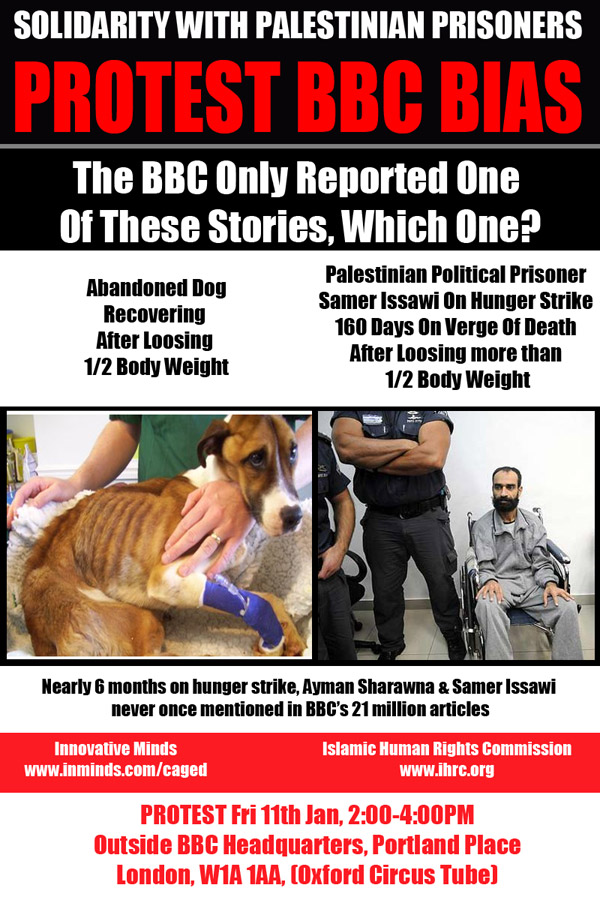 *Whilst searching for “Ayman Sharawna”, “Sharawna”, “Samer Issawi” “Samer Al-Issawi” return no results “Issawi” on its own did return 128 hits but none of them where of the Palestinian hunger striker (they referred to Iraqi and Libyan politicians with the same name).
**Emaciated dog abandoned in lay-by on A370 at Hewish starting recovery, http://www.bbc.co.uk/news/uk-england-somerset-18265917 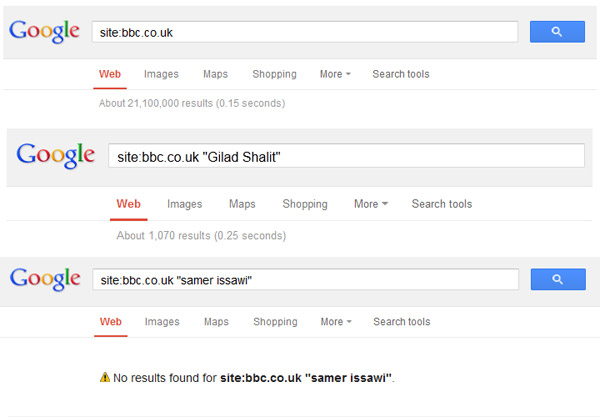