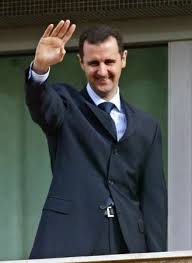 
With his country embroiled in its fourth month of protests and bloodshed – leading to at least 1,200 citizens killed across Syria, and more than 10,000 refugees fleeing the country for Turkey – President Bashar Assad took to the podium in Damascus on Monday for his first national address in two months.

Over an hour later, it was clear, experts say, that little has changed in Assad’s methods, and that international pressure and a growing body count aren’t persuading a man who is fighting for his life.

Andrew J. Tabler of the Washington Institute for Near East Policy said the speech showed that while Assad is clearly worried about the situation in Syria, he is choosing to stick to the same platitudes he has relied on for years.

“He’s trying to give us a bunch of words to placate those who are abroad and to placate the protestors, but there are no real specifics on what he’ll do,” Tabler said.

“Clearly, the length of the speech and what he [Assad] talked about indicate that he’s worried – but at the same time, he’s saying the protests are being driven by criminals and conspirators, or that it isn’t that big a deal or that big in numbers.

So it’s a weird combination, and I think that he is seemingly trying to bury the issue.

It’s very hard for him to admit that he has this problem, which would be admitting internal weakness,” he added.

Tabler, the co-founder and former editor-in-chief of Syria Today, the first private-sector English language magazine in the country, said that Assad’s contention that foreign “conspirators” and “saboteurs” were bringing chaos to Syria “is an old thing for Assad; not just during this crisis, but throughout his presidency.”

Tabler said that Assad will “continue to do the same thing he’s been doing: more security solutions, he’ll form some committees [for reform], and just hope that people go home and that the international community gets off his back.”

He added that “the difference between the protestors’ demands and what the state is offering are so vast that it’s not conducive to settling the plan.”

According to Tabler, the time has passed for reforms, and the anti-government demonstrators have every reason to push on until the end, however long it takes.

“It seems like the protestors are doing a pretty good job so far,” he said. “They know that if they leave the squares they’ll lose their leverage on Assad and then they’ll only be able to go home and wait for the security forces to knock on their doors.

So they have a pretty strong reason to stay out.”

For Yoni Ben-Menahem, Israel Radio director and chief editor, Assad’s speech showed that the situation for his regime could not be clearer.

“He’s trying to contain the situation, but it’s helpless,” Ben-Menahem said. “No one [in Syria] believes him anymore.

He’s slaughtering his people, more than 10,000 refugees – and the massacres are continuing.”

When asked what Assad’s remaining options are – assuming that promises of reforms won’t placate demonstrators – he said: “his option is to fight to the end. He cannot leave – if he steps down the Alawites will be slaughtered. Like [Libyan leader Muammar] Gaddafi, he will continue to the end.”

“It was bizarre. After three months that the country is burning, this is what he has to say. He won’t let the facts fool him; he’ll keep saying the same things.”

Zisser said that Assad’s nonspecific promises of reform miss the point, which is that the problem for the demonstrators on the street is the regime itself, not particular laws or regulations.

“The problem isn’t a stipulation in the Syrian laws; the problem is the regime itself. His only option is to continue with the path he’s on,” said Zisser.

He added that the speech showed that efforts by Turkey to force his hand have not reaped any rewards.

“I don’t see that the Turks have had any sort of influence.

He made it clear that he thinks that he must continue as he is. He doesn’t understand what has changed. He’s a dictator, this is how a dictator sees things.”