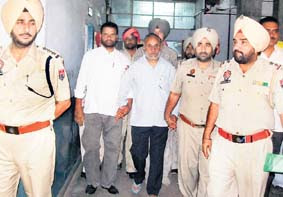 COM. HARBHINDER JALAL, BEING PRODUCED BY POLICE IN KHARAR COURT

Harbhinder Singh Jalal, who has been editing a revolutionary Punjabi magazine “CHAMKDA LAL TARA” (Shining Red Star), was arrested by Kharar Police while he was traveling in a bus near Gharuan village. The police alleged him to be the head of Punjab unit of CPI Maoist. A 32 bore pistol and some live cartridges were shown to have been recovered from him.

In police custody Harbhinder was severely tortured and subjected to third degree methods of interrogation. A case under S.10,13,18 & 20 of Unlawful Activities (Prevention) Act; S. 25, 54, 59 of the Arms Act and Section 121, 419, 420, 471 of the IPC has been slapped against him. He was denied the legal assistance of his chosen lawyers. Lok Morcha Punjab, along with his family approached S/Sh. R.S. Bains and Harinder Pal Singh Ishar, Chandigarh based Human Rights lawyers, who moved an application for permission to meet Com Harbhinder in police custody and for his medical examination. The State vigorously opposed this application on the fictitious ground of threat to national security. However the court allowed the advocates to meet him daily in the Police Station between 7 PM to 8 PM and also to get him medically examined every 48 hours from the Civil Hospital.

On 9.5.2011, when Com Harbhinder was produced in court for further remand, dozens of his friends and well-wishers from all over Punjab, came to see him, but the police did not allow them to meet him. His further police remand was sought on the plea that he was to be taken to Ranchi to affect certain recoveries. Subsequently this pretext proved to be false as he was not taken to Ranchi. Perhaps the court’s order permitting his lawyers to meet him everyday in the extended period of remand, acted as a dampener for the police. On 14.5.2011, he was remanded to judicial custody and is now lodged in Ropar Jail.

On 6.5.2011, a heavy contingent of Ropar and Bathinda Police raided his house at Rampura. Finding it locked, the police tried to find its keys from the neighbors, abusing, threatening and misbehaving with them. The people however refused to be cowed down and did not allow the police to search his house in the absence of any of his family members. To terrorize the people, the police raided the houses of two trade unionists living in the locality. Next day, the police party again came early in the morning along with some Municipal Councilors of Rampura City and forcibly entered in and searched Harbhinder’s house in the absence of his family members and any person from the locality. The police took away a computer, a large number of books and some domestic articles. This move was strongly opposed by the democratic mass organizations of the area. Next day a strongly worded statement denouncing the terror tactics of the police was issued jointly by the Bharti Kisan Union ( Dakonda), Technical Services Union, Democratic Teachers Front, and B.K.U. (Ugrahan).

Lok Morcha Punjab, Democratic Front Against Operation Green Hunt Punjab, and a revolutionary paper SURAKH REKHA condemned the arrest and false implication of Harbhinder Jalal in a criminal case. To keep the people informed about this, we utilized the medium of Facebook by posting news items and press statements on it. Now the DFAOGH Punjab has decided to hold Conventions at Chandigarh and Rampura on this issue along with the repressive measures taken at village Selbrah and Kotra Kaurian Wala, against the people opposing opening of liquor vends.

The planting of 32 bore revolver and live cartridges on Harbhinder Jalal, seems to be a part of the Punjab Police’s crude attempt to discredit revolutionary democratic movement in Punjab. Recently the police unearthed a gang of serving police employees and Arms Dealers, supplying country made illicit arms as genuine, by putting fake stamps and markings of reputed arms companies on them. As many as 8 police employees serving in various districts of Punjab have been arrested. The DGP Punjab, with the aid of certain pliable press persons, has been trying to link it with the Maoists, although up till now, no such proof is forthcoming.

Lok Morcha Punjab views the arrest of Com Harbhinder; falsely charging him with unlawful activities, waging war against the Govt, forgery and cheating; subjecting him to third degree torture, and illegal raids at his house and the houses of other trade unionists at Rampura, as atrocious, totally illegal and undemocratic steps, deserving strongest condemnation. These steps are aimed at stifling the political dissent, and ruthlessly crushing of every attempt to organize the people against the policies of liberalization, globalization and privatization, being pursued by the anti-people and anti-national rulers to ensure super profits for the MNCs and their Indian agents, through unhindered exploitation of our rich natural resources. We call upon all democratic people to join us in demanding withdrawal of the criminal case registered against Com Harbhinder Jalal and his unconditional release; putting an end to all repressive measures initiated against revolutionary political and mass activists and the people; and complete halt to neo-liberal economic policies.