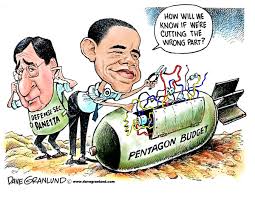 Defense spending will most likely be a major topic at NATO’s upcoming summit in Warsaw. The United States has already indicated that it will renew its efforts to convince the bloc’s European allies to boost their contributions to the budget, but these calls might largely fall “upon deaf ears,” as defense analyst Dave Majumdar described it.

True, only five countries, the US, Greece, Poland, the UK and Estonia, met the 2-percent threshold last year. France, Turkey, Germany and Canada spent between 1 and 1.8 percent of their GDP on defense, with Italy spending 0.95 percent.

This is not the whole story. In absolute terms, the US spent more than 665 billion in 2015, more than all the other NATO members combined. The next largest contribution came from Great Britain, whose defense budget amounted to nearly 60 billion last year. For comparison: France spent nearly 44 billion, while Germany – 39.7 billion.

Needless to say, Washington has not been happy with its allies for not sharing the burden.In June 2011, Robert Gates, who served as the US defense chief at the time, famously called NATO a “two-tiered alliance” that comprises those, who provide funds and conduct combat missions, and those, who enjoy the benefits, but do not contribute. For Gates, this situation was unacceptable.

Although it might look like nothing has changed since then, NATO’s 2014 summit in Wales became a watershed moment for the bloc when leaders and not only defense ministers said they were committed to the 2-percent goal.

“Many European states – as of last year – have stopped cutting their defense outlays and have started to slowly boost their spending,” Majumdar noted, citing an unnamed senior NATO diplomat. “After more than two decades of defense cutbacks, NATO’s defense budgets stopped shrinking last year and have started to increase with 1.5 percent growth per annum.”

It follows then that the bloc’s officials have finally found a tactic that works, namely over-hyping the non-existent threat emanating from Russia. For its part, Moscow has expressed concerns with NATO’s increasingly aggressive behavior that is detrimental to European security and stability.