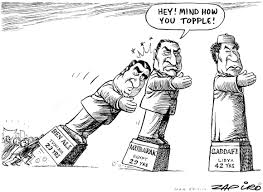 World View: The anti-regime demonstrations that worked so rapidly and unexpectedly in Tunisia and Egypt are faltering elsewhere as rulers fight to hold on to power

The Arab awakening is turning into the Arab nightmare. Instead of ushering in democracy, the uprisings in at least three Arab states are fast becoming vicious civil wars. In the past 10 days, crucial developments in Syria, Libya and Yemen have set these countries spiralling into violent and intractable struggles for power.

In Syria, thousands of troops are assaulting the northern town of Jisr al-Shughour where the government claims 120 of its soldiers and police were killed last week. Leaving aside exactly how they died, the government in Damascus is making it lethally clear that in future its opponents, peaceful opponents or not, will be treated as if they were armed gunmen. An extraordinary aspect of the Syrian uprisings is that people go on demonstrating in their tens of thousands despite so many being shot down. But some are evidently coming to believe that their only alternative is to fight back.

A week ago in Yemen, the demonstrators, who have been marching and rallying in the streets of Sanaa since the start of the year, celebrated jubilantly on hearing the news that President Ali Abdullah Saleh had left the country for hospital in Saudi Arabia after being injured in a bomb attack. “The people, at last, have defeated the regime,” the protesters chanted. But it is ludicrous to portray this as a triumph for peaceful protest, since the reason Saleh went to Riyadh was injuries inflicted by a bomb planted in the presidential compound. It is becoming depressingly clear that the Saleh regime is not as dependent on the presence of the president himself as many imagined. Other members of the Saleh clan are in command of well-armed and well-trained military units that remain in control of most of Yemen.

Even before what was clearly a well-planned assassination attempt against Saleh, the street protesters were looking marginalised. They were able to stay in “Change Square” only because traditional players, including powerful tribal and military leaders, had switched sides and were defending them.

Is Yemen on the way to permanent confrontation of the type that reduced Somalia to ruinous anarchy? In the past, Yemenis often argued that, while Yemeni politics was very divisive and violent, the ruling elite had a remarkable capacity to reach last-minute compromises. Maybe this was true, but the failure to evict the Saleh clan, even when its leader is out of the country, bodes ill and opens the way for a collapse of state authority.

Libya has also moved a long way from the democratic hopes of February. An important signal since the start of June has been the intervention of Nato attack helicopters, making the rebels more an auxiliary force in a foreign-run campaign. The deployment of the rebels is now largely decided by Nato, without whose air power the local anti-Gaddafi forces would long ago have been defeated. Most Libyans probably want Gaddafi to go, but the Transitional National Council in Benghazi may not have the legitimacy or the support to replace him. He is very likely to be displaced before the end of the year, but this will be a victory primarily won by Nato and not popular revolution.

A fourth country where the Arab awakening seemed to be on the verge of success is Bahrain. But since the Saudi-led intervention, and the assault on pro-democracy protesters and the Shia population as a whole since 15 March, this tiny kingdom has been convulsed by a civil war that rages just beneath the surface. The decision by Bahraini al-Khalifa royals to play the sectarian card and pretend the demand for democratic reform was a revolutionary plot orchestrated by Iran has won many believers among the Sunni. Quite why the family should have decided to declare war on most of the Arab population of Bahrain remains something of a mystery since this will make it permanently reliant on Saudi Arabia. Probably a sense of panic, at its height in March and induced by the fall of the regimes in Tunisia and Egypt, explains the intensity of the repression in Bahrain. A price for this will be permanently to deepen the bitter hostility between Shia and Sunni.

Probably one should not be so surprised by the faltering of the mass movements associated with the Arab Spring. The surprise is rather that they should have succeeded so easily in Tunisia and Egypt. After all, so-called “velvet revolutions” do not have a high success rate. They may have worked in Eastern Europe when communism was displaced 20 years ago, but the communist leadership was not prepared to fight it out, was divided, massively unpopular and hoped to be part of the new order. A better parallel to the Arab Spring is the Green movement’s attempt to stage a velvet revolution in Iran in 2009, which signally failed. Even if the election of that year was fixed by the Iranian government, it still had a core of committed supporters in the Revolutionary Guards. The urban poor never joined the protests en masse as they did in Tunisia and Egypt.

The lesson of the past six months in the Arab world is that unless the street protesters can split or guarantee the neutrality of the armed forces, their chance of success is limited. Their only option is to get full-scale foreign military intervention, as has happened in Libya. In practice, this means obtaining support from the US, even if the military action is carried out by the UK and France. It was the fear in Saudi Arabia and the Gulf monarchies this year that they no longer had a guarantee of support from Washington that panicked them into their violent onslaught on protesters in Bahrain.

The foreign media – notably al-Jazeera and satellite channels – played a central part in opening the way for the Arab Spring. Censorship, control of information and communications played an important role in the establishment of the police states that monopolised power in the Arab world from the 1970s. But this control has been weakened by the internet, satellite television and mobile phone.

At the same time, not all the instruments of power have changed. Security forces remained. The spontaneous nature of the Arab uprising was at first an advantage because the police did not know who to arrest, but this lack of leadership became a disadvantage when the revolution faced opposition. The moderation of the early protesters is turning out to be a crippling weakness as rulers fight for power.