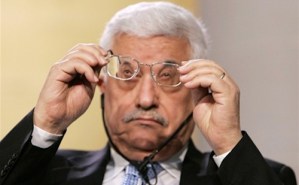 Two years after becoming a non-member state of the United Nations, the PA is circulating a UN Security Council draft resolution to set a timeframe for full Israeli withdrawal and the establishment of an independent Palestine. On the other hand, France appeared to posit a European-led alternative resolution emphasising a restart of negotiations, rather than specifying an end to the occupation.

Last week, following the murder of one of its ministers, the PA threatened to stop security coordination with Israel. This week in Algeria, President Abbas reiterated the same threat if the UN failed to put an end to the Israeli occupation.

A little over a year ago, US Secretary of State John Kerry succeeded in cajoling the PA to go back to the negotiation table, promising to make every effort “…to reach a final status agreement, not an interim agreement” in nine months.

The PA agreed with the understanding that Israel would unofficially limit the building of new Jews-only colonies and release, in batches, 104 Palestinian prisoners held from before the Oslo accord.

In turn, the PA agreed to hold off from joining new UN organisations during the negotiations.

The inept – or colluding – US mediators in effect told the Palestinians that East Jerusalem wasn’t specifically mentioned in the agreement. It would be worth noting that the American team was led by Martin Indyk, a known Zionist who for many years was on the payroll of the American Israel Public Affairs Committee (AIPAC) and other Israeli think tanks in Washington.

The PA kept quiet, talks continued and, after each release of a group of Palestinian prisoners, Israel issued a batch of permits for illegal Jews-only homes in the occupied West Bank. Self-professed Palestinian chief negotiator Saeb Erekat angrily told his impassive Israeli counterpart: “We agreed on prisoners for no UN, not prisoners for settlements.’”

Yet, the exercise continued and, with every release of prisoners, held as hostages now to keep the sham negotiations going, Israel illegally gobbled up more Palestinian land.

At the end, Israel reneged on releasing the last batch of prisoners and, instead of forcing Israel to keep its commitment, the US sought to convince the PA to extend the negotiations.

… through its inaction, the Palestinian leadership risks history’s final verdict of being an accessory to the surrender of all of Palestine.

Needless to say, nine months later Israel built more than 15,000 Jews-only homes on occupied Palestinian land, the US did not deliver what it promised and the PA failed to act on its threat of joining UN organisations. To placate internal opposition, Abbas theatrically signed applications to join 15 irrelevant UN organisations such as the anti-corruption protocol. The highly-talked-about International Criminal Court (ICC) was conspicuously absent from the list.

But if the Americans are genuinely interested in a moderate coalition, then they should not reward the current right-wing government by blocking the UN vote to end the Israeli occupation.

If not, the PA should stop dilly-dallying and sidestep the US-throttled UN Security Council by signing the Rome Statute to become a fully-fledged ICC member. Otherwise, through its inaction, the Palestinian leadership risks history’s final verdict of being an accessory to the surrender of all of Palestine.