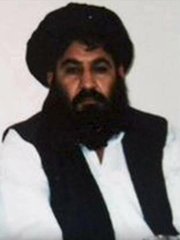 Pakistan has denounced the US drone strike believed to have killed the Afghan Taliban chief Mullah Akhtar Mansour.

“It may be recalled that the fifth meeting of the Quadrilateral Coordination Group (QCG) held on 18th May had reiterated that a politically negotiated settlement was the only viable option for lasting peace in Afghanistan and called upon the Taliban to give up violence and join peace talks,” the statement said.

Afghanistan’s spy agency known as National Security Directorate (NDS), senior officials in Kabul and some militant sources on Sunday confirmed that the Taliban leader was killed after the US drones targeted his vehicle in a remote area of in a remote area of south-west Pakistan, near the Afghan border, on Saturday.

On Saturday, the US Department of Defense announced in a statement that it had mounted the strike against Mansour “in a remote area of the Afghanistan-Pakistan border region.”
File photo shows a picture of the leader of Taliban militant group, Mullah Akhtar Mohammad Mansour.

The Pentagon announced on Saturday that the operation had been authorized by President Barack Obama.

The development comes as relations between Afghanistan and Pakistan have been tense in recent years over the ongoing militancy.

Senior Afghan officials blame elements inside the Pakistani spy agency, Inter-Services Intelligence (ISI), for supporting the Taliban militants and sheltering its leadership, while Islamabad blames the Afghan government for giving shelter to the militants on its side of the border.

Moreover, senior officials in Kabul have been frustrated by what they see as Islamabad’s refusal to honor a pledge to force Taliban leaders based in Pakistan to join negotiations.

They have long blamed Pakistan for turning a blind eye to the Taliban militant group whose leadership is widely believed to be based in the Pakistani cities of Quetta and Peshawar, near the border.

The Taliban has seen a string of defections ever since the news about the death of its founder and long-time leader, Mullah Mohammad Omar, broke in late July 2015.

Mullah Omar died at a hospital in Pakistan’s southern port city of Karachi in April 2013.

Pakistan, which wields influence on the insurgent group, mediated the first round of direct peace talks between delegates from the Afghan government and the Taliban last summer, but a planned second meeting was canceled after news broke that Taliban’s founder and long-time leader Mullah Omar had died two years ago. In recent months, a four-member group comprising Afghanistan, the United States, China and Pakistan has been attempting to revive the talks.

There have also been growing differences among Taliban elements over the negotiations, with some vowing to fight for power instead of taking part in the talks.