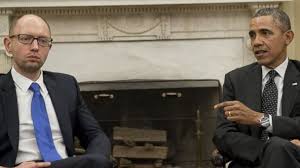 “While Russia has been making efforts to de-escalate and resolve the crisis, the Kiev regime has chosen to launch airstrikes on peaceful residential areas, literally destroying the last hope for preserving the Geneva accords.” Dmitry Peskov, Putin’s spokesman
“The crisis in Ukraine is not the result of ‘Russian aggression,’ but of a criminal strategy by the US and its European allies to install a hostile regime on Russia’s borders in Ukraine and, ultimately, dismember Russia itself.” Johannes Stern, NATO boosts military build-up against Russia as protests spread in east Ukraine, World Socialist Web Site

Fighting broke out on Friday in the eastern Ukrainian city of Slavyansk when Kiev’s coup government deployed military helicopters to fire on the city while troops and armored vehicles stormed checkpoints. At the time this article went to press, two helicopters had been shot down killing at least two pilots while one was captured. In an impassioned statement on Russian TV, Kremlin spokesman, Dmitry Peskov, appealed to allies in the EU to do whatever they could to persuade Ukrainian authorities to call off the operation and stop the violence.

“We are calling on the European capitals, the United States of America to give an assessment of the current events and are of course calling on those carrying out airstrikes on residential areas to…immediately end the punitive operation and any violence against its own people…”

So far, there has been no response from Washington although it’s clear that the Obama administration had a hand in organizing the crackdown. Not only were the State Department and CIA directly involved in the putsch that removed democratically-elected president Viktor Yanukovych from office, but Washington has also been implicated in punitive operations directed against ethnic Russian protestors in east Ukraine. Both CIA Director John Brennan and Vice President Joe Biden visited Kiev just hours before two previous crackdowns were ordered by imposter-Prime Minister Arseniy Yatsenyuk. As Foreign Minister Sergei Lavrov blandly noted, It’s clear that Washington is “calling the shots”.
On Thursday, it looked like violence might be avoided when coup-President Oleksandr Turchynov said that he had lost control of the situation. In an exasperated message to the media, Turchnov said, “It is hard to accept but it’s the truth, but the majority of law enforcers in the east are incapable of performing their duties.”
Turchynov was referring to the fact that Ukrainian troops have refused to attack their own countrymen. The mutiny has reportedly spread from elite airborne units to local police who sympathize with the protestors. The only group that’s willing to carry out Washington’s proxy war is the Right Sector neo-Nazis who helped topple the Yanukovych government. Just last week, members of this openly fascist party, commemorated “the perpetrators of the massacre of Yanova Dolina,” where “600 Poles were murdered by the Ukrainian Insurgent Army (UPA) in what is now Bazaltovoye. The massacre marked the beginning of ethnic cleansing in what is now western Ukraine, where tens of thousands of Poles were killed within a few months.” (World Socialist Web Site)
These are Obama’s new allies in America’s war against Russia. Now check this out from Reuters:

“The International Monetary Fund warned that if Ukraine lost territory in the east it would have to redesign a $17 billion bailout of the country, probably requiring additional financing.” (Ukraine attacks rebel city, helicopter shot down, Reuters)

Tell me, dear reader, when was the last time you heard of the IMF threatening to withhold funds if a political leader didn’t wage war on his own people? Anyone with half a brain can see that the IMF is just acting on orders from the White House. This is Obama’s war. His fingerprints are all over the policy. Obama is determined to draw Russia into a bloody guerilla war that leaves Ukraine in the same condition as Iraq, Afghanistan, Libya, and now Syria.
Here’s a clip from the New York Times:

“Through stealth and misdirection, and in defiance of Western sanctions, Russia has managed to achieve its immediate goal of what Western and Ukrainian officials believe is rendering Ukraine so chaotic that it cannot guarantee order, mend its teetering economy or elect new leaders to replace Mr. Turchynov.” (Not Getting Through to Mr. Putin, New York Times)

Putin wants a “chaotic” failed state on Russia’s border? Have you ever read such nonsense in your life?
Putin didn’t topple the Ukrainian government. The US State Department did. (Victoria Nuland’s hacked phone calls prove it.) And Putin didn’t violate the Geneva agreement less than 24 hours after the deal was signed by launching a crackdown on civilian protestors in the east. That was US-puppet Yatsenyuk. Nor did Putin deploy the military to surround cities, cut off their water supplies and deploy helicopter gunships to fire missiles at civilian infrastructure and terrorize the local population. That was the work of Obama’s fascist junta in Kiev. Putin had nothing to do with any of the trouble in Ukraine. It’s all part of the US “pivot to Asia” strategy to encircle and (eventually) dismember Russia in order to seize vital resources and control the flow of energy to China. Washington wants to reduce Ukraine to Mad Max-type pandemonium to justify establishing NATO bases on Russia’s perimeter. It’s all part of the plan to control Central Asia and rule the world.
Putin has acted as peacemaker throughout the crisis, but Obama is determined to provoke the Russian president by attacking and killing ethnic Russians. Consider the statement by Russia’s Foreign Ministry following the helicopter incident on Friday morning:

“As we have warned many times before, the use of the army against its own people is a crime and is leading Ukraine to catastrophe…By supporting the organizers of the Kiev coup in their strategy of violently putting down protests, the US and EU are taking on a huge responsibility, essentially closing the door to a peaceful solution to the crisis.” (Putin says Geneva agreement no longer viable after Ukrainian military action, Guardian)

It’s clear now that Obama merely used the Geneva agreement to buy time to move troops and military hardware to Poland and the Balkans. It’s also clear that Obama invited German Chancellor Angela Merkel to Washington so that it would appear that Europe is united behind the US in its proxy war on Russia. But what does Obama hope to achieve by stirring up this hornet’s nest? He knows that Putin cannot afford to back down on Crimea, so what’s the point? And, more importantly, what is Ukraine going to look like when Washington is finished using it as a staging-ground for its geopolitical landgrab? Here’s an insightful piece by Russian academic, Andrei Fursov, who thinks he knows what Obama wants and explains the impact the policy is going to have on Ukraine for years to come.

“The Americans need controlled chaos and civil war…Moreover, it is clear that this country (post-coup Ukraine) is intended to be absolutely anti-Russian, nationalist, Banderite and neo-Nazi. So the dual goal of establishing this anti-Russian state is to constantly apply pressure on the Russian Federation…
As Bismarck (said) ‘We must cultivate among the Ukrainians, a people whose consciousness is altered to such an extent, that they begin to hate everything Russian.’ …
Thus we are talking about a historical psy-op, an information-psychological sabotage, whose purpose is to establish Russophobic Slavs… They are the means to separate Ukraine from Russia and to oppose Russia as a kind … totalitarian empire. This was all devised under the Galician Project, on which the intelligence services of Austro-Germany and Kaiser German worked, followed by the intelligence service of the Third Reich, later – CIA and BND…
Banderastan, if that’s what Ukraine is fated to become, as designed by the puppet-masters across the ocean, is to be an oligarchic, terroristic, Russophobic state…An oligarchic Banderite…oligarchy is the ideal vehicle for external control. Clearly, this will suit both the oligarchs and the West.” (Battleground Ukraine: A Comprehensive Summary, Zero Hedge)

So, there it is: Divide and rule. We saw the Bush administration pull it off with the Shia and Sunnis in Iraq, and now Obama wants to do the same with the Ukrainians and Russians. Same strategy, different continent.
This is Obama’s plan for the “New Ukraine” a fascist-ruled failed state that follows Washington’s directives and puts pressure on Russia thorough endless provocations, belligerence, and war. Ukraine will be Washington’s pit bull in the East, separating Moscow from crucial sources of revenue and thwarting efforts at greater EU-Russia economic integration. This is how Washington hopes to insert itself into Eurasia, to improve its prospects in the Great Game, and to establish global hegemony into the next century.
(Note: “Banderite” refers to Stepan Bandera, who was a Ukrainian nationalist leader who collaborated with the Nazis. Bandera headed the Organization of Ukrainian Nationalists (OUN) According to the World Socialist Web Site: “The Ukrainian Insurgent Army (UPA) carried out numerous massacres of the Polish population in western Ukraine…The UPA served as a military executive organ of the OUN. It was founded in the spring of 1943 and recruited primarily from Nazi collaborators who were previously active in the SS.”)