Home » Post Page » No need for UN resolution on I$raHell 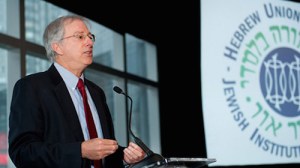 And, by the way, opening the International Criminal Court’s door will torpedo any chance of diplomacy and invite US financial countermeasures

Abbas, after failing to obtain a UN Security Council resolution requiring Israel to end its decades-long occupation of the West Bank, East Jerusalem and Gaza, had announced his intention to join Palestine to the International Criminal Court and seek justice via that route.

“Why not wait?” asks Ross. “If a new Israeli government after the elections is prepared to take a peace initiative and build settlements only on land that is likely to be part of Israel and not part of Palestine, there will be no need for a United Nations resolution.”

If not, and the Europeans decide to pursue a resolution, it must be balanced. He says:

It cannot simply address Palestinian needs by offering borders based on the 1967 lines with mutually agreed swaps and a capital in Arab East Jerusalem without offering something equally specific to Israel – namely, security arrangements that leave Israel able to defend itself by itself, phased withdrawal tied to the Palestinian Authority’s performance on security and governance, and a resolution of the Palestinian refugee issue that allows Israel to retain its Jewish character.

Why should the Israelis be offered anything? The aim is to make them give back what they have stolen at gunpoint. The Palestinians have been waiting 37 years while, week by week, Israel confiscates more of their land and water and plots to steal their offshore gas too. Why drag out the torment unless you’re the worst kind of sadist? Why wait a moment longer for restitution?

Why should the Israelis be offered anything? The aim is to make them give back what they have stolen at gunpoint.

This is not a sudden demand. Back in November 1967 Resolution 242 was passed unanimously by the UN Security Council requiring “withdrawal of Israel armed forces from territories occupied in the recent conflict [i.e. the Six-Day War]” in fulfilment of UN Charter principles. That’s 37 years for the Israelis to get used to it.

The preamble referred to the “inadmissibility of the acquisition of territory by war and the need to work for a just and lasting peace in the Middle East in which every state in the area can live in security”. So would Palestine be able to “defend itself, by itself” and retain its Arab character? We hear ad nauseam about Israel’s security, never Palestine’s.

Israel’s interpretation of the resolution seems to be that it needn’t withdraw until there’s a fully negotiated peace – as if peace was ever in their game plan. But others such as the Russian delegate to the UN, Vasily Kuznetsov, weren’t fooled. Kuznetsov explained the position for us thus:

In the resolution adopted by the Security Council, the ‘withdrawal of Israel armed forces from territories occupied in the recent conflict’ becomes the first necessary principle for the establishment of a just and lasting peace in the Near East. We understand the decision taken to mean the withdrawal of Israel forces from all, and we repeat, all territories belonging to Arab states and seized by Israel following its attack on those states on 5 June 1967. This is borne out by the preamble to the United Kingdom draft resolution [S/8247] which stresses the ‘inadmissibility of the acquisition of territory by war’. It follows that the provision contained in that draft relating to the right of all states in the Near East ‘to live in peace within secure and recognised boundaries’ cannot serve as a pretext for the maintenance of Israel forces on any part of the Arab territories seized by them as a result of war.

Dennis Ross may have difficulty understanding the language of Resolution 242, but to your average native English speaker, like the man on the Clapham omnibus, it’s crystal clear. “Withdrawal from territories occupied in the recent conflict” plainly means “get the hell out of there”.

US Secretary of State Dean Rusk, writing in 1990, remarked:

We wanted [it] to be left a little vague and subject to future negotiation because we thought the Israeli border along the West Bank could be “rationalised”; certain anomalies could easily be straightened out with some exchanges of territory, making a more sensible border for all parties… But we never contemplated any significant grant of territory to Israel as a result of the June 1967 war.

Palestinians blamed for saying “no” to humiliating peace offers

Dennis Ross co-founded the AIPAC-sponsored Washington Institute for Near East Policy and has been described as more pro-Israel than the Israelis. He served the Bush, Clinton and Obama administrations as a top advisor and special envoy on Middle East affairs but is so cosy with the regime in Tel Aviv that few see him as the honest broker he is held out to be. The State Department seems stuffed to the gunwales with people like him and the consequences are worrying.

In his New York Times article Ross blames the Palestinian leadership for not accepting “three serious negotiations that culminated in offers to resolve the Israeli-Palestinian conflict: Bill Clinton’s parameters in 2000, former Israeli Prime Minister Ehud Olmert’s offer in 2008 and Secretary of State John Kerry’s efforts last year”. In each case, he says, a proposal on all the core issues was made to Palestinian leaders and the answer was either “no” or no response.

Ross’s accusation reminds me of the The Israel Project’s training manual, which is designed to help the worldwide Zionist movement win the propaganda war. It teaches how to justify the endless occupation, the slaughter, the ethnic cleansing, the land-grabbing, the cruelty and the blatant disregard for international law and UN resolutions, how to demonise Hamas and Iran in particular, and how to make Israel smell sweeter with a few squirts of the aerosol of persuasive language. This advice at the beginning sets the tone: “Remember, it’s not what you say that counts. It’s what people hear.”

The manual recommends numerous messages that are aimed at the mass of “persuadables”, primarily in America but also in the UK. Here is one that’s not unlike the nonsense Ross is trying to put across:

How can the current Palestinian leadership honestly say it will pursue peace when previous leaders rejected an offer to create a Palestinian state just a few short years ago and now refuse to live up to their responsibilities as outlined in the Road Map?

This is surely a reference to Barak’s so-called “generous offer” of 2000, one of the three “serious negotiations” Ross now taunts Abbas with and also one of the many myths Israelis and their stooges love to peddle. The West Bank and the Gaza Strip, seized by Israel in 1967 and occupied ever since, comprise just 22 per cent of pre-partition Palestine. When the Palestinians signed the Oslo agreement in 1993 they agreed to accept the measly 22 per cent and recognise Israel within “Green Line” borders (i.e. the 1949 Armistice Line established after the previous year’s Arab-Israeli war). Conceding 78 per cent of the land that was originally theirs was an astonishing compromise.

But it wasn’t enough for greedy Barak. His “generous offer” required the inclusion of 69 Israeli settlements within that 22 per cent remnant. It was plain to see on the map that these settlement blocs would create impossible borders where Palestinian life in the West Bank was already severely disrupted. Barak also demanded the Palestinian territories be placed under “Temporary Israeli Control”, meaning Israeli military and administrative control indefinitely. The “generous offer” also gave Israel control over all the border crossings of the new Palestinian state. What nation in the world would accept that? The map, never shown publicly, revealed the preposterous reality of Barak’s offer, but the truth was cunningly hidden by propaganda spin.

The following year at Taba, Barak produced a revised map but it was withdrawn after his election defeat. Don’t take my word for it – the facts are well documented and explained by organisations such as Gush Shalom.

The only thing this and the many other “peace” exercises achieved was a deep distrust of any pretence of good intentions by Israel.

David Makovsky, a Fellow at Ross’s Washington Institute, says of Abbas’s move: “Internationalising the conflict will have only one surefire result: making the prospects of Israelis and Palestinians resolving their own differences ever more distant.” After decades of brutal oppression during which the Palestinians have continued to be dispossessed and murdered, does he not think those prospects are distant enough?

Makovsky adds that the Palestinian Authority “has torpedoed any chances for near-term diplomacy” and “invited US financial countermeasures” merely by opening the International Criminal Court door. Once again the policy wonks in Washington are warning defenceless people criminally abused by America’s ally that seeking justice under the law is counter-productive. What a sad, sad world they are creating.