The Gaza conflict is the poster child for America and Europe’s inability to ‘fix’ the Middle East. Any I$raHell/Hamas cease-fire deal will at best be an interim one, hostage to the broader impasse in the peace process. 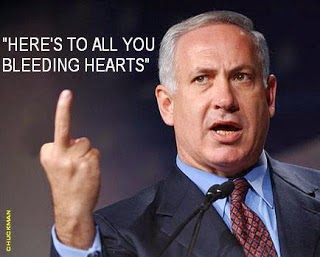 Like so many of the muddled and confused problems in the angry and dysfunctional Middle East these days, the Israeli-Gaza crisis seems destined for a muddled outcome too rather than a determinative solution.

Americans – and the Europeans too – need to adjust their obsessions for comprehensive, definitive, let alone happy, Hollywood endings, to so much of what ails this region today: from the Arab Spring to Israeli-Palestinian peace. Indeed, they need to come to grips with one essential reality. They’re stuck in a region they can neither leave nor transform. And that leaves only one course of action: Managing as best they can. And Gaza is the poster child. Here’s why:

At least four parties have primary equities in how Gaza is resolved: Israel, Hamas, the Palestinian Authority and Egypt. Two of those parties don’t talk directly with one another (Israel and Hamas); two more, despite a unity accord, have major disputes (the PA and Hamas); and two others are engaged in serious tug of war (Egypt and Hamas). As if this were not enough, you have at least four different mediators – the U.S., Egypt, Qatar and Turkey, none of whom are entirely on the same page and most of whom at least one of the combatants doesn’t trust. Throw in a kinetic conflict that brings new deaths and destruction each day and add angry and aggrieved publics who won’t or can’t push for de-escalation, and you have a witches’ brew of problems that don’t offer up quick or easy solutions.

As bad as the situation is, particularly for Palestinians in Gaza, neither Hamas nor Israel feels the kind of pain (yet) or prospects of gain to stand down.

On the Israeli side, the Iron Dome has effectively blunted the threat from Hamas’s high-trajectory weapons. The limited nature of Israel’s ground incursion so far has diminished IDF casualties. What’s more, the Israelis want to try to reach an outcome that hands Hamas a strategic defeat and severely weakens its military wing. That means destroying tunnels, rockets and killing fighters. In short, the Israelis don’t appear to be done. They may even be considering a broader ground incursion.

As for Hamas, it appears to believe it can continue to hold out and win politically by just surviving and allowing the asymmetric nature of the casualties on the civilian side – 1,000-plus to three – to blacken Israel’s name. Opposition by many Gazans to the death and destruction of the past three weeks may force Hamas to deescalate at some point. But that doesn’t appear to be the case yet. That Hamas fighters have inflicted three times the number of casualties on the IDF than in the previous two rounds (2008/9 and 2012) suggests that Hamas is far from done too.

Part of the challenge in this round is the fact that both Israel and Hamas have climbed up very high trees. Hamas has talked about lifting the siege of Gaza and the Israelis have identified demilitarization as their major objective. Neither of these things seem possible in the current situation. Israel’s discovery of the terror or attack tunnels have stunned the Israelis and will make them doubly vigilant when it comes to importing potentially dual use items into Gaza. And whatever deal is eventually made will be gradual and phased, not transformative. Nor given Egypt’s hostility to Hamas will it ease up dramatically on its restrictions on crossing through Rafah, the most important pedestrian passageway out of Gaza. As for demilitarization, unless the Israelis are prepared to do it themselves – forcibly disarming Hamas through permanent reoccupation of Gaza and a massive campaign – nobody else will. Hamas’ distinctiveness as an organization rests on its capacity to resist and attack Israel. And it’s not going
to give that up. Nor is the rather feckless international community willing or able to achieve that goal through diplomacy or force.

Fourth, what about the peace process?

Any durable solution the Israel-Hamas stand-off would require a dramatic change in the broader challenge of how to end the Israeli occupation and produce a two-state solution. And that seems no closer today than it has been over the past decade. Palestinian President Mahmoud Abbas seems weaker today as Hamas’ image has risen. The gaps on the core issues between Abbas and Israeli Prime Minister Benjamin Netanyahu are large and unbridgeable on the core issues such as Jerusalem and refugees. And there’s no trust. America’s image – already low as a result of John Kerry’s failed effort to produce an agreed framework for negotiations – has taken another hit with his stumbles on the current cease-fire negotiations. Whatever deal may be reached between Israel and Hamas will at best be an interim one and always held hostage to the broader impasse in the peace process.

So what is possible?

Think transaction not transformation. Barring some element that fundamentally changes the equation – an Israeli decision to reoccupy Gaza, or the eruption of a third intifada on the West Bank – at some point both Israel and Hamas will calculate that standing down is better than continuing. Only then will the mediators be able to produce some form of negotiated ceasefire.

Such an arrangement will have to find a way to ease the closure of Gaza, deliver economic benefits and greater freedom of movement for Gazans, paying Hamas salaries, and donor aid to help reconstruct Gaza, while satisfying the Israelis that the tunnels will not reopen, perhaps by using international monitors, and that Egypt and others will continue to block smuggling and supply of high trajectory weapons for Hamas.

It’s not perfect. But it may be functional and perhaps more durable that the short-lived November 2012 Egyptian-brokered accord. Crisis can at times produce bigger and more ambitious solutions. And one can always hope. But nobody ever lost money betting against it in the Middle East. And chances are, it’s a safe bet still.