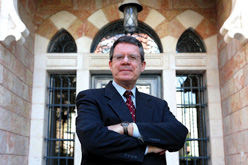 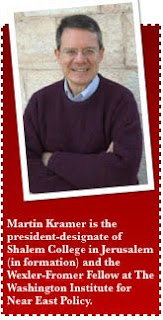 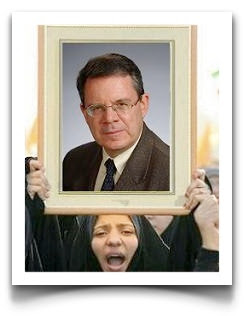 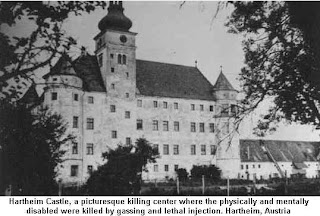 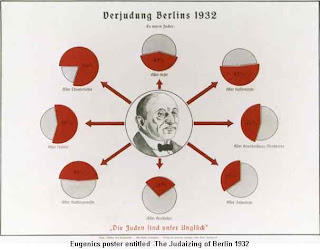 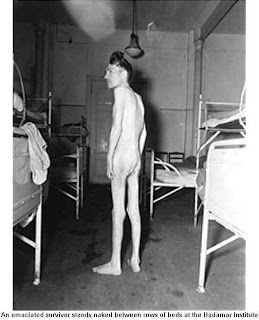 Martin Kramer is President-Designate of Shalem College as well as being a fellow of Harvard University, alongside fellow racist, Alan Dershowitz. Shalem College is supposed to be Israel’s first ‘liberal’ arts college. Clearly the Israeli and non-Israeli definition of ‘liberal’ have different meanings.
As the excellent article on Electronic Intifada makes clear, the Kramer’s (& most of Israel’s) definition of liberalism is confined to Jews. Palestinians should make themselves scarce and preferably their women should be ‘encouraged’ not to give birth.
Well you couldn’t make it up. As you might have guessed there are historical precedents to Kramer’s racist outpourings.
On July 16, 1941, Hugo Höppenerner, a Higher SS and Police leader in the Warthegau (the part of Poland annexed to Germany), wrote to Adolph Eichmann (Documents of Destruction – R. Hilberg, Quadrangle Books, Chicago, 1971, p. 87).
Höppenerner’s suggestion as to how to solve the ‘problem’ of not being able to feed all the local Jews was quite simple – kill them! And for those for whom it was not possible or necessary, i.e. Jewish workers, then the alternative solution that was put forward was that of sterilisation of Jewish women.
This ‘solution’ that was put forward repeatedly as an alternative to the use of the gas chambers, but because of technical problems it wasn’t possible to use to ‘solve’ the Jewish question. That is it wasn’t possible to sterilise quickly enough the necessary millions of Jews.
In any case the Hereditary Health Courts of Nazi Germany regularly ordered the sterilization of Germans, over 400,000 of whom were held to be mentally and physically defective. In the case of the Jews, resort had to be had to the use of gas.
Enclosed is a memorandum on the results of various discussions held locally in the office of the Reich Governor.

Subject: Solution of the Jewish question 4) This winter there is a danger that not all of the Jews can be fed anymore. One might weigh honestly, if the most humane solution might not be to finish off those of the Jews who are not employable by means of some quick-working device. At any rate, that would be more pleasant than to let them starve to death. 5) For the rest, the proposal was made that in this camp all the Jewish women, from whom one could still expect children, should be sterilized so that the Jewish problem may actually be solved completely with this generation.

Fast forward 70 years and a ‘fellow’ of Harvard University Martin Kramer (the alma mater of fellow racist, Alan Dershowitz – do they breed fascists and racists at Harvard these days?) puts forward proposals to sterilise the Arabs of Greater Israel. Yes I know, birds of a feather and all that!
Below we reprint an excellent article on Electronic Intifada.
Harvard Fellow Calls for genocidal measure to curb Palestinian births
Report, The Electronic Intifada
22 February 2010
A fellow at Harvard University`s Weatherhead Center for International Affairs, Martin Kramer, has called for `the West` to take measures to curb the births of Palestinians, a proposal that appears to meet the international legal definition of a call for genocide.
Kramer, who is also a fellow at the influential Washington Institute for Near East Policy (WINEP), made the call early this month in a speech at Israel`s Herzliya conference, a video of which is posted on his blog (`Superfluous young men`)
In the speech Kramer rejected common views that Islamist `radicalization` is caused by US policies such as support for Israel, or propping up despotic dictatorships, and stated that it was inherent in the demography of Muslim societies such as Yemen, Iraq, Afghanistan and the Israeli-occupied Gaza Strip. Too many children, he argued, leads to too many `superfluous young men` who then become violent radicals.
Kramer proposed that the number of Palestinian children born in the Gaza Strip should be deliberately curbed, and alleged that this would `happen faster if the West stops providing pro-natal subsidies to Palestinians with refugee status.`
Due to the Israeli blockade, the vast majority of Palestinians in Gaza are now dependent on UN food aid. Neither the UN, nor any other agencies, provide Palestinians with specifically `pro-natal subsidies.` Kramer appeared to be equating any humanitarian assistance at all with inducement for Palestinians to reproduce.
He added, `Israel`s present sanctions on Gaza have a political aim — undermine the Hamas regime — but if they also break Gaza`s runaway population growth, and there is some evidence that they have, that might begin to crack the culture of martyrdom which demands a constant supply of superfluous young men.` This, he claimed, would be treating the issue of Islamic radicalization `at its root.`
The 1948 UN Convention on the Prevention and Punishment of the Crime of Genocide, created in the wake of the Nazi holocaust, defines genocide to include measures `intended to prevent births within`a specific `national, ethnic, racial or religious group.`
The Weatherhead Center at Harvard describes itself as `the largest international research center within Harvard University`s Faculty of Arts and Sciences.` In addition to his positions at Harvard and WINEP, Kramer is `president-designate` of Shalem College in Jerusalem, a far-right Zionist institution that aspires to be the `College of the Jewish People.`
Pro-Israel speakers from the United States often participate in the the Herzliya conference, an influential annual gathering of Israel`s political and military establishment. This year`s conference was also addressed by The New York Times columnist Thomas Friedman and, in a first for a Palestinian official, by Salam Fayyad, appointed prime minister of the Ramallah-based Palestinian Authority.
Kramer`s call to prevent Palestinian births reflects a long-standing Israeli and Zionist concern about a so-called `demographic threat` to Israel, as Palestinians are on the verge of outnumbering Israeli Jews within Israel, and the occupied Palestinian territories combined.
Such extreme racist views have been aired at the Herzliya conference in the past. In 2003, for example, Dr. Yitzhak Ravid, an Israeli government armaments expert, called on Israel to `implement a stringent policy of family planning in relation to its Muslim population,` a reference to the 1.5 million Palestinian citizens of Israel.
Posted by Tony Greenstein at 00:19 0 comments