Home » Post Page » Nazi regime wants a Peace Process: But Only if it’s Doomed to Fail 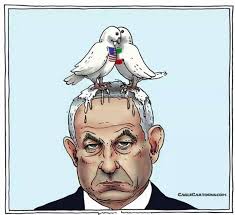 Israel wants a Peace Process: But Only if it’s Doomed to Fail

In a familiar muddying of the waters, Nazi prime minister Netanyahu has spent the past week talking up peace while fiercely criticising Friday’s summit in France – the only diplomatic initiative on the horizon.

As foreign ministers from 29 nations arrived for a one-day meeting in Paris, Netanyahu dusted off the tired argument that any sign of diplomatic support for Palestinians would encourage from them “extreme demands”.

France hopes the meeting will serve as a prelude to launching a peace process later in the year. French president Francois Hollande said he hoped to achieve a “peace [that] will be solid, sustainable and under international supervision”.

With astounding chutzpah, Israeli official Dore Gold compared the summit to the “height of colonialism” a century ago, when Britain and France carved up the Middle East between them. He conveniently overlooked the fact that it was the same British colonialism that promised a Jewish “homeland” in place of the native Palestinian population.

Earlier, Netanyahu and his new defence minister, the far-right Avigdor Lieberman, had publicly committed themselves to an “unceasing search for a path to peace”.

In a two-minute interview on CNN, spokesman David Keyes managed to mention the formula “two states for two peoples” no less than five times.

Rather than the French initiative, Netanyahu averred, Israelis and Palestinians should be left to engage in the kind of face-to-face talks “without preconditions” that have repeatedly failed. That is because Israel, as the much stronger party, has been able to void them by imposing its own conditions.

Netanyahu, it seems, is keen on any peace process, just so long as it’s not the current one launched in Paris.

Part of the reason for bringing Lieberman into the government was to provide more diplomatic wriggle room. With Lieberman cementing Netanyahu’s credentials with the far-right, he is now free to spout vague platitudes about peace knowing that his coalition partners are unlikely to take him at his word and bolt the government.

But while the domestic front has been secured, rumbles of dissent reverberate abroad.

Europe is increasingly fearful that an emboldened Israeli government may soon annex all or major parts of the West Bank, stymying any hope of creating even a severely truncated Palestinian state.

The Paris conference is a sign of the mounting desperation in Europe to restrain Israel.

While France is not about to engineer a breakthrough, Netanyahu is nonetheless worried.

It is the first time Israel has faced being dragged into talks not presided over by its Washington patron. That risks setting a dangerous precedent.

Although US secretary of state John Kerry attended, he was decidedly cool towards the summit. Yet Netanyahu worries that this time Washington may not be able – or willing – to watch his back.

If the conference leads to talks later in the year, that will be when Barack Obama is preparing to bow out as president. Netanyahu is afraid of surprises. Israeli officials have been in near-panic that Obama may seek payback for the years of humiliation he endured from Netanyahu.

One way might be for Washington to agree to French oversight of the talks, following a tight timetable and establishing diplomatic “teams” to solve final-status issues.

Even if negotiations fail, as seems inevitable, parameters for future talks might be established.

Netanyahu also knows that the wider atmosphere is likely to leave him singled out as the intransigent party.

A report by the Quartet, due soon, is expected to criticise Israel for its past failure to take steps towards peace. And a report last week by a joint team of US and Israeli defence experts suggested Israel’s “security concerns” about Palestinian statehood are not as intractable as claimed.

Netanyahu wants instead to deflect attention to a “regional peace summit”. The key has been Egypt’s support for a revival of direct negotiations between Israel and the Palestinians, based on the Arab Peace Plan of 2002. It promised Israel normal relations with the Arab world in return for ending the occupation.

Israel’s sudden interest in the plan is odd, given that it has not been discussed in cabinet since the Saudis unveiled it 14 years ago.

In truth, Netanyahu backs the idea because he knows reaching a region-wide agreement would be impossible with the Middle East in turmoil.

israeli officials have already insisted that parts of the 2002 plan need “updating”. Israel, for example, wants sovereignty over the Golan, Syrian territory it seized in 1967, and which currently promises newfound oil riches.

At the summit, the Saudi foreign minister said Israeli efforts to “water down” the plan would be opposed. Egyptian officials have hurried to distance themselves from the Netanyahu proposal and throw their weight behind the Paris process.

Still, Israel will try to ride out the French initiative until Obama’s successor is installed next year. Then, Netanyahu hopes, he can forget about the threat of two states once and for all.