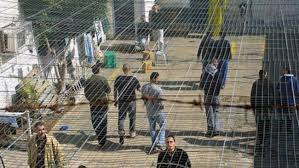 Well, the Israelis do have plenty of experience violating international laws!  So, that might be the reason the U.N. picked Israel to lead its Legal Committee and you couldn’t make this stuff up.
Israel was elected this month to head UN legal committee at the UN with the help of four Arab states (Egypt, Saudia Arabia, Qatar and Jordan) who voted for Israel, even though Israel is notorious for illegality and violating international laws.
Israel is unfit and unworthy of holding such a prestigious status. Here are my 4 good reasons:
1-   Out of over 700 General Assembly resolutions passed since the UN’s 1945 establishment, nearly 450 condemn Israel. In other words, out of 193 nations in the UN, over 60% of all General Assembly resolutions condemned just ONE member: Israel!
2- In 1948, Israel was granted a membership at the UN with the stipulation that Israel will accept UN Resolution 148, which call upon Israel to respect and comply with that resolution. UNR 148 call upon Israel to withdraw from the occupied Palestinian lands and to allow the Palestinian refugees who were forced to flee their lands the right of return to their homes as soon as possible  and to pay compensation for those who do not wish to return. Sixty eight years later, Israel has not honored its commitment.
3- Israel continues to impose illegal and inhumane siege on 1.8 million Palestinians living in Gaza for the last 10 years as a form of punishment for electing Hamas during the 2006 Palestinian election. The Palestinian election was monitored by former US president Carter who himself had certified the election as fair, clean and transparent. Instead, Israel boycotted the result of the election and imposed a blockade on Gaza as a form of collective punishment.
4-  As many as 750 Palestinians are currently under administrative detention, which allows Israel to hold them indefinitely without charge or trial. Administrative detention orders are issued in the name of the military commander of the Israeli occupation of the West Bank. The orders  are issued for one to six month periods on the basis of secret evidence, indefinitely renewable.