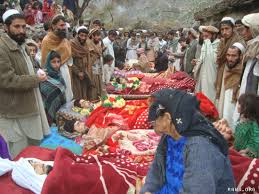 
An air strike called in by NATO-led troops in southern Afghanistan killed 12 children and two women, Afghan officials said on Sunday, one of the worst civilian death tolls by foreign forces in months.

A U.S. Marine base came under fire from insurgents in Taliban stronghold of Helmand on Saturday, the Helmand governor said in a statement, leading the base to call for help from the NATO-led International Security Assistance Force (ISAF).

An ISAF spokesman in Kabul said: “We are aware of the reports that alleged civilians were killed yesterday in Helmand.” He said an assessment team had been sent to the area and would issue its findings shortly.

The mistaken killing of civilians by foreign troops, usually during air strikes or “night raids,” is a major source of friction between Afghan President Hamid Karzai and his Western backers, and complicates efforts to win support from ordinary Afghans for an increasingly unpopular war.

On Saturday, Karzai ordered the Defense Ministry to take control of so-called “night raids,” saying Afghan troops should be carrying out the sensitive operations themselves.

Afghans say the raids, carried out in darkness on houses suspected of harboring insurgents, often lead to civilian casualties.

Bereaved male relatives cradled the bodies of several young children on Sunday, who were wrapped in bloody sheets and placed side to side, and brought them in the back of a truck to the provincial capital, Lashkar Gah, Reuters pictures showed.

”My house was bombarded in the middle of the night and my children were killed … the Taliban were far away from my home, why was my house bombed?” relative Noor Agha told Reuters.

The NATO air strike comes at a time of high anti-Western sentiment in Afghanistan and days after deadly protests by thousands of people against a night raid by NATO troops in which four people, including two women, were killed.

Twelve people were killed during those violent protests and clashes with police in usually peaceful northern Takhar province and more 80 were wounded.

In February, four days of joint operations by Afghan and foreign troops killed 64 civilians in the eastern Kunar province, including many women and children.

That assault followed a NATO rocket attack last July which killed 39 civilians, almost all women or children, in Helmand.

Under a plan agreed by NATO leaders in Lisbon last year, foreign troops will begin handing over security responsibilities to Afghan troops from July, with a plan to withdraw all combat troops from Afghanistan by the end of 2014.

Despite the presence of some 150,000 foreign troops, violence in Afghanistan last year reached its deadliest phase since U.S.-backed Afghan forces toppled the Taliban in 2001, with record casualties on all sides. This year is following a similar trend.

The Taliban this month announced the start of a long-awaited “spring offensive” vowing to carry out attacks, including suicide assaults, on foreign and Afghan troops and government officials.