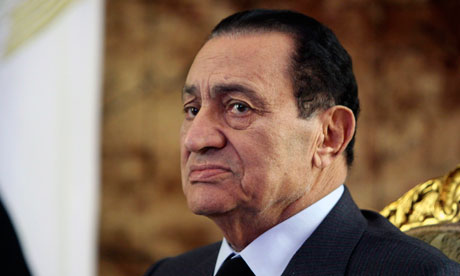 Former Egyptian President Hosni Mubarak suffered a heart attack just moments after being told he would spend the rest of his life in prison, the head of Egypt’s prison service confirmed Saturday.

The general said that Mubarak had suffered the attack upon arrival to the Tora Prison by helicopter and was treated by medical staff. The al-Youm al-Sabaa newspaper reported that his condition had stabilized.

Earlier, Egyptian media outlets reported that Mubarak suffered “a health crisis” upon arrival at prison. “Mubarak was afflicted by a health crisis upon his arrival at Tora Prison and is being treated in the helicopter,” the report said, quoting a medical source, referring to the helicopter that transferred him to the jail.

Egyptian website al Misrawi quoted a security official as saying that Mubarak, 84, refused to get off the helicopter, and that he broke into tears upon arrival at Tora Prison.

Meanwhile, Al-Arabiya TV network reported that Mubarak refused to leave the ambulance that transported him to the prison hospital. According to the report, Mubarak was heard saying “Allah will settle his account with them…I served this country.”

Earlier on Saturday, Mubarak, who governed Egypt for 30 years before a popular uprising toppled him last year, was sentenced to life in prison on Saturday for complicity in the killing of protesters during the January 2011 uprising. Mubarak was acquitted on all graft charges.