Home » Post Page » More to Syria Than Meets the Eye –Major Power Battle Between Kremlin and US Underway, And the Stakes Are High 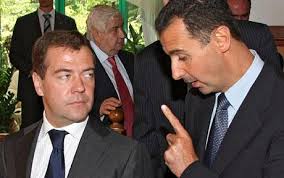 With Saudi, IsraHell and Turkish interests aligning against it, the Kremlin seems in deep water — could it lose its last naval base in the Mediterranean?

June 15, 2011 “Asia Times” — Seldom it is that the Russian Foreign Ministry chooses a Sunday to issue a formal statement. Evidently, something of extreme gravity arose for Moscow to speak out urgently. The provocation was the appearance of a United States guided missile cruiser in the Black Sea for naval exercises with Ukraine. The USS Monterrey cruiser equipped with the AEGIS air defense system is taking part in joint Ukrainian-US exercises, Sea Breeze 2011.

There is nothing extraordinary about a US-Ukraine naval exercise. Last year, too, an exercise took place. But, as Moscow posed, “While leaving aside the unsettled issue of a possible European missile shield architecture, Russia would like to know, in compliance with the Russia-NATO [North Atlantic Treaty Organization] Lisbon summit decisions, what ‘aggravation’ the US command meant by moving the basic strike unit of the regional missile defense grouping being formed by NATO in the region, from the Mediterranean to the East?”

The Foreign Ministry statement then went on to give its own explanation that the Monterrey was sent to European waters as part of the US administration’s phased adaptive approach to building the European segment of the global missile shield. The program’s first stage envisages the deployment of a group of US warships in the Adriatic, Aegean and Mediterranean Seas to protect South Europe from possible missile strikes. The role of the US warship’s missiles in the Sea Breeze 2011 anti-piracy exercises is also unclear, the statement said.

“We have to state that our concerns continue to be ignored and under the guise of talks on European missile shield cooperation, efforts are under way to build the missile shield configuration whose consequences are dangerous and about which we have numerously informed our US and NATO partners,” the Russian statement added.

The US claims that this is a routine naval exercise. On the other hand, Moscow asks: “If this is an ordinary visit, then it is unclear why a warship with this type of armament was chosen to move to this quite sensitive region.”

Without doubt, the US is stepping up pressure on Russia’s Black Sea fleet. The US’s provocation is taking place against the backdrop of the turmoil in Syria. Russia is stubbornly blocking US attempts to drum up a case for Libya-style intervention in Syria. Moscow understands that a major reason for the US to push for regime change in Syria is to get the Russian naval base in that country wound up.

The Syrian base is the only toehold Russia has in the Mediterranean region. The Black Sea Fleet counts on the Syrian base for sustaining any effective Mediterranean presence by the Russian navy. With the establishment of US military bases in Romania and the appearance of the US warship in the Black Sea region, the arc of encirclement is tightening. It is a cat-and-mouse game, where the US is gaining the upper hand.

Ostensibly, the regime headed by Bashar al-Assad is repressive since almost everyday reports are coming out that more bloodshed has taken place. But the Western reports are completely silent as to the assistance that the Syrian opposition is getting from outside. No one is interested in probing or questioning, for instance, the circumstances in which 120 Syrian security personnel could have been shot and killed in one “incident”.

The Western, Saudi, Israeli and Turkish involvement in Syria’s unrest is almost crystal clear but that is beyond the zone of discussion when we speak of “Syria on the boil”. In short, Russia has lost the information war over Syria. Henceforth, its dilemma will be that it will be seen as being obstructionist and illogical when a laudable democratization process is unfolding in Syria and the “Arab Spring” is straining to make an appearance.

Moscow has made it clear that it will not brook a resolution at the United Nations Security Council over Syria, no matter its wording or contents. It also voted against the Western move at the International Atomic Energy Agency (IAEA) last week to open a Syria nuclear file – similar to the Iran file – at the UN Security Council.

Moscow’s dilemma is that it cannot openly explain its side of the US’s geopolitical agenda toward Syria. Any such explanation will expose the hollowness of the US-Russia reset, which the Kremlin under President Dmitry Medvedev assiduously worked for. But Washington is not going to let Russia off the hook either. It is certain to tighten the noose around Assad’s neck.

Put simply, the US wants Russia to leave Syria alone for the West to tackle. But Russia knows what follows will be that the Russian naval base there would get shut down by a pro-Western successor regime in Damascus that succeeds Assad.

The stakes are very high. Last year, the deputy head of Russian military intelligence was killed in mysterious circumstances while on an inspection tour of the naval base in Syria. His body was found floating on the Mediterranean off the Turkish coast. To be sure, many intelligence agencies are deeply embroiled in the Syrian broth.

First and foremost, a regime change in Syria has become absolutely critical for breaking Israel’s regional isolation. The US-Israeli hope is that the back of the Hezbollah can be broken only if the regime of Assad is overthrown in Damascus and the Syrian-Iranian alliance is ended. Again, a regime change in Syria will force the Hamas leadership to vacate Damascus. Hamas chief Khalid Meshaal has been living in Damascus under Assad’s protection for several years.

All in all, therefore, any movement on the Israel-Palestine peace process on Israeli terms will be possible only if the US and Israel crack the hard Syrian nut. Washington and Tel Aviv have been trying to persuade Russia to fall in line and accept “defeat” over Syria. But Moscow has stuck to its guns. And now by sending the warship to the Black Sea, US has signaled that it will make Russia pay a price for its obduracy and pretensions as a Mediterranean and Middle Eastern power.

The parliamentary election result in Turkey ensuring another term for the ruling “Islamist” party AKP (Justice and Development Party) significantly strengthens the US position on Syria. Ankara has hardened its stance on Assad and has begun openly criticizing him. A more obtrusive Turkish role in destabilizing Assad and forcing a regime change in Damascus can now be expected in the coming weeks. Ironically, Turkey also controls the Bosphorous Straits.

By improving ties with Turkey in the past decade, Moscow had been hoping that Ankara would gradually move toward an independent foreign policy. The Kremlin’s expectation was that the two countries could get together and form a condominium over the Black Sea. But as events unfold, it is becoming clear that Ankara is reverting to its earlier priorities as a NATO country and US’s pre-eminent partner in the region. Ankara cannot be faulted: it made a shrewd assessment and drew a balance sheet concluding that its interests are best served by identifying with the Western move to effect a regime change in Syria.

Additionally, Ankara finds it profitable that it identifies with the Saudi approach to the upheaval in the Middle East. The wealth Arabs in the oil-rich countries of the Persian Gulf are willing to send their “green money” to Turkey. Ankara also shares Saudi misgivings about Iran’s rise as regional power.

In sum, the US is slowly but steadily getting the upper hand over its agenda of a regime change in Syria. Whether Moscow will buckle under this immense pressure and accept a rollback of its influence in Syria is the big question. Moscow has threatened to cooperate with Beijing and adopt a common stance over Syria. But Moscow’s ability to counter the American juggernaut over Syria is weakening by the day.

The course of events over Syria will certainly impact profoundly on the US-Russia reset. The Obama administration seems to have done its homework and concluded that it is worth taking that risk for the sake of ensuring Israel’s security. The warship that sailed into the Black Sea carries a blunt message to Russia to accept that it is a mere pale shadow of the former Soviet Union.