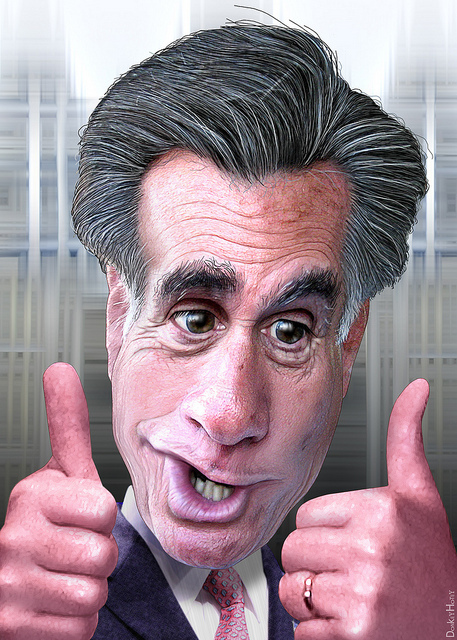 guardian.co.uk
Mitt Romney is to round off his campaign to boost his presidential foreign policy credentials by returning to a cold war symbol of anti-Soviet triumph and western-backed liberty in Poland.
Following a gaffe-strewn visit to Britain, where he queried the Olympic host’s fitness to stage the Games, and after stirring controversy in Israel by calling Jerusalem the Israeli capital and seeming to back unilateral Israeli strikes against Iran, the Republican White House contender arrived on Monday in Poland, where he is to deliver a setpiece speech on democracy and freedom.
The speech on the “values of liberty” at Warsaw University on Tuesday is expected to seek to rekindle the flames of US cold war righteousness by featuring a strong attack on Russia and President Vladimir Putin’s rollback of democratic gains, while also criticising the US president, Barack Obama, for allegedly sacrificing the interests and security of central European democracy in favour of realpolitik with the Kremlin.
Romney has previously described Russia as America’s “No 1 geopolitical foe”, in contrast with Obama, who has sought to press “the reset button” in relations with Moscow.
Romney arrived on Monday in Gdansk, Solidarity’s birthplace, where Soviet communism was punctured 32 years ago. The Republican contender was invited by Lech Walesa, the ex-shipyard electrician, former Solidarity leader and unsuccessful post-communist Polish president. In Gdansk, where affection for US Republican cold warriors is strong and which is home to a Ronald Reagan park featuring a statue of the former president, Romney also met the Polish prime minister, Donald Tusk, a native of the port city.
Romney is expected to seek to use the visit to Gdansk and Warsaw to canvass for the votes of the big Polish diaspora in the US and more broadly for the support of those of east European origin in the US.
Despite the emphasis on the west’s cold war victory and Poland and Solidarity’s pivotal roles in the revolutions of 1989, Romney will find himself in a country that is quickly moving on, less receptive to US rhetoric, seeing its key alliances in the European Union, and dismayed that its traditional attachment to American values and outlook are taken for granted in Washington.
The only country in the EU to escape recession since the financial and then the euro crises erupted in 2008, Poland is thriving at a time of universal European gloom, using a new-found confidence to build European alliances to encourage democratic reforms in neighbouring Ukraine and Belarus and to contest Putin’s proprietorial policies towards parts of the former Soviet Union.
Romney is to see the Polish foreign minister, Radoslaw Sikorski, a previously Americanophile politician who increasingly sees the Polish national interest best served by new European security structures.
“The aim of Sikorski’s meeting will be to get to know Mitt Romney’s position on US foreign policy. Global and regional challenges of key global importance in the near future will also be discussed,” said the Polish foreign ministry.
An Oxford graduate married to an American and previously employed at a neo-conservative US thinktank, Sikorski’s earlier ardent anglophilia and pro-Americanism have been tempered by disappointment with the Obama administration over the US visa waiver policy for Poles, under-appreciation of Polish military contributions in Iraq and Afghanistan, the dilution of US missile defence plans in central Europe, and US policy towards Putin.
The disenchantment with Washington is unlikely to be reversed by a charm offensive and a more hawkish line from Romney. Instead, the Poles are keener to boost European foreign and security policy capacities, using their EU presidency last year to try to push common EU defence policies and running into a British brick wall.
With Sweden, Italy and Spain, the Poles have just launched an initiative for a more robust European foreign policy.