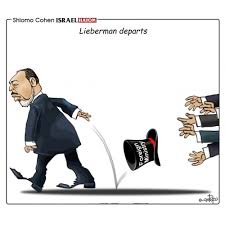 Meet the new Israeli War Minister, Avigdor Lieberman. He is a former night club bouncer from the Republic of Moldova who moved into an illegal Jewish settlement in the Israeli occupied Palestinian West Bank. Minister Lieberman has the following on his resume:
1- He declared on Israeli TV that if appointed as Defense Minister, he will assassinate Hamas leader Ismail Hannyie within 48 hours if the remains of two Israeli soldiers allegedly killed in action are not returned. Never mind that Israel continues to hold the remains of 263 Palestinians for the last several decades. The remains are buried in what is called “number cemeteries,” a euphemism for mass graves. In addition, Israel continues to hold the remains of 85 more Palestinians who were murdered by Israeli Occupation Forces (IOF) since last October. Lieberman also tends to forget that when IOF assaulted Gaza in 2014, the Palestinian resistance led by Hamas was able to shut down the air space over ISISrael for the first time since its creation in 1948. Tel Aviv’s Ben Gurion International Airport was also shut down for days. (Thanks to King Abdullah of Jordan for allowing Israel to use a Jordanian military airbase as an alternate route for landing and takeoff–Not!)
2- In 2001, Lieberman was convicted as a child beater and plead guilty to striking a 12-year-old child. The new Israeli War Minister Avigdor Lieberman is ironically a close associate of Putin, who was once called in 2009 by the late President Hugo Chavez as a “mafia boss.” During that year, Israeli police stated that Mr. Lieberman was being investigated on bribery, fraud, money laundering and obstruction of justice charges.
3- Lieberman said Palestinian citizens of Israel who don’t swear allegiance to Israel should have their heads “chopped off by an ax.” Why does ISIS come to mind?
4- In 2003 when he served as Transportation Minister, he suggested drowning any released Palestinian prisoners by Israel in the Dead Sea, adding that he will provide buses for transportation. This would exceed the alleged Nazi treatment of Jews during WWII.
5- He advocated dropping WMD on Gaza. Does anyone remember how in 2005 the whole world went ballistic when then Iranian President Mahmoud Ahmadinejad was accused of saying, “Israel should be wiped off the face of the earth?” This almost led to a US/Israeli nuclear attack on Iran. In 2012, after seven years of Israeli propaganda, Israel’s deputy Prime Minister Meridor admitted in an Aljazeera interview that “Ahmadinejad was misquoted, and that he never said Israel must be wiped off the map.”  Again, there was no apology issued, nor regret expressed by Israel for its deliberate lie.
6- Lieberman called for bombing Aswan Dam in Egypt to flood the Nile. Again, this moron ignores the fact that Egypt was the first Arab country to recognize IsraHell and without the Egyptian government’s help, ISISrael will not be able to impose an illegal and strangling siege on Gaza.