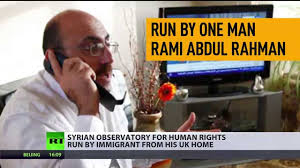 Western media regularly quotes the so-called Syrian Observatory for Human Rights (SOHR) on statistics regarding the current Syrian conflict. Take, for example, this recent article from the Guardian, which reported the “UK-based monitor says dozens have died after [an] attack near [the] border with Turkey.” Referring to the SOHR as a “monitor” or “monitoring group” is a common practice corporate media employs to lend the organization legitimacy.

So who—or what—is the Syrian Observatory for Human Rights?

The truth is stranger than fiction.

At the time of this article’s publication, the official SOHR website has been down for several days. However, an archived version last captured on July 5, 2016, reveals details about the organization. Founded in May 2006, the SOHR is a group of people—not associated with or linked to any political body—that documents the Human Rights situation in Syria. They assert their goals and aspirations are democracy, freedom, justice and equality. The founder and director of SOHR is Rami Abdulrahman, a Sunni Muslim who fled to the United Kingdom after being arrested numerous times in Syria. He never returned.

In December 2011, Reuters provided some insight into how this so-called Observatory, “arguably Syria’s most high-profile human rights group,” operates:

‘Are there clashes? How did he die? Ah, he was shot,’ said Rami Abdulrahman into a phone, the talk of gunfire and death incongruous with his two bedroom terraced home in Coventry, from where he runs the Syrian Observatory for Human Rights.

“[W]hen he isn’t fielding calls from international media, Abdulrahman is a few minutes down the road at his clothes shop, which he runs with his wife.”

According to the New York Times, Abdulrahman relies on four men from inside Syria to help collate and report data from more than 230 activists on the ground. The Times admitted the SOHR is, essentially, “a one-man band” operating out of a “semi-detached red brick house on an ordinary residential street” using the “simplest, cheapest Internet technology available.”

He relies on money from his clothes business, as well as small subsidies from the European Union and one European country he refuses to identify.

According to an interview with RT published last year—in which the SOHR director proved to be very elusive before he was eventually tracked down by the reporter—Abdulrahman acknowledged he personally has not been back to Syria in over 15 years, adding:

But I know some of the Observatory activists through common friends. This organization only takes new members following a six-month trial period and the candidate has to be familiar to someone from the organization or to a reliable outside contact.

To date, his informants remain anonymous, and he is the only individual listed as working for SOHR. Abdulrahman has no journalistic or legal qualifications, is not based in Syria, and relies on phone calls–yet the corporate media quotes his reports without question. This is particularly damning for Russia, as prominent outlets like the International Business Times have released articles treating the SOHR as an authority:

SOHR, which collects information from several ground sources in Syria, in a statement on its website, accused the regime and Russian air forces of bombing areas without distinguishing between the civilian and militant targets.

The ridiculousness of this reporting has been, in turn, chastised by Russia. As stated by the Russian Foreign Ministry through its spokesperson, Maria Zakharova:

“This information appears with reference to the Syrian Observatory for Human Rights based in London. As we all understand, it is very ‘convenient’ to cover and observe what is happening in Syria without leaving London and without the ability to collect information in the field.”

However, it could be the case that Abdulrahman scrutinizes every piece of information from his sources to the best of his ability. It could be the case that his sources are the most reliable sources inside Syria and are not trying to push a particular agenda. However,statements like, “I came to Britain the day Hafez al-Assad died, and I’ll return when Bashar al-Assad goes” seem to suggest the “Observatory” may not always be a neutral source.

But how would we know, anyway? How does the corporate media know to trust these reports?

They don’t, yet they quote this so-called Observatory on a regular basis, peddling a pro-war agenda in the process. The media treats its coverage of Syria like war is a game—as if innocent lives won’t be lost and the repercussions of a war with Syria are not massive.

When did the corporate media become so lazy? The fact that Western media resorts to quoting a t-shirt shop stationed thousands of miles from the Syrian conflict reveals something about the availability of actual evidence, especially when such reports purport to document the atrocities the Syrian and Russian regimes are committing inside Syria. This is not to say Russian and Syrian forces have not caused widespread damage and inflicted suffering on many Syrians. But surely, if the credible evidence existed to support those peddling anti-Assad propaganda, news outlets would likely not use a t-shirt shop in England as a regular source.

That being said, my girlfriend’s family has a barbecue business at the front of their house; perhaps I can start documenting human rights abuses in the Middle East for the establishment media, as well.