In response to the establishment media’s contrived ‘fake news’ crisis designed to marginalise independent and alternative media sources of news and analysis, 21WIRE is running its own #FakeNewsWeek awareness campaign, where each day our editorial team at 21st Century Wire will feature media critiques and analysis of mainstream corporate media coverage of current events – exposing the government and the mainstream media as the real purveyors of ‘fake news’ throughout modern history…

Understanding the complex relationships that make up human endeavors permeates every aspect of society and politics. The ability to be informed about events is a basic motivation to search out news about what is exactly happening in the world we all live in.

Journalism purports to report the first draft of history. In practice, the press and media coverage is systemically bereft of relevant facts and completely void of objectivity. The currency of the realm is trust for all journalists. Their collective credibility is bankrupt for a very simple reason; their newscasts are based upon lies, newspeak and intentional deception. 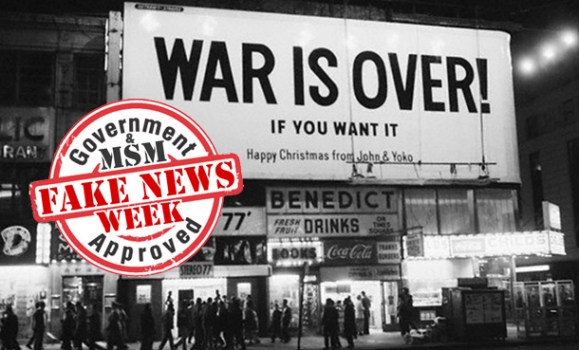 Carlin Romano in We Need ‘Philosophy of Journalism’, asks an essential question that is not at all addressed by the Fourth Estate: “How can it be that journalism and philosophy, the two humanistic intellectual activities that most boldly (and some think obnoxiously) vaunt their primary devotion to truth, are barely on speaking terms?”

Essentially, every component of the mainstream media multiplex is foremost a business. The business model is to operate under the aegis of monopolies. Even a casual observation of the interlocking ownership of big media must acknowledge that the concentration of likeminded Oligopolists are in unison to construct a consortium of predisposed narratives that has nothing to do with seeking the truth.

When the term Pressitude is used to characterize the profession, the uninformed or limited literate news consumers often find comfort in turning on their network disinformation program. Those who take pride in obtaining their news from ‘papers of record’ like the New York Times and the Washington Post rely upon a different motivation. Their aversion to any source that contradicts the establishment worldview is so painful to consider that they adopt a feeble rationalization for self-preservation, which demands rejection of any argument, verifiable facts or documented evidence that challenges their scripted storyline of reality.

The example of Sharyl Attkisson, and Judith Miller, have been treated differently by their own employers. The first demonstrating courageous investigative reporting; whereas the second produced a fabricated account that deceived the public about nonexistent WMDs in Iraq. Attkisson was ostracized, while Miller is now a FOX News contributor.

Miller’s Pulitzer Prize, awarded while employed by the NYT – is no badge of honor. The term “Yellow Journalism” is most closely associated with Joseph Pulitzer and William Randolph Hearst. Their sensational duelling newspapers and extra editions shared the “Fake News” prototype during the late 19th century and early 20th century. What once was conveyed by a cartoon image is now a 24/7 cable news cycle. Granted, the 21st century is different, but the spin and outright lies follow the same pattern of misinformation. Deception, falsification and distortion are absorbed as nonchalantly as a My Pillow advertisement that inundates the propaganda that masquerades as news.

The orthodox version of American media journalism was crafted under the guidance of William S. Paley of CBS, setting the highest standard for news reporting at that time. Names like Edward R. Murrow, Elmer Davis, William L. Shirer, Charles Collingwood, Howard K. Smith and Eric Sevareid are icons in the industry. For those who contend that this era invented “The most trusted man in America” Walter Cronkite, one must not forget that the broadcast news division ran budget deficits, while the parent network was most profitable.

Yet for all the celebrated accolades that CBS News coveted, the underlying message behind the script was Edward Bernays’ propaganda. Fast forward to the internet age and you find that these one-time news bureaus no longer control their monopoly over the news cycle.

Immediacy in information dissemination no longer guarantees accuracy in the report anymore than corporatist editing ensures the believability of the popularly accepted viewpoint. Nevertheless, the predominant originator of “Fake News” comes from a far more sinister source; government brainwashing. Indeed, at the very core of vast news media apparatus are state-sponsored operatives and embeds. Any pretense that there is any independence within establishment media outlets is a symptom of the chronic idiocy within the popular culture. Inserting the government fake news version, using unreliable sources to shape an echo chamber of official fiction is the paradigm for mass indoctrination. Controlling gatekeepers to filter out any conflicting accounts uses both covert and overt censorship. The flagship news purveyors devote their resources to discredit genuine freelance reporting from any ideological perspectives. Mainstream Media (MSM) has the mission to smear any alternative news source and label them as disrepute journalists.

The American Press Institute states that Journalism’s first obligation is to the truth. Then refines this criterion by adding conditionality to the standard: “Journalism does not pursue truth in an absolute or philosophical sense, but in a capacity that is more down to earth.”

By inserting a subjective value element, any reasonable expectation that the work product is trustworthy is suspect. It becomes the task of the reader or viewer to critically analyze the underlying bias and intention to inculcate the culture.  When Marshall McLuhan coined the phrase, “The medium is the message,” he was foreseeing the extent of the newspeak affixed within the medium was not fully appreciated.

Corporations select journalists for their adherence to nihilism in reporting. The MSM’s denial of objective facts and practicing deception by generating actual fake news has produced generations of naïve, ill-informed and confused souls – placing a purdah veil over the heads of trendy clones, fostering the shearing of the sheeple society.

Escaping this planet of press corps apes requires a withdrawal from the sophism. The coordinated accusations of “Fake News” attacks by the dinosaur media upon autonomous internet reporting is a sure sign that suppressing truth to power is the only storyline that matters to these secular relativists and muckraking crusaders to maintain their stranglehold on headline sound bites.

The selection agenda which determines what constitutes news is an editorial function that bears witness to the parameters for public conditioning. All other reporting is declared as ‘conspiracy theory.’ Even a casual assessment of the foreign press provides a contrast to the perception spin machine from K Street or Madison Avenue. As the monopoly media manipulation resorts to their faux news narrative, astute observers understand that their broadcast lies are the real Fake News.