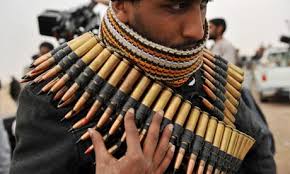 Libya’s puppet’s National Transitional Council (NTC) is ready to recognise the Zio-Nazi regime, according to French philosopher Bernard-Henri Lévy, who says he has passed the message on to Zio-Nazi Prime Minister Benjamin Netanyahu.

The NTC “will be concerned with justice for the Palestinians and security for Israel” if it takes power, Lévy said after meeting Zio-Nazi Netanyahu Thursday.

“The future regime will maintain normal relations with other democratic countries, including Israel.”

Zio-Nazi Netanyahu’s office confirmed the meeting with Lévy but did not comment on the discussion. “The prime minister likes to meet intellectuals,” a spokesperson said.

Lévy, who helped persuade France to be the first country to recognise the NTC, visited the rebel-held Libyan city of Misrata last weekend and went on to Jerusalem this week.

Mohamar Kadhafi’s regime refused to recognise the Zio-Nazi regime of IsraHell, even after Egypt Zionist puppet Anwar Sadat peace treaty with the country in 1979.