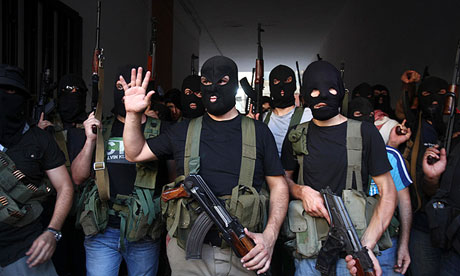 www.guardian.co.uk
A country born out of crisis and hewn ever since by uncertainty takes a lot to unsettle. But more than 20 years after its civil war ended, Lebanonis again being forced to confront one of its most pervasive fears: sectarian kidnappings.
More than 20 people were kidnapped on Wednesday including a Turk, a Saudi and several Syrians, by members of a prominent Shia family, the Mikdad clan, from the Bekaa valley, not far from the Syrian border.
The men were seized in retaliation to the kidnapping in the past few days of one of their own inside Syria, Hassan Salim al-Mikdad. His captors insist Mikdad is a member of the Lebanese militia and political bloc Hezbollah, a claim the group has strongly denied.
The Mikdad family also confirmed it had kidnapped a Turkish national soon after he arrived at Beirut airport. The man’s passport was later given to a local TV station, which broadcast an image. However, Turkish officials are yet to shed light on the claims.
Saudi Arabia, Qatar, the UAE and Kuwait responded to the mass kidnapping by telling their citizens to leave Lebanon immediately.
Wednesday’s developments, and the forced videotaped confessions that accompanied them, have stirred the ghosts of a past that most Lebanese are trying hard to forget. The turmoil in neighbouring Syria is showing that the civil war-era enmity, long since disavowed in Lebanon, remains more of a problem than many here want to acknowledge.
And so, too, do the issues that have plagued Lebanon since its own savage 15-year conflict ran out of steam: a political class that remains implacably divided, a government that cannot assert its sovereignty and an entrenched system of sectarian patronage that cannot allow a representative nation state to rise from the ruins of war.
“I don’t want it to become like 1985 again,” said Sajida Fahm, in central Beirut. “People want the Sunnis and the Shia to fight again. We can’t be led around like this. Where is the state?”
As the Syrian uprising has morphed into full-blown civil war, Lebanon has been fruitlessly looking for ways to safeguard itself from what many people believe will be an inevitable spillover. The giant police state to the east was seen by some Lebanese as a pillar of stability – despite the enormous influence that was inevitably yielded to Syrian officials.
With Syria now teetering, there is a growing fear among all layers of Lebanese society that nothing can be done to save the country from turmoil. And this time, say many Lebanese from all walks contacted in recent weeks, it feels different to the lead-up to the civil war, or any phase of it from its eruption in 1975 to its gradual end in 1990.
Even members of the Lebanese establishment, long accustomed to the byzantine ways of the region and the vagaries of life in a rough neighbourhood, say a potentially historic – and dangerous – shift is underway.
“This is the unravelling of the Sykes-Picot agreement,” said Walid Jumblatt, the leader of Lebanon’s Druze sect, in reference to the secret agreement between the British and French in 1919, which carved up the Levant into spheres of influence in the wake of the Ottoman empire’s demise. “We are seeing the end of what was created 90 years ago. The consequences will be very, very, grave unless they are managed properly.”
Syria was stitched together as a nation state between the end of the first world war and the start of the second. And Lebanon’s development as a country followed roughly the same timeframe.
However, neither state – and especially Lebanon – has ever been truly comfortable in its own borders, or skin. Both are patchworks of sects that have often been at odds with each other and which are very much affected by regional dynamics.
“These agreements are breaking down,” said Jumblatt. “The Alawites could move into the north of their country and establish a homeland near Latakia and that would change the situation in Lebanon hugely.”
Lebanon’s Shias, for decades a minority but now more of a demographic force, are aligned to Syria’s Alawites, who are regarded as an offshoot of Shia Islam. Hezbollah, the political bloc that represents most of Lebanon’s Shias, is heavily invested in the survival of Syria’s leader, Bashar al-Assad, as is the regional Shia heavyweight, Iran.
A potential partition of either country would be a seismic change in the regional dynamic. “There needs to be urgent action,” Jumblatt said. “If it doesn’t happen, who knows what the consequences could be.”
From Beirut’s elite, but now largely empty, downtown shopping district to south Lebanon’s Shia villages,, it is difficult to find anyone who does not fear what the next six months hold for Lebanon, or to find agreement on who is to blame.
“Something is coming,” said Tamir Ali, in the southern city of Tyre. “It will have to break somehow. It could be the Israelis, it could be the Americans, who knows?”
A senior political adviser in Beirut said he feared that Lebanon’s much-vaunted resilience may not be able to withstand many months more of tension – let alone a rewriting of the region’s boundaries.
“The Shias and Sunnis don’t want to fight each other,” he said. “I’m convinced of that.
“But where is this leading us? And who can slow the momentum?”