The United States is hosting the G8, NATO and the Bilderberg Group in a two-week span, during which elite Russian troops will be occupying key points near Northern Command (NORTHCOM), and it isn’t hard to imagine another 9/11 coming from such a sinister combination of brains and brawn.

Starting with the premise that a false flag attack by the end of May is more likely than not, I’ll present the odds for the top targets and most dangerous days, then evaluate the various entities and individuals likely to be involved.

The top U.S. targets are:

The most likely attack days are:

The probable perpetrators are:

The United States, which in 1962 considered implementation of Operation Northwoods, according to ABC News. It was a false flag plan, prepared and proposed by the Joint Chiefs of Staff, based on the targeting of both the military and civilians to provoke a war against Castro’s Cuba.

Israel, which had its fingerprints all over 9/11, according to the four-part Fox News investigative story Israeli Spy Ring,. The Dec 2001 story, which the network soon purged from its files, asserted that Israeli intelligence and demolitions operatives were involved, and that federal investigators had been told not to investigate the matter. The Jewish Nation’s position is pretty much summed up in the May 6 JTA article: Obama should be more explicit about strike.

The United Kingdom, which was conducting terror training during the 2005 G8 meeting when the 7/7 attacks occurred in London. The “training” scenario was exactly what happened, according to exercise participant Peter Power’s BBC interview, given just hours after the event. 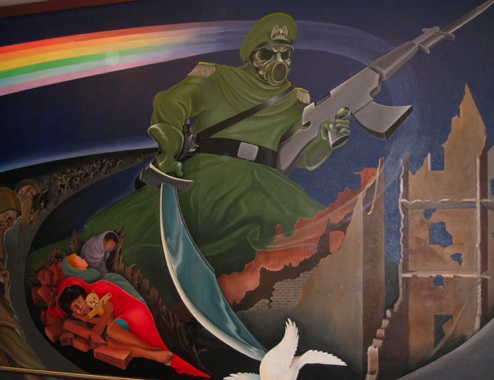 Russia, which has sent an unspecified number of its elite airborne troops to participate in terror training in and around U.S. Northern Command (NORTHCOM), May 24-31. The unsettling scenario is: Russian Troops to ‘Seize CIA Facility’ in Elaborate War Games on U.S. Soil. This will be the first-ever operation by Russian soldiers in America, and public affairs officers are doing their best to downplay it, but it doesn’t pass the smell test for Cold Warriors — even the Russian ones.

There has been a precedent for U.S./Russian military counterterrorism cooperation. On Aug 8, 2010, this headline appeared: Russian, US Air Forces defend commercial aircraft in first-ever joint exercises. A day later, during the exercise and inside the exercise parameters, this headline followed: Former senator Ted Stevens dies in a plane crash.

At present Russia is playing the spoiler to Western geostrategy, from supporting Iranian and Syrian sovereignty to opposing the development of a U.S. missile shield in Europe. All the tensions invite a breakthrough, like the sudden alliance between the Soviet Union and Germany in 1939, which entailed the invasion and partition of Poland by Hitler and Stalin.

The most puzzling question in the minds of Russian military analysts is why the Americans are using Russian airborne troops to be the “protectors” of these vital US intelligence resources instead of the “aggressors” as has always been the case historically. One speculation in this report, however, does note that the scenario to be played out in late May, in Colorado, as planned by the Americans, does, indeed, mirror similar plans of the Russian General Staff of actions to be taken in the case of sudden civil war where “outside forces” would be called upon to protect the government from overthrow by internal forces or armed rebellion by the military.

The G8, which control most of the world’s wealth. They met at Camp David May 19-20, after the Obama administration to move them from their host city of Chicago: G8 summit moved to Camp David last-minute. Students of terrorism will recall that the same G8 was having its 2005 meeting in the UK when the London bus bombings happened. Has the 2012 meeting been a pre-attack strategy session?

NATO, which conducted a false flag mass murder program, Operation Gladio, during the Cold War, according to the New York Times. Gladio carried out assassinations and bombings, putting the blame on left-wing terrorist groups in an attempt to keep public opinion in favor of the military alliance.

The Bilderberg Group, which is comprised of more than 100 of the international elite. It will be meeting in Virginia May 31 – June 3, under a rigidly enforced media blackout, to consider (some say control) the course of world events. 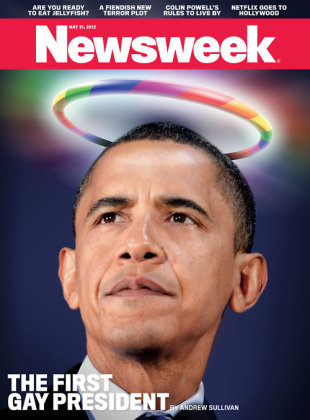 Barack Obama, who has skeletons in his closet, making him susceptible to blackmail. In fact, in the topsy-turvy post-9/11 world, he was probably selected as president because he could be controlled, making him a mere operative of the powers that be. In my article last week, Chicago’s First False Flag “Barack Attack”, I demonstrated that the notorious Dead Chimp editorial cartoon, published on Feb 18, 2009, was directed at Obama for a Chicago false flag foul-up. The impending Barack Attack is better-prepared:

The immediate threat against Obama is hidden in plain sight, on the cover of the latest issue of Newsweek. There, for millions to see, is a picture of the president, multi-colored halo above, with the provocative caption “OUR FIRST GAY PRESIDENT.” It’s at best poor payment for Barack’s coming out in favor of gay marriage, a cause dear to the media. At worst it’s a not-so-subtle threat to “out” the president for past or present homosexual or bisexual behavior, the kind of ruinous charge that most men would do anything to avoid.

Rahm Emanuel, whose loyalty to his country is paramount, and who will do anything to serve its interests. Unfortunately for Chicagoans, that country isn’t the United States. His Israel-first credentials are impeccable: his father was a member of the Jewish terrorist Irgun, and Rahm served in the Israeli military during the First Gulf War. Accentuating his desire to be the Rudy Giuliani of Chicago was his selection of a new top cop shortly after coming into office last year: Garry McCarthy’s leadership skills forged in 9/11 aftermath.

The Secret Service, which might check 9/11-style presidential outlawry. At present it’s being blackmailed, its peccadilloes turned into an albatross by a sudden show of morality. Judgment day comes at crunch time: Secret Service sex scandal: Congressional hearing set for May 23. It’s all reminiscent of the Clinton/Lewinsky affair, and in the limelight for both that and now this scandal is Joe Lieberman, who chairs the Senate Homeland Security Committee. Howling and scowling Peter King, who chairs the House Homeland Security Committee, is his sidekick. A couple of months ago the latter chairman fed the media this welcome fodder: We have a duty to prepare for the worst’: Peter King says Iran has hundreds of Hezbollah agents in the U.S.

The FBI, which can be counted on to do everything in its power to facilitate another false flag, as it did with the Oklahoma City bombing and 9/11.

The CIA, which is headed by General David Petraeus. He is officially known for leading U.S. forces in two failed wars, and unofficially for ordering the assassination of his too-scrupulous subordinate, Colonel Ted Westhusing.

Captain May (left) at Gunsmoke exercise in Wyoming, 1990.

Captain Eric H. May is a former Army NCO and officer, with specialties in nuclear, biological and chemical warfare, military intelligence and public affairs. He is also a former NBC editorial writer who has published widely, from Military Intelligence Magazine to The Wall Street Journal. After the invasion of Iraq he undertook a mission of conscience, joining other informed veterans to form Ghost Troop. Since 2004 they have operated to prevent the next 9/11 (9/11/2B). In recognition of their successes, in 2009 The Lone Star Iconoclast published the editorial Captain Eric H. May Deserves Medal Of Honor.