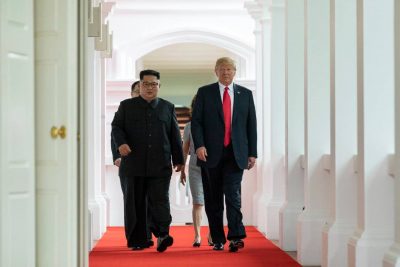 Pro-GMO Activism and Smears Masquerade as Journalism: From Seralini to Jairam Ramesh, Aruna Rodrigues Puts the Record Straight
By Colin Todhunter and Aruna Rodrigues, June 17, 2018
Rodrigues accuses Sandhya Ramesh of dubbing anything that is a proper critique of GMOs based on ‘independent’ science (the distinction is important) as the work of ‘anti-GMO’ activists. She argues that a properly researched piece would have entailed weeks of serious research into the various studies carried out by Seralini and his team over the last decade as well as the reappraisal of Bt brinjal (October 2009 to February 2010) ordered by Jairam Ramesh.

Selected Articles: Peace Is a Cliché

Trump Wants to Free America from “Fool Trade” and Flip the Tables on the EU
By Andrew Korybko, June 17, 2018
Tweeting from Singapore after the failed G7 Summit in Canada, the President wrote that “Fair Trade is now to be called Fool Trade if it is not Reciprocal”, before explaining how Canada and Germany “rip off” the US through their own protectionist tariffs and insufficient contributions to NATO, respectively.

Aftermath of the Trump-Kim Summit: Unilateral Denuclearization, Continued US Military Threats, Economic Sanctions
By Prof Michel Chossudovsky, June 17, 2018
ROK president Moon had demanded the suspension of the US-ROK war games directed against the DPRK to no avail.
Under the US-ROK combined forces command, all South Korean Forces fall under US command. The South Korean president is not the Commander in Chief and cannot under any circumstances veto the conduct of joint war games.

Trump Approves $50 Billion in Tariffs on Chinese Goods
By Stephen Lendman, June 16, 2018
Reportedly Trump met with his trade officials on Thursday, a decision reached to impose around $50 billion in tariffs on a range of Chinese goods – an announcement of the move expected on Friday or early next week.

Drivers Behind the War on Syria and the Impoverishment of Us All
By Mark Taliano, June 16, 2018
To be blunt, Western policymakers seek to destroy secular democracy in Syria, along with its socially uplifting political economy, with a view to installing a compliant fascist Wahhabi government.
The end result is chaos, the enrichment of the transnational “oligarchs” and the impoverishment of Syria.

What’s in Trump’s ‘Deal of the Century’? The Answers Are in Plain Sight
By Jonathan Cook, June 16, 2018
According to Palestinian officials, they are likely to be offered provisional borders over fragments of land comprising about half the occupied territories – or just 11 percent of what was recognised as Palestine under the British mandate.
The Palestinian areas would be demilitarised, and Israel would have control over the borders and airspace.