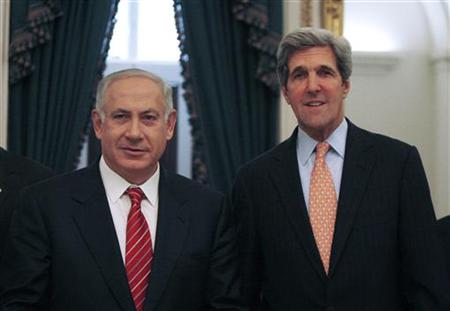 Secretary of state says ‘a lot of countries’ involved in effort; Marine commander explains why lethal aid not being supplied

Times of Israel
American Secretary of State John Kerry appeared to confirm Tuesday in Qatar that the US was conducting off-site training of Syrian rebel forces, and that many nations were involved in the campaign to assist the opposition.
“There are a lot of countries doing training,” he said in an interview with Fox News, noting that the Obama administration was working “to send the signal that we are determined to change [Syrian] President [Bashar] Assad’s calculation.”
Kerry’s statements confirmed a report in The New York Times Thursday that the US was ratcheting up its support for the Syrian opposition in an effort to oust Assad, and had begun training rebels to that end.
Senior American administration officials told the paper that the US was training the rebels at a base somewhere in the Middle East, and would be offering the rebels nonlethal assistance, but not arms.
Marine Corps Gen. James Mattis, the top officer at US Central Command, on Tuesday said that the situation in Syria was too complicated to provide opposition forces with lethal aid. Mattis was concerned that US enemies might wind up with weapons given to the rebels fighting Assad, he said during testimony before the Senate Armed Services Committee, noting that support for the Syrian leader was eroding daily.
Further efforts to bolster anti-regime forces, Kerry said, have been conducted, “with the hope of convincing [Assad] and his allies that the time has come to really negotiate with the transitional government that was created in the Geneva Communique.”
The communique was a proposal — endorsed by Western countries and Russia in June 2012 — to provide a basis for negotiations between Syrian opposition leaders and Assad, though there was no agreement on the specific role Assad would play in such talks.
Asked who was directly training the rebels, Kerry said: “That’s not important.”
The UN estimates that some 70,000 people have been killed and nearly one million people have been displaced during the course of the nearly two-year-long civil war. Many Syrians have complained that the world has not acted to stop the killing and carnage.