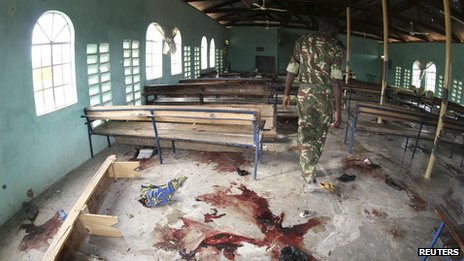 ed note–Christians are attacked in Israel on a DAILY FREAKING BASIS. They are spat upon by Jews, their churches are defaced and firebombed, AND YET we never see any Jewish groups coming forward to offer them protection.

Christian/Islamic solidarity against their common enemy–an idea whose time has come.
bbc.com
Muslim leaders in Kenya have agreed to form self-defence groups to protect churches following a deadly attack on Sunday.
Fifteen people were killed in the raids on churches in Garissa, a town near the border with Somalia.
Kenya’s border region has been tense since it sent troops into Somalia to pursue al-Shabab Islamist militants.
Adan Wachu, head of the Supreme Council of Kenyan Muslims, told the BBC the attacks were acts of terrorism.

“There are people out there who are determined to make Kenya another Nigeria,” Mr Wachu, who also chairs the Inter-Religious Council of Kenya, told the BBC Network Africa programme.

“It’s not going to be allowed to have a sectarian division in this country – whoever wants to do that will of course fail.”
‘United front’
Mr Wachu said that at a meeting the Inter-Religious Council of Kenya on Tuesday it was unanimously agreed the church attacks were acts of “terrorists and terrorism”.
“Therefore we all resolved to stand together as one united front,” he said.
“We decided as solidarity that the Muslim youth will provide a vigilante service to the churches not only in Garissa but in any other places that the Christians may deem fit.”

He said that it was now up to the Muslim leaders in Garissa to organise out how the estimated 30 churches in the town would be protected.
“Muslims felt that because those Christians are a minority in their domain they must be protected at all cost.”
Most of the people living in and around Garissa are ethnic Somalis and Muslims.
Last October, Kenyan troops entered Somalia in pursuit of al-Shabab militants accused of being behind various kidnappings on Kenyan soil and of destabilising the border region.
But since then, al-Shabab, which has joined al-Qaeda, has been blamed for a further string of grenade and bomb blasts across Kenya.
The group’s officials have not responded to accusations that it was behind the Garissa attack.