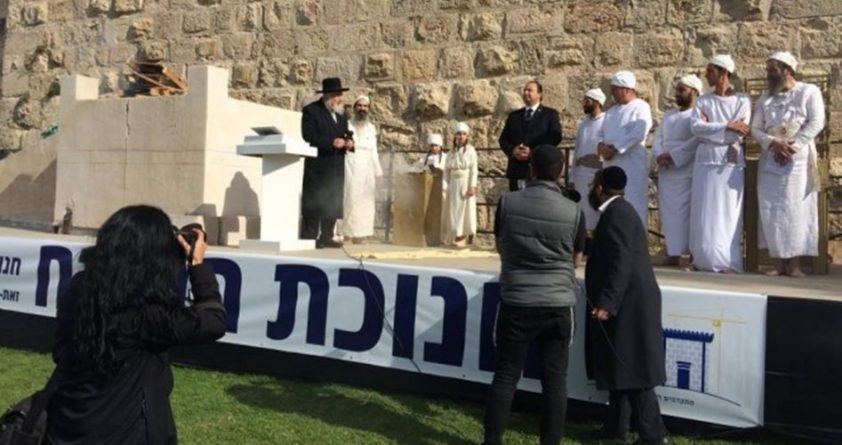 OCCUPIED JERUSALEM – Jewish activists, who hope to see the temple mount built in place of the Aqsa Mosque, unveiled a new altar in Occupied Jerusalem Monday, which they say is intended to be placed in the future on the mount after removing the Mosque and used to offer animal sacrifices.
According to Haaretz newspaper, these activists, who are preparing for a rebuilt temple by recreating some of the ancient tools used in temple rituals, have been practicing, for the past decade, the offering of sacrifices in the days before Passover.

On Monday, the activists wanted to practice using the altar but had to make do with only part of the service because the Israeli Jerusalem municipality refused to let them slaughter an animal in a public park.
“In the end, there will be a grander altar, but for the time being we have this, and the moment they open the gates we’re ready to take it up to the temple mount,” senior temple mount activist Shimshon Elboim told the newspaper.
So far the practice sessions have included slaughtering an animal and offering it on a temporary altar of wood in an area near the western wall of the Mosque
On Monday, the activists wanted to execute the complete ritual of slaughtering the animal and offering it after they received a permit from the police for that, but the municipality’s legal adviser rejected their request to slaughter an animal in a public park outside the Old City walls, thus the sheep earmarked for this purpose was taken to another location to be slaughtered.
“What we still have to do is awaken the people,” Elboim said. “There is slow but sure progress, and if the authorities allow it, tomorrow we can do the whole service.”