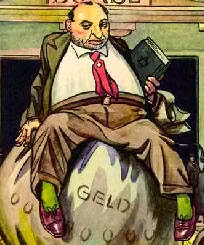 The organized Jewish community, led by the extremely well-funded and highly influential Anti-Defamation League, is constantly warning the world about“rising anti-Semitism”, hysterically raging against and decrying the promotion of “anti-Semitic stereotypes” (no matter how factual or obviously observable those “anti-Semitic stereotypes” actually are). The ADL recently conducted a world-wide survey in an effort to gauge “anti-Semitic attitudes” on a global scale, asking participants whether or not they agreed with “an index of 11 statements that the ADL believes suggest anti-Jewish bias,” according to the Jewish Telegraph Agency. The 11 statements were:

I wrote about the ADL survey a few weeks ago, highlighting the fact that all 11 statements used by the ADL to gauge “anti-Semitic attitudes” are indeeddemonstrably true. Ironically, Jewish news outlets themselves often openly admit and promote “anti-Semitic stereotypes”, and Jewish writers, authors, journalists, and activists regularly expose the true nature of organized Jewry, its immense influence in the Western world, and its over all agenda.

For example, The Jewish Daily Forward recently published an article praising Stanley Fischer, the newly appointed vice chairman of the Federal Reserve System, who is also an Israeli-America dual citizen. Jewish control and influence over international banking and the Federal Reserve is, according to the ADL and other Jewish groups, an “anti-Semitic stereotype”. Yet Jewish news outlets openly report on these facts. Here is the promotional snippet of The Forward’s biographical article highlighting Stanley Fischer which appeared in my email inbox:

The Forward openly indicates or implies that Fischer, a Jewish man with deep ties to the Jewish state of Israel, is the “banker of the world,” invoking an age old Jewish stereotype of Jewish control over global finance and banking.

An editorial recently appearing in The Forward promoted yet another “anti-Semitic stereotype” – the tremendous Jewish influence and control over the American government and political process. Entitled Big (Jewish) Money Can’t Buy Our Votes – So Far, the editorial reads in part: 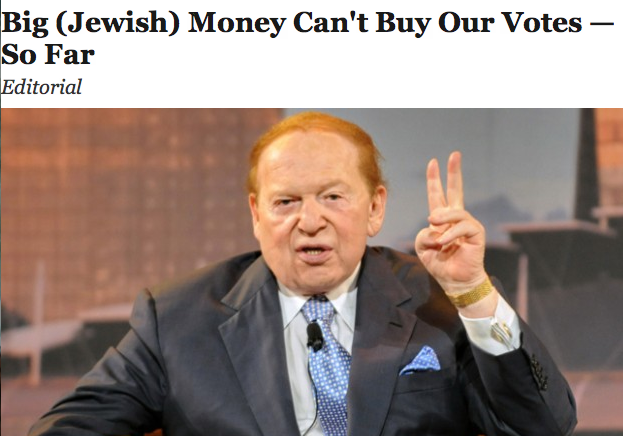 A new book details how a handful of extraordinarily wealthy Americans are manipulating our political system, and how a few Jews play an outsized role in the narrative. […]

The Jewish names in this elite group span the political spectrum, from an outspoken liberal like George Soros to an Obama Democrat like Jeffrey Katzenberg, to the more libertarian Paul Singer, and then to the man who started it all, Sheldon Adelson, whose quixotic and expensive attempt to promote Newt Gingrich in the 2012 GOP primary heralded the beginning of the Big Money wave. […]

Will the ADL be exposing and denouncing The Forward for their promotion of “anti-Semitic stereotypes,” despite the fact that they are factually and obviously true?

The Forward articles were published shortly after The Jerusalem Post released an article highlighting, in The Post’s view, the “top 50 Most influential Jews of 2014”, which Dr. David Duke has correctly described as a “Who is Who out of the Protocols of Zion.” The Post, easily one of the most popular and influential news outlets in Israel, promotes some of the most widespread and well-known “anti-Semitic stereotypes” in the article, including the fact that Jews dominate and essentially control the United States federal government and Federal Reserve banking establishment.

According to The Post, the top two most influential Jews in the world today are Jack Lew, Secretary of the United States Treasury, and Janet Yellin, Chairwoman of the Federal Reserve. Lew and Yellin occupy two of the most prestigious and important positions in American politics and banking. The Post’s brief description of Treasury Secretary Jack Lew reads in part:

JACK LEW is the most powerful Jew in the US administration, the world’s top superpower. Formerly President Barack Obama’s chief of staff, his current post of secretary of the Treasury puts him in one of the key jobs in the executive cabinet: proctoring economic recovery, forecasting future debt, and managing a complex infrastructure of international sanctions. The Treasury, not the Pentagon, would be responsible for the weapon of choice used by Obama against a nuclear Iran, and Lew has been central in shaping the policy.

Controlling the purse strings of the US Treasury, Lew’s proximity to the president, the most powerful person on the planet, is indisputable. […]

His appointment to the Treasury secretary was above else a testament to Obama’s appreciation of Lew’s skills, values and judgment. But it was also an opportunity for Jews in Israel and abroad to delight in the fact that a member of the tribe had climbed to such an influential position in the US.

This is especially true in the case of Lew, a man proud of his Jewish roots and unabashedly committed to his rich tradition. An Orthodox Jew who observes Shabbat, he regularly attends synagogue services. Lew’s former chief on the National Security Council, Sandy Berger, once commented that “Lew’s faith never got in the way of performing his duties.” […]

She was voted No. 2 on Forbes’s list of The World’s 100 Most Powerful Women this year.

Dominated by American Jews over the last 50 years – at least five chairmen have been practicing members of the faith – the position is now held by “one of the nation’s foremost economists and policy makers,” according to US President Barack Obama. […]

The simple fact of the matter is that Jewish news outlets regularly promote “anti-Semitic stereotypes”, and often boast and brag about Jewish influence and power over the Western world, as indicated in the articles cited above. There are many more examples I could cite.

For instance, The Times of Israel, a popular online newspaper in Israel, published an Op-Ed a couple years ago openly promoting the “anti-Semitic canard” that Jews do in fact own and control the mass media – an obvious fact that is hysterically decried and denounced by the organized Jewish community.

Joel Stein, a Jewish journalist, published an article in the Los Angeles Times back in 2008 unabashedly announcing – even bragging – that Hollywood is entirely controlled by Jews. At the end of the article, Stein states that he does not “care if Americans think we’re [Jews] running the news media, Hollywood, Wall Street or the government.” Stein only cares that Jews “get to keep running them.” Once again, here we have a Jew openly discussing and admitting the fact that Jews essentially dominate the West – and he’s proud of that fact. As he states, his only concern is that Jews maintain and perpetuate their dominance over the American government and political system, banking establishment, and mass media.

Organized Jewry is often criticized for promoting “multiculturalism,” “diversity,” and massive non-White immigration into White countries in an effort to destroy traditional Western civilization, which will ultimately result in the genocide of the White race. This “anti-Semitic stereotype” was openly admitted to by a Jewish activist named Barbara Lerner Spectre:

There are countless other examples I could point to, but I think my point has been made: Jewish news outlets routinely promote “anti-Semitic stereotypes” simply by reporting factual information about the nature of Jewish power and influence, and the overall agenda of international Jewry.

The Jews have weaponized language, using terms like “anti-Semite”, “racist”, “bigot”, and “conspiracy theorist” in an on-going war against the public designed to neutralize and eliminate any criticism of the organized Jewish community and its insidious agenda of world domination, which includes monopolization of all political and economic power at the international level and the perversion and ultimate destruction of all natural racial and cultural groups. The “anti-Semitic” slander must be exposed for what it truly is – a trick used to stifle any open, honest discussion of international Jewry and its subversive, parasitic nature.