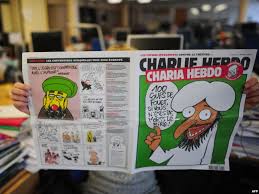 Since 9/11, the imperial playbook has consisted of a favorite and time-tested tactic: the false flag operation.

Carry out or facilitate a spectacular atrocity. Blame it on the enemy of choice. Issue a lie-infested official narrative, and have the corporate media repeat the lie. Rile up ignorant militant crowds, stoke the hatred, and war-mongering imperial policy planners and their criminal functionaries get what they want: war with the public stamp of approval.

Here we are again.

The Charlie Hebdo incident is being sold as the French 9/11. It certainly is, in all of the most tragic ways: France, like the United States on 9/11, has been used. The masses of the world have been deceived, and march in lockstep to NATOs drumbeat again.

All signs lead from French intelligence back to Washington—and Langley, Virginia—directly and indirectly. Red herrings and deceptions comprise the official narrative.

The Al-Qaeda narrative, the classic CIA deception, gets fresh facelift. The fact that Al-Qaeda is CIA-created Anglo-American military-intelligence is ignored. The agenda behind the ISIS war—a massive and elaborate regional CIA false flag operation—registers even less.

The Charlie Hebdo terrorists have ties to Anglo-American intelligence and the Pentagon that the masses do not bother to think about. They are also tied to the (conveniently dead) 9/11-connected Al-Qaeda mastermind/CIA military-intelligence asset Anwar Al-Awlaki. These and other obvious connections to Washington and the CIA do not raise alarm bells among the ardent ones waving Je Suis Charlie signs (which magically appeared, and seem to have been mass-produced in advance).

Signs of an inside job and a still unfolding cover-up are significant, from pristine, undamaged passports found on scene to the convenient suicide of Helric Fredou, the Paris police commissioner in charge of the Hebdo investigation.

The Kouachi brothers and Amedy Coulibaly were not only well known by French authorities, French intelligence and the CIA. The Kouachis were tracked and monitored—guided—over the course of many years, arrested many times, yet were allowed to continue training and plotting with fellow Al-Qaeda in Iraq, Yemen, Syria, etc. These are telltale signs of a guided military-intelligence operation. A blatantly obvious terror cell, known to authorities, drops out of sight, and then set loose at an appropriate moment. And then executed.

None of these things, which alarm seasoned observers, registers among the emotional masses; the lemmings who willfully refuse to address its real source: the architects of Anglo-American war policy.

Only the NATO war agenda benefits from any of this.

Frances 9/11 is more accurately Frances latest Operation Gladio. As noted by Paul Craig Roberts, there is a reason why the Charlie Hebdo attacks took place when it did:

France is suffering from the Washington-imposed sanctions against Russia. Shipyards are impacted from being unable to deliver Russian orders due to Frances vassalage status to Washington, and other aspects of the French economy are being adversely impacted by sanctions that Washington forced its NATO puppet states to apply to Russia.

This week the French president said that the sanctions against Russia should end (so did the German vice-chancellor).

This is too much foreign policy independence on Frances part for Washington. Has Washington resurrected Operation Gladio, which consisted of CIA bombing attacks against Europeans during the post-WW II era that Washington blamed on communists and used to destroy communist influence in European elections? Just as the world was led to believe that communists were behind Operation Gladios terrorist attacks, Muslims are blamed for the attacks on the French satirical magazine.

Now France is militarized, just as the US was in the wake of 9/11. And the French right-wing has newfound cache.

The hostile takeover of the public mind

Notice that the last two false flag operations in recent months—the false flagging of North Korea over Sony and the film The Interview, and the Charlie Hebdo deception—both revolve around the ideas of free speech and free expression.

This is a phantom battle, choreographed by those who could not care less for freedoms. In fact, the masses are being manipulated towards supporting war and mass murder, and police state agendas that specifically curtail freedoms.

What more creative way to take away freedoms than to make people give them up voluntarily?

The hordes of American citizens that supported the war on terrorism to defend freedom got the Patriot Act, which gutted what liberties they had; the Constitution and the Bill of Rights will not be restored. This process continues all over the world. Ask the average uninformed French citizen today suffering from post-traumatic stress, and they will gladly give up their rights, anything so that terrorists are stopped.

Note how the powers that be have taken to inserting their pro-war messages even more forcefully where the ignorant public spends the majority of its time: in popular entertainment. In Hollywood products, in their cartoons, in their magazines, in their celebrities.

Let George Clooney, Seth Rogen and James Franco transmit the messages of war for the CIA and the Pentagon.

It is the CIAs ongoing mission to plant its assets and its propaganda into the media and the arts, controlling the perception of culture as well as framing all debate. It is making a huge push at the moment, relishing the speed and effectiveness of technology and social media.

Hundreds and thousands of innocent lives have been lost in this endless, brutal and criminal war. Yet its architects and functionaries remain untouched.

No Anglo-American war of conquest, no Charlie Hebdo massacre.

No CIA, no Militant Islam, no Al-Qaeda, no ISIS, no Charlie Hebdo massacre.

No 9/11, no war on terrorism, no ISIS deception, no Charlie Hebdo massacre.

No war against Russia, no Charlie Hebdo massacre.

To the naïve ones who believe the lies and march on the streets carrying the signs, you are the victims, the gullible, the dupes, the pawns.