Home » Post Page » IsraHell–the Only Country that has threatened to destroy the entire world with Nukes, yet Peres says world needs missile defense system against Iran 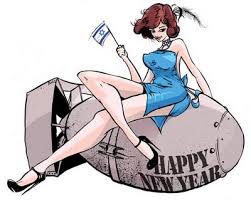 
President Shimon Peres called on Thursday for the creation of a missile defense system that would surround Iran, in an interview with Israel Radio.

The United States, NATO and countries in the region must join forces, Peres said in the interview, adding that all countries in the Middle East, including Saudi Arabia and Egypt, are under Iranian missile threat.

Speaking in Italy, Peres said that he will discuss this matter with his Italian counterparts later on Wednesday. The president will be meeting with Italian President Giorgio Napolitano and other world leaders who have arrived to celebrate the 150th anniversary of Italy’s unity.

Russian President Dmitry Medvedev and Palestinian Authority President Mahmoud Abbas are among those attending the festivities.

Peres’s interview comes a day after former Mossad chief Meir Dagan said that Israel would not withstand a regional conflict ignited by an Israeli strike of Iran’s nuclear facilities, adding that Israel did not have the capability to stop Tehran’s nuclear ambitions, just to delay them.

In his first public appearance since leaving the post in September, Dagan said earlier this month that the possibility a future Israel Air Force attack on Iranian nuclear facilities was “the stupidest thing I have ever heard.”

Speaking during a conference in Tel Aviv on Wednesday, Dagan continued his public rejection of a military move against Iran, saying that Israel didn’t “have the capability to stop the Iranian nuclear program, only to delay it.”

“If anyone seriously considers [a strike] he needs to understand that he’s dragging Israel into a regional war that it would not know how to get out of. The security challenge would become unbearable,” Dagan said.

The former Mossad chief reiterated his position, saying that the “military option is the last alternative, not preferred or possible, but a last resort. Every other alternative must be weighed before the use of force.”