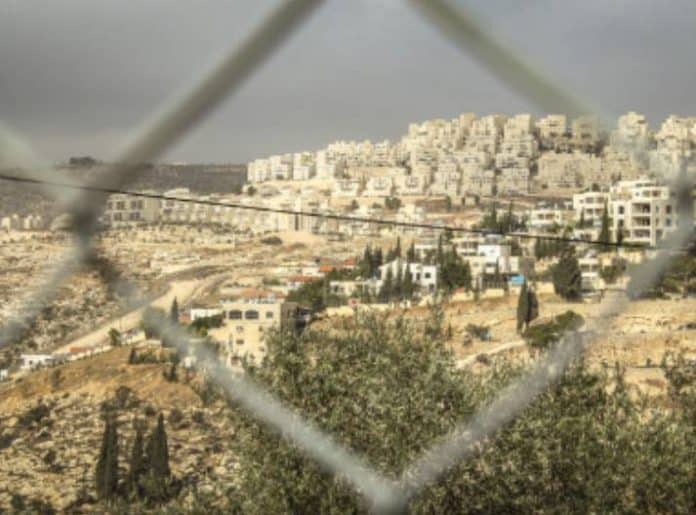 THE OCCUPIED TERRITORIES Bill is fully compliant with EU trade rules, according to new expert legal opinion given to Senator Frances Black.
The Bill, which is due to be voted on by the Seanad next Wednesday, aims to prohibit Ireland from trading in goods and services from Israeli-occupied territories by prohibiting “the import and sales of goods, services and natural resources originating in illegal settlements in occupied territories”.
Despite government opposition, the Bill has cross-party support from Labour, Sinn Féin, Fianna Fáil as well as independent senators.
Members within government such as Transport Shane Ross, Minister of State for Disabilities Finian McGrath and Junior Minister for Jobs and Skills John Halligan have all voiced their support for the Bill, causing a bit of a headache due to government stating it opposes the proposed legislation.
Voicing his concern about the Bill earlier this year, Tánaiste Simon Coveney recognised that to prohibit the import and sales of goods from the territories would “send an important signal to the Palestinian people”.
Government opposition
However, he argued that the memory of such a signal may fade over time and Ireland’s reputation would be of a country willing to go it alone, rather than a country determined to influence, persuade and bring others with Ireland.
Questions were also raised about whether Ireland could act solo by banning the trade on goods from the region, with the government said to be relying on advice from the Attorney General that finds because trade is an EU competence, individual EU member states cannot impose trade bans unilaterally.
A number of legal experts, including Senator Michael McDowell, who is also a former Attorney General, disagree with that advice.
The new advice, written by Professor Takis Tridimas, an expert in EU law at King’s College London and a practicing barrister with an extensive record before the European Courts, concludes that the Bill is fully compatible with EU law.
The professor, who is regularly cited by the Irish Supreme Court, as recently as July 2018 by Mr Justice Peter Charleton, states in his opinion that the law is very clear.
He states that while trade is an exclusive competence of the EU, EU law also provides that individual Member States can introduce restrictions on trade when they can be justified as a matter of “public policy” (under Article 36, TFEU).
Violation of international law
He adds that the restrictions on trade in the Occupied Territories Bill are justified on this basis because the settlements violate international law.
“There is […] no doubt that the prohibitions included in the Bill seek
to promote the objectives of, and give effect to, fundamental rules of international law which also bind the EU,” Professor Tridimas writes in his 19-page opinion.
He adds the “prohibitions contained in the Bill are intended to provide effective protection to the right to self-determination and by no means exceed what is necessary for this purpose…”.
Speaking to TheJournal.ie, Senator Black said the government has strongly condemned the settlements, saying they are illegal under international law, constitute an obstacle to peace, and threaten to make a two-state solution impossible. This is also the longstanding position of the EU and the UN.
However, in opposing the Bill, the Tánaiste has relied on the unpublished advice from the Attorney General.
Black called on Coveney to publish the advice from AG, so that all parties could see the reasoning behind the government’s stance.
Professor Tridimas’ opinion shows that Ireland has the legal capacity to pursue this, she said, adding this can only be done “if the political will is there”.
“I would love to see it [the AG’s advice to government]‘, Black told TheJournal.ie.
Two-State solution
Like the government, she said she too supports a two-State solution between Israel and Palestine, but she said peaceful negotiations are needed for that to become a reality.
“The settlements are illegal and that is just wrong. It is nearly an apartheid regime at this stage in Palestine,” she said, stating that people are being prevented from walking down their own road, with new settlements being built daily.
This week Airbnb said it would withdraw listings for rentals in Jewish settlements in the occupied West Bank, ahead of the release of a Human Rights Watch report criticising the inclusion of settlements.
Israel strongly denounced Airbnb’s decision and threatened legal action against the company, while Palestinian officials welcomed it.
Senator Black said Airbnb is not a charity but a very big company which has chosen to take such action. “Even they are recognising the issue with the settlements,” she said, and questioned why the Irish government would not take its own action and support her Bill.
Speaking last weekend, Coveney said Ireland could be forced in to recognising the State of Palestine if there is no further progress on the Middle East peace talks.
“If we see no prospect of a movement in the direction of a real peace negotiation in an effort to ensure that we recognise that the only solution can be based on two-state solution we may have to reassess government’s approach in relation to recognition,” he said.
Dublin is to host a Middle East summit in the new year, dealing specifically with the ongoing Israeli-Palestinian conflict.