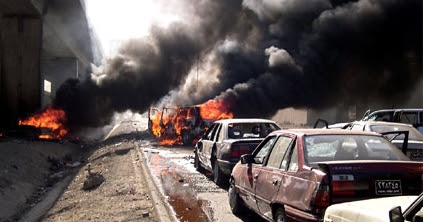 A wave of suicide bombings carried out by foreign volunteers entering Iraq from Syria is killing some 1,000 civilians a month, bringing the country back to the brink of civil war. Many of the bombers are likely to have entered Syria across the 500-mile border with Turkey in the expectation that they would be giving their lives to overthrow Syrian President Bashar al-Assad and his government.
The foreign jihadists are brought to Iraq by the Islamic State of Iraq and the Levant (Isis), which in recent weeks has started to publicise on its Twitter feed the national origins of the bombers. According to a study by Bill Roggio, of the Long War Journal website, of 26 Isis bombers in one much-fought over Iraqi province, Diyala, north-east of Baghdad, no less than 24 were foreigners whose noms de guerre indicate that the majority came from North Africa, with 10 from Tunisia, five from Saudi Arabia, two each from Libya and Egypt, and one each from Denmark, Chechnya, Iran and Tajikistan.
Isis, which is seeking to establish an Islamic state in Iraq and Syria, does not recognise the border between the two countries. The bombers carried out their missions between September 2012 and today, but there has been a sharp escalation in bombings, usually aimed at killing as many Shia as possible, over the past year, with 9,571 civilians killed in 2013 and 3,630 killed so far in 2014.
The Iraqi government has for the first time become more open about which foreign states it holds responsible for supporting foreign jihadists fighting on its territory. In an interview last month with France 24 television, the Prime Minister, Nouri al-Maliki, directly accused Saudi Arabia and Qatar of being “primarily responsible for the sectarian, terrorist and security crisis in Iraq”. He said allegations that his government was marginalising the Sunni Arab community were made by “sectarians with ties to foreign agendas, with Saudi and Qatari incitement”.
Isis should have little problem transporting suicide bombers from Syria because it controls much of the north-east of the country, but their transit through Turkey in large numbers would require at least the passive consent of the Turkish forces. The Syrian government now controls almost all of its border with Lebanon, while Iraq’s other neighbours – Jordan, Saudi Arabia, Kuwait and Iran – tightly control their frontiers.
The Danish suicide bomber was identified by Isis as Abu Khattab al Dinmarki but, as with the other foreign jihadists, his real name was not revealed and his face was blurred in a picture. Isis is eager to publicise its pan-Islamic support, and two other of its units have also given details of their foreign volunteer bombers.
Isis has increased spectacularly in strength in Iraq over the past year. In March it staged a parade of vehicles, some of them military Humvees taken from security forces, in Fallujah.
The Iraqi government has recently evacuated the notorious Abu Ghraib prison, just west of the capital, which Isis stormed last summer, freeing hundreds of its militants. Iraqi government forces have not launched a counter-attack to retake Fallujah despite Isis filming the execution of 20 of its soldiers captured there.
Some 380,000 people have fled Anbar and other provinces to escape the surge in fighting, according to the UN High Commission for Refugees.