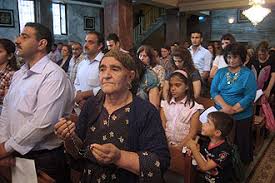 
Iraqi Muslim leaders have joined their Christian counterparts for prayers at a church in Kirkuk, in a public bid to ease tensions in the disputed northern city.

Around 1,500 people — including Arabs, Kurds and Turkmen — gathered at the Chaldean Cathedral late on Tuesday, singing Christian hymns before reciting prayers and verses from the Bible and the Koran.

”Christians and Muslims have gathered together here in Kirkuk, which has suffered from deadly violence that has scared us all in recent weeks,” said Louis Sakho, Chaldean archbishop of Kirkuk, scene of deadly unrest last month.

”It is appropriate for Christians and Muslims to pray together for peace and stability in our country and our city, which has been shocked by recent events.”

Sakho added he hoped to hold similar prayers in Sunni and Shiite mosques in future, “to have a firm and true fraternal stand for peace, stability and security in our city.”

Adnan Sayid Fattah Agha, the head of the Kurdish Kakiyah tribe, noted the event “brought us back to the original reality — Muslims, Christians, Arabs, Kurds, Turkmen together.”

”Their lives and their destiny are one, living together.”

Kirkuk lies at the centre of a swathe of territory claimed by the central government and Kurdish regional authorities.

Kurdish leaders want to incorporate the province in their northern autonomous region despite opposition from its Arab and Turkmen communities, in a row US officials have long said is one of the biggest threats to Iraq’s stability.

A spate of bomb attacks against police in Kirkuk city killed at least 29 people on May 19, in the deadliest violence to hit Iraq in nearly two months.

Currently, US forces participate in confidence-building tripartite patrols and checkpoints with central government forces and Kurdish security officers in Kirkuk and across northern Iraq.

But the withdrawal of some 45,000 US troops still in Iraq must be completed by the end of the year, according to the terms of a bilateral security pact.