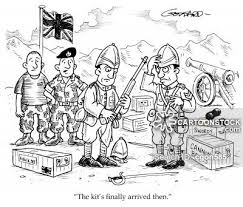 An inquiry launched to examine claims British forces routinely threw Iraqi looters into a Basra waterway, possibly drowning some, heard that senior officers were well aware of the practice known colloquially as “wetting.”

An anonymous former Irish Guards officer issued a written statement at the inquiry into Iraq-era abuses. The inquiry takes the form of a series of coroner’s inquest into different cases.

The former officer said the “wetting” practice was widely known and was used by British troops to contain an outbreak of civil disorder and looting in the wake of the 2003 war.

“We used a variety of methods to deal with looters, such as sitting them in the sun with a bottle of water, taking their shoes off, or throwing them into one of the waterways,” the officer told the inquiry.

“Because No 2 Coy [Company] had a body of water, throwing looters into the river was not something I would have been surprised to see them doing,” he added.

He said he recalled “driving past and seeing it. It was commonplace for them to do that.” He also said if his own company, like No 2 Company, had had access to the waterway from their own area, they would have done the same.

He detailed the bullying antics of the soldiers when they threw the Iraqis in the water.

“Soldiers were robust people and big, compared to Iraqis who were generally smaller. A soldier would throw a looter into the river, rather like a big brother would throw a little brother into a pool, grabbing them by the scruff of the neck and launching them off into the water, which is how I saw soldiers from No 2 Coy throwing people off the pier,” he explained.

“If it was a bridge, they would have thrown them over a railing or pushed them in. Looking back on it, I don’t think that we checked that the water was deep enough.”

It remains unclear how many Iraqis drowned after being ‘wetted,’ but the families of Ahmed Jabbar Karrem Ali and Said Shabram, who were 15 and 19 respectively when they died, launched damages claims after the two separate drowning incidents.

The officer recalled the chaos of Iraq after the invasion, saying he and his men were suddenly “in control of a city that didn’t have any water or electricity and we didn’t know what to do.”

He said he was convinced that everyone knew what was going on, including senior commanders.

“This practice was absolutely known and understood by every single person in Basra,” he said.

“Unless you were an idiot, you could not have missed it and the talk of looters and what we did with them was on everyone’s lips all of the time.”

He specifically stated that “everyone knew, even in our HQ – of that l have absolutely no doubt … every single officer knew.”

“There is absolutely no way that our commanders could not have known about this,” he said.