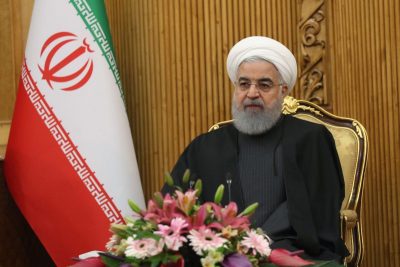 On Monday at the Trump regime’s request, Security Council members met in closed session on the mid-June Gulf of Oman and earlier hostile incidents last month.
Iran was barred from attending to stress it had nothing to do with what happened. No credible evidence suggests it. More on this below.
The US is again up to its dirty tricks in the Middle East and elsewhere — manufacturing consent for war based on Big Lies and deception.
We’ve seen it all before numerous times against one nonbelligerent country after another threatening no one.
This time Iran is in the eye of the storm because of its sovereign independence, opposition to US imperial wars, support for Palestinian rights, and other geopolitical policies conflicting with Washington’s aim to rule the world unchallenged.
And by the way, it’s the oil stupid. Iran has the world’s fourth largest proved reserves after Venezuela, Saudi Arabia, and Canada. It has the second largest known natural gas reserves after Russia.
It also has valued coal, chromium, copper, iron ore, lead, manganese, zinc and sulphur reserves. Its resources are worth hundreds of billions, maybe trillions of dollars — a prize the US covets for Big Oil and other corporate American interests to plunder.
Iranian UN envoy Majid Takht Ravanchi reacted sharply to being excluded from Monday’s closed Security Council session, saying:

“As a country whose airspace has been violated by two US spy drones, Iran was entitled to participate in the council’s meeting today. This is our right under the UN Charter,” adding:
“We expressed our readiness and request to participate in that meeting. However, unfortunately, we were denied of exercising this right.”
“Today the council is being briefed unilaterally by one party: the US, who is abusing its position as the council’s permanent member to misguide this body in order to advance its anti-Iran policy.”
“We have irrefutable information on the incident to provide to the council,” referring to downing of the US spy drone.
“According to our credible, detailed and precise technical information on the path, location, and point of intrusion, and impact of the US spy drone, there is no doubt that when targeted, the drone was flying over the Iranian territorial sea.”

Following Monday’s session, acting US UN envoy Jonathan Cohen falsely accused Iran of what he called an “unprovoked attack against a US intelligence, surveillance, and reconnaissance aircraft in international airspace (sic).”
He blamed what he called “a sophisticated state actor” for the regional May and June tanker incidents, adding:

“The only state actor with the capabilities and the motive to carry out these attacks is Iran (sic).”

Clearly the Islamic Republic had everything to lose and nothing to gain from the incidents no credible evidence suggests it had anything to do with.
The US, Israel, and their imperial partners benefitted greatly by falsely blaming Iran for what happened.
False flags are a longstanding US tradition, dating from the mid-19th century, 9/11 the mother of them all. The latest regional incidents have US fingerprints all over them, maybe Israeli ones as well.

So-called evidence the Trump regime claims it has about Iranian involvement doesn’t exist. It’s no more credible than fake news about nonexistent Iraqi WMDs, a phony pretext for Bush/Cheney’s aggression against the country.
A Monday statement by Kuwait’s UN envoy Mansour al-Otaibi, presiding over the session, said:
SC “members condemn the attack on oil tankers which represent a serious threat to maritime navigation and energy supply, contravening international rules on freedom of navigation and maritime transport, as well as a threat to international peace and security” — short of laying blame where it belongs, clearly not on Iran.
No mention was made of the US spy drone’s downing. Britain, France, and Germany issued a separate joint statement, saying increased regional tensions “risk miscalculation and conflict,” calling for “deescalation and dialogue,” affirming their JCPOA support short of fulfilling their obligations required by its provisions.
Russian UN envoy Vassily Nebenzia slammed hardline US tactics, saying “Iranian officials recently said that you cannot have a dialogue with a knife against your throat,” adding:

“What kind of dialogue (is possible) if you are introducing the worst kind of sanctions ever?”

“Imposing useless sanctions on Iran’s Supreme Leader and the commander of Iran’s diplomacy (Zarif) is the permanent closure of the path of diplomacy” with the Trump regime, adding:
He annihilat(ed) all the established international mechanisms for keeping peace and security in the world” it disdains.

Iranian President Hassan Rouhani said US sanctions against Iran show the regime’s “despair,” adding Trump’s White House is “mentally retarded.”
Khamenei, Zarif, and other Iranian officials are highly unlikely to have assets abroad to sanction.
On Monday and Tuesday, Russian Security Council Secretary Nikolai Patrushev, John Bolton, and his Israeli counterpart Meir Ben-Shabbat discussed Syria, Iran, and other geopolitical issues in Jerusalem.
According to the Wall Street Journal, Bolton and Ben-Shabbat aim to shift Russia away from supporting Iranian interests — a futile effort, adding:
They’re pushing Russia to “convince Syrian President Bashar al-Assad to curtail Iran’s presence in Syria” — what Netanyahu failed to get Putin to agree to, despite several attempts trying.
Invited by Damascus to help combat US-supported terrorists, Iranian military advisors are in Syria, not combat troops as Israel and the US falsely claim.
Putin and Trump are expected to meet on the sidelines of the Osaka, Japan G20 summit later this week.
Russia seeks Middle East peace and stability, an objective the US opposes. Talks between their officials won’t change a thing.
Permanent war is official US policy — all sovereign independent countries on its target list for regime change, including Russia, China, and Iran.
Sergey Lavrov stressed that

“(j)ust like us, Iran is legitimately present on Syrian territory to help fight terrorists, invited by the legitimate Syrian government.”

Separately according to Iranian Oil Minister Bijan Namdar Zanganeh, reports of significant declines in Iranian oil exports are greatly exaggerated, saying “(t)he news is absolutely wrong,” without further elaboration, adding:
“Giving a figure is not in our interests.” In late May, Deputy Director of Iran’s Ports and Maritime Organization (PMO) Hadi Haqshenas said crude oil loadings and exports from the country’s ports have not been halted, adding:

Russia, China, Turkey, and other countries oppose US efforts to isolate Iran and crush its economy.
The Islamic Republic withstood 40 years of US toughness. Sacrificing its sovereign rights to its imperial interests is not in its vocabulary.
*
Note to readers: please click the share buttons below. Forward this article to your email lists. Crosspost on your blog site, internet forums. etc.
Award-winning author Stephen Lendman lives in Chicago. He can be reached at lendmanstephen@sbcglobal.net. He is a Research Associate of the Centre for Research on Globalization (CRG)
His new book as editor and contributor is titled “Flashpoint in Ukraine: US Drive for Hegemony Risks WW III.”
http://www.claritypress.com/LendmanIII.html
Visit his blog site at sjlendman.blogspot.com.