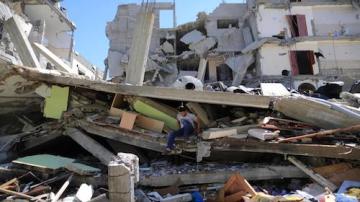 US Secretary of State John Kerry’s initiative may have ended with a whimper instead of a bang, but its impact on the Israeli-Palestinian conflict was significant and fundamental nonetheless.

The end of the political process, futile as it may have been, triggered the collapse of the status quo as we have known it for the past 47 years. It set in motion a series of events that will confront us with two stark alternatives regarding Israel and Palestine: either the permanent warehousing of an entire population or the emergence of a single democratic state.

Both the blatantly disproportionate response to the kidnapping and killing of the three Israeli teenagers and, as I write, the all-out air strikes on Gaza, have been cast by Israel as military operations: Operations Brothers’ Keeper and Operation Protective Edge. Neither had anything to do with the operations’ purported triggers, the search for the teenagers or rocket fire from Gaza.

What is clear is that the military operations had a purpose of their own, that they would have been launched regardless, that they were merely waiting on a pretext.

Palestinian cities in the occupied West Bank supposedly enjoying extra-territorial status were invaded in Operation Brothers’ Keeper, more than 2,000 homes were ransacked, some 700 people arrested. Who knows as yet the devastation wrought on Gaza – 100 dead in more than 1,100 air attacks so far, mostly civilians according to reports; deafening around-the-clock bombing of communities by American-supplied F-15 jets and artillery from the ground and sea that amounts to collective torture; Israel’s foreign minister calling for cutting off all electricity and water amid threats to completely obliterate Gaza’s infrastructure; and the prospect of almost two million people being permanently imprisoned, reduced to bare existence just this side of starvation. [Editor’s note: at the time of editing this article at 1800 UK time on 13 July, the Palestinian death toll resulting from Israeli aerial strikes had reached 167 dead and more than 1,000 wounded. No Israeli has so far been killed from retaliatory Palestinian rocket fire.]

What is clear is that the military operations had a purpose of their own, that they would have been launched regardless, that they were merely waiting on a pretext. They had to come because the vacuum left by Kerry had to be filled. “Closure” was necessary – and it was clear that the Palestinian Authority, which had several months to take an initiative that would have bolstered the Palestinians’ position, would not do so, even though Martin Indyk, the US’s chief negotiator and former American Israel Public Affairs Committee (AIPAC) leader, placed the blame squarely on Israel for the talks’ failure.

In fact, the end of the Kerry initiative marked the culmination of a decades-old campaign, systematic and deliberate, of eliminating the two-state solution.

From the start, in 1967, successive Israeli governments officially denied that there even was an occupation, claiming that since the Palestinians had never had a state of their own they had no national claim to the land. The Labour Party denied the very applicability of the Fourth Geneva Convention that protects civilian populations finding themselves under hostile rule with no means of self-defence – and which had been formulated specifically with the intent of providing the protection denied to Jews during the holocaust. It therefore embarked on a project of establishing settlements, now numbering some 200, in clear violation of international law that prohibits an occupying power from moving its civilian population into an occupied territory.

Indeed, Labour (the “Zionist left”) bears more responsibility for eliminating the two-state solution than does the Likud of Menachem Begin, Ariel Sharon and Binyamin Netanyahu. It was Labour which ruled during almost all seven years of the Oslo peace process, and it was Labour that chose to double Israel’s settler population during that period. Labour fragmented the Palestinian territories into tiny and impoverished enclaves, Labour imposed the economic closure and impediments to Palestinian movement these last 21 years, and Labour – not Likud, which actually opposed the project – initiated the construction of the Separation Barrier, the Apartheid Wall.

The Likud, of course, was a willing partner, as were all the secular and religious parties from the centre to the extreme right, but it has fallen to Netanyahu to kill the two-state solution for once and for all. The first step was to decisively end Kerry’s initiative and any that might follow it. This Netanyahu did by raising his demands to intolerable levels. He declared that the Palestinians must relinquish their own national narrative and civil rights by recognizing Israel as a Jewish state, and he held to the position that Israel would retain permanently East Jerusalem, the Jordan Valley and Israel’s main settlement blocs (about a third of the West Bank), as well as the water and natural gas resources, the country’s electro-magnetic sphere (communications) and all of its airspace.

He left the Palestinians with less than a Bantustan, non-viable and non-sovereign, a prison comprised of the 70 islands of Areas A and B of the West Bank, ghettos in “East” Jerusalem, tightly contained enclaves within Israel, and the cage which is Gaza – half the population of the land between the Mediterranean and the Jordan River confined to dozens of islands on 15 per cent of historic Palestine.

A clear, unilateral and final message

Operations Brothers’ Keeper and Protective Edge represent the imposition of a regime of warehousing, of outright imprisonment of an entire people. The seemingly blind and atavistic destruction and hatred unleashed on the Palestinians over the past few weeks is not merely yet another “round of violence” in an interminable struggle. It is the declaration of a new political reality.

Warehousing is worse than apartheid. It does not even pretend to find a political framework for “separate development”; it simply jails the oppressed and robs them of all their collective and individual rights. It is the ultimate form of oppression before actual genocide…

The message is clear, unilateral and final: This country has been Judaized: it is now the Land of Israel in the process of being incorporated into the state of Israel. You Arabs (or “Palestinians” as you call yourselves) are not a people and have no national rights, certainly toour exclusively Jewish country. You are not a “side” to a “conflict.” Once and for all we must disabuse you of the notion that we are actually negotiating with you. We never have and never will. You are nothing but inmates in prison cells, and we hereby declare through our military and political actions that you have three options before you: You can submit as inmates are required to you [Israelis], in which case we will allow you to remain in your enclave-cells. You can leave, as hundreds of thousands have done before you. Or, if you choose to resist, you will die.

Warehousing is worse than apartheid. It does not even pretend to find a political framework for “separate development”; it simply jails the oppressed and robs them of all their collective and individual rights. It is the ultimate form of oppression before actual genocide, and in that it robs a people of its identity, its land, its culture and the ability to reproduce itself, it is a form of cultural genocide that can lead to worse. This is what Israel has left the Palestinians, this is the meaning of the bombing of Gaza, the terrorizing of the West Bank – and the ongoing destruction of Bedouin and Palestinian homes within Israel.

Assuming that apartheid and warehousing are absolutely unacceptable “solutions” and, indeed, are ultimately unsustainable, generating even more violence and conflict in the volatile Middle East, Israel has in fact left us with only one workable, just and lasting way out: a single democratic state in Palestine/Israel that guarantees the individual and collective rights of all its citizens. This is what we must struggle for. Israel’s military operations mark the beginning of the collapse of the occupation.

It is incumbent on Palestinian civil society, joining with their partners on the critical Israeli left, to urgently formulate how that state would look and, ensuring everyone in that land a part in its future, to begin the struggle to achieve it.

Despite the suffering of the moment, public opinion the world over support us. Only our effective mobilization will defeat warehousing.