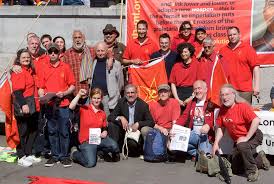 Congratulations to all the comrades from all around the country who went to London for the May Day demonstration. The sea of red flags that joined the party banners made our contingent stand out as the only British communist party with members, enthusiasm and unity.
Our contingent drew a lot of attention, with comrades doing a good job of distributing our leaflets and selling papers to the assembled crowds. Publicity spread even further when Comrade Ranjeet appeared on RT’s coverage of the demonstration [youtube.com/watch?v=YAEPVsaIsUs].
The Spectator, that ultra-conservative mouthpiece of British imperialism, reproduced a beautiful picture of our Stalin banner on their blog. Of course, they did their best to sow confusion with the headline “I’ve just seen Nazi banners in Trafalgar Square. Well, almost”, followed by a hackneyed, wholly irrelevant, and breathtakingly ignorant rant conflating communism and fascism.
The arguments put forward by the Spectator hold little water, and are increasingly being seen by British workers as the blatant lies they are. We are never afforded the air-time in this ‘democratic’ society to reach a mass audience, but you can read and spread awareness of our reply via the Red Youth blog [redyouth.org].
A good contingent of party members also attended the May Day demonstration in Manchester. Despite a relatively low turnout of around 200 people, and the same tired speeches from ‘trade-union officials’ instructing workers to vote Labour, our comrades were able to make our message clear: “Labour, Tory – same old story. Fight all capitalist cuts!”