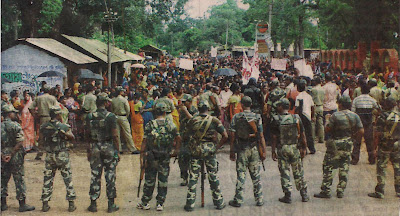 Sanhati.com
by Partho Sarathi Ray
July 22, 2010
On 20th July, around 50,000 women under the banner of “Committee to save honour of women” tried to march into Jhargram town to protest against the recent incidents of raping of women in Sonamukhi village by the joint security forces. Such a huge, and militant, mobilization of women has not been seen in Jhargram in recent times. The marchers, including school students in uniform, teachers, housewives and even many elderly women tried to enter Jhargram town via four different routes. Even the vice-chairperson of the CPI(M) controlled Jhargram panchayat samiti, Shipra Barik, joined the march. The marchers carried posters demanding the hanging of CPI(M) leader Prashanta Das, who has been known to have identified the houses of anti-CPI(M) villagers in Sonamukhi following which women from these families were raped by policemen.
The women tried to reach the Subdivisional officer’s (SDO) office to register their protest and demand the punishment of the perpetrators of the atrocities. However, the joint forces blocked all the four routes they were following. One of the processions was blocked at the Jamda deer park. However, another rally, comprising around 5000 women, coming from the direction of the Jhargram Raj college evaded the joint forces and reached the SDO’s office. The employees in the SDO’s office all fled although the marchers remained completely peaceful. Somehow the additional SP reasoned with the marchers and persuaded them to leave the SDO complex. However, the police confronted another rally of around 20000 women coming from the Lodhashuli side with force. The joint forces chased them all the way till Kalaboni. Many women were injured in the melee. Throughout the day the women marchers tried to enter the town multiple times but were confronted by joint forces personnel. Even though the marchers wanted to meet the SDO, C. Murugan, to place their demands he refused to meet them saying that he has done whatever he was supposed to do. The Sonamukhi atrocities have again taken the rage against the atrocities of the joint central and state forces occupying Jangalmahal to boiling point.