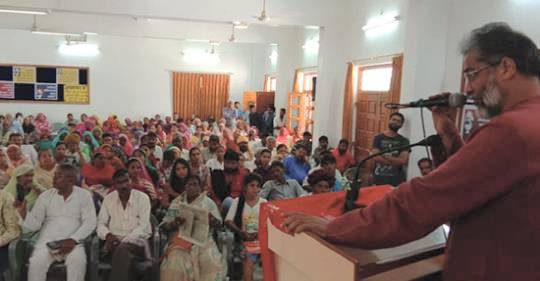 THE CPI (ML) organized a symposium on 30 September 2018 at Udaipur in Rajasthan to mark the occasion of Karl Marx’s bicentennial anniversary. The symposium was attended by hundreds of Party activists, democracy-loving people and intellectuals. CPI(ML) General Secretary Com. Dipankar Bhattacharya was the main speaker on the occasion. Addressing the symposium Com. Dipankar said that Marxism shows the way to freedom from oppression. Even 170 years after the writing of the Communist Manifesto, it is Marxism which provides the theory and analysis to understand the rampant inequality across the world due to capitalism. That is why Marx is being read again all over the world and continues to inspire the working class to fight against this socio-economic inequality. The RSS and BJP try to reject Marx by saying that he is a foreigner but the truth is that as early as the 1850s Marx had spoken about freedom for the people of India from British colonization. The truth is that the very people who are today breaking statues of Lenin who followed Marx are also breaking status of Gandhi, Periyar and Ambedkar.
Com. Dipankar said that Marx advocated change as essential for freedom from oppression and slavery. He said that we cannot wait for change to happen; we must start a decisive battle without delay to bring about change. Marx had pointed out that those who have capital have a free license to loot and oppress. Capital did not always exist, neither will it always exist. As production is social, control over it also has to be social. Oppression, loot, slavery, and murder, are all a part of building capital, and can be controlled only when there is social control over it. For this, he added that class struggle is necessary. Inequality in society can be erased only through class struggle. He expressed confidence that fascist forces will be overthrown and democracy will be saved through the unity of farmers, workers, and democratic forces.
State Committee member Com. Shankar Lal Chaudhary said that the road showed by Marx to end the oppression of capitalism is relevant even today, when 73% of the country’s resources are being controlled by 1% of the population.
State Secretary Com. Mahendra Chaudhary said that Marx had explained the crisis of capitalism very well. The capitalist class used the Modi government to shift its economic burden on to the common people through demonetization and GST. Demonetization brought the common man’s money into the banks and this money was used for granting loan waivers worth lakhs of crores to rich capitalists and letting the likes of Vijay Mallya and Nirav Modi go scot free, whereas the government remains silent on loan waivers to farmers who are facing grave distress and an unprecedented agrarian crisis.
Professor Hemendra Chandaliya said that in the Indian context, the issue of caste must be understood from the viewpoint of class; only then can we build the India of Ambedkar’s dreams. State AICCTU in-charge Com. Saurabh Naruka said that those who talked of the end of Marxist ideology 3 decades ago are now taking the help of Marx to understand the global economic crisis, and there has been a resurgence of the Left in the bastions of capitalism like America, Britain and Europe.
The symposium was attended by a good number of Left, democratic, and progressive people from Udaipur city and ML activists from Udaipur, Ajmer, Jaipur and Jhunjhunu. Among those who addressed the symposium were Rajesh Singhvi, Abid Abid, Bhanwari Bai, Pratap Singh Devda, and Subhash Shrimali. The symposium was conducted by Sudha Chaudhary and LR Patel proposed a vote of thanks.