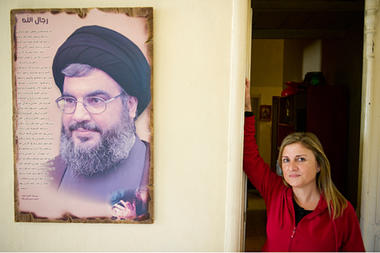 islamicinvitationturkey.com
In a home in a Shiite neighborhood in southern Beirut, images of Hezbollah leader Hassan Nasrallah share mantel and wall space with the Virgin Mary.
Randa Gholam, a Christian living the Hezbollah stronghold neighborhood of Harat Hreik, stands next to a poster of Hasan Nasrallah in her home on November 15, in Beirut, Lebanon. Gholam supports and admires Hezbollah leader, Sheikh Hassan Nasrallah, and says she feels and free to worship as a Christian in a predominately Shiite neighborhood.
The face of the revered Shiite militant leader appears on posters, a calendar, and in several photographs nestled amid those of Christian homeowner Randa Gholam’s family members. Mr. Nasrallah is, Ms. Gholam asserts amid a string of superlatives, “a gift from God.”
Lebanon’s sectarian divides are legendary, and the residents of the historically Christian neighborhood of Harat Hreik, now a Hezbollah stronghold, remember well the civil war that set Beirut on fire. They were literally caught in the middle of some of the most vicious fighting, with factions firing shots off at one another from either side of their apartment buildings.
But in the intervening years, as Hezbollah cemented its control over the suburb of Dahiyeh, which includes Harat Hreik, the militant group has been an unexpected source of stability and even protection for the few remaining Christian families. Just a few blocks away from Nasrallah’s compound is St. Joseph’s Church, a vibrant church that Maronite Christians from across Beirut flock to every Sunday.
“I feel honored to be here. They are honest. They are not extremists. It’s not like everyone describes,” Gholam says. “I can speak on behalf of all my Christian friends. They would say the same thing.”
The Christians living in Harat Hreik are a bit of an anomaly, to be sure. Christians represent a sizable population in Lebanon, though no census has been held in decades. And while Beirut’s neighborhoods are gradually becoming more integrated, they still divide largely along religious lines. The fragile peace is under deep strain as regional tensions swirl because of the conflict next door in Syria.
Not fanning the flames
In Hezbollah’s early days, its creed was “virulent,” and in the past, it may have been responsible for fanning some of those flames. But as Hezbollah gained power and joined the political system, that changed, says Paul Salem, director of the Carnegie Endowment Middle East Center.
“It doesn’t carry with it an anti-Christian strain anymore,” he says. “That’s almost entirely gone. It’s not in their rhetoric, it’s not in their creed.”
Recently, when the Shiite holiday of Ashura was approaching, the streets were choked with residents shopping and passing out sweets and blanketed with black banners commemorating the martyrdom of Hussein Ali. But Christians live openly here, and they describe Hezbollah as a tolerant group that has steadfastly supported their presence, even sending Christmas cards to Christian neighbors like Gholam.
Gholam, who throws a party every year in honor of Nasrallah’s birthday and places a photo of him in her Christmas tree, is certainly an anomaly. But other Christian families also speak approvingly of their life under Hezbollah, especially when compared to its predecessor, Amal, which they say forced many Christian residents to sell their homes. In contrast, Hezbollah extended financial support to the Christian families when Dahiyeh needed rebuilding after the civil war and the 2006 war with Israel.
Rony Khoury, a Maronite Christian who was born in Harat Hreik and still lives in the same apartment, says he feels comfortable drinking alcohol on his front porch, in full view of members of Hezbollah, and his wife feels no pressure to don a head scarf or follow other rules governing Muslim women’s attire. They have property in a predominantly Christian area of Beirut, but have no desire to move.
“After Hezbollah came, we didn’t have any worries,” Mr. Khoury says, citing safe streets. “The security is No. 1 in the world. I leave my car open, I forget something outside…. It’s very safe now, under Hezbollah.”
Only between 10 and 20 of the pre-civil war Christian families remain, out of the thousands who lived there before the fighting. While the numbers are low, Khoury insists that many would come back, if only they could afford it. But property values have climbed, and many of those who left can’t afford to move back.
Of course, there are calculations behind Hezbollah’s magnanimity. Hezbollah’s political alliance with the Lebanese Christian political party, the Free Patriotic Movement, is important to the group, and it “bends over backward to keep those relations comfortable,” Mr. Salem says.
It might also be a way to one-up Sunnis in Lebanon, with whom Shiites are constantly vying for dominance. “They pride themselves on saying they’re more tolerant, more open than Sunnis. In Lebanon, it’s a point of pride,” Salem says.
Both Khoury and Gholam, as well as neighborhood Shiites who dropped by their homes, said there are far more issues with Sunnis.
“Shiite extremists like Hezbollah, they come to our church” as a show of support, says Khoury. “But Sunni extremists, like Salafis, they kill me, they kill you.”
Things could change
Ultimately, it is Hezbollah’s foreign backers dictating the mood in Harat Hreik. If it became politically expedient for Hezbollah to abandon its acceptance of Christian neighbors, Hezbollah would be compelled to make life difficult for them.
“For Iran and Syria, their main backers, Hezbollah is mainly a strategic force against Israel. That’s the point – not creating an Islamic state or fighting a sectarian war,” Salem says. “Hezbollah is a very top-down organization. If Iran decrees something else, something else will happen.”
But that’s not something Gholam can fathom.
“I will never even think about Hezbollah giving anyone a hard time. I can’t even think about answering that question,” she says.