Home » Post Page » How US Military Plans To Kill Americans

By Adam Strange
Think it can’t happen here? It’s happening—or at least the groundwork is being laid for a future event where the United States military forces go to war against American citizens. Most frightening of all, the American ‘enemy’ is not envisioned to be anarchists, crazed terrorists, or subversives seeking to destroy the matrix of America, but everyday Americans that are attempting to save the vision of the Founders and the Constitution’s Framers—the very Constitution that the U.S. military is sworn to protect and defend. 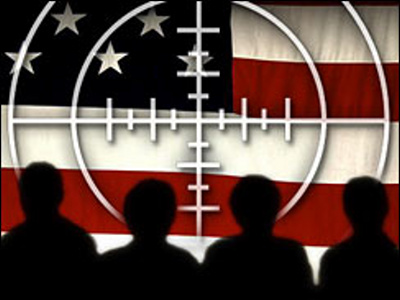 Revolution 2016
Retired army colonel Kevin Benson paints a bleak picture facing Americans in the years ahead. He and co-author Jennifer Weber of Princeton University envision a change of administrations during 2012. But the change doesn’t bring about a recovery.
Instead of an improving economy, much of the middle class continues to be mired in what’s basically a Great Depression. Jobs are scarce, unemployment remains the same or creeps up, the cost of living continues to escalate and opportunities become scarcer.

In coming years 1000s of spy drones will patrol America
A rising tide of anger and resentment spills over into the cities as roving bands of angry white Americans attack minorities and those perceived to be in the country illegally.
The violence continues to escalate: “After almost ten years of race-baiting and immigrant-bashing by right-wing demagogues, nearly one in five Americans reports being vehemently opposed to immigration, legal or illegal, and even U.S.-born nonwhites have become occasional targets for mobs of angry whites.” The insurrection
It is then the colonel lays forth his scenario of a full scale insurrection against government officials: “In May 2016 an extremist militia motivated by the goals of the ‘tea party’ movement takes over the government of Darlington, South Carolina, occupying City Hall, disbanding the city council, and placing the mayor under house arrest. Activists remove the chief of police and either disarm local police and county sheriff departments or discourage them from interfering. In truth, this is hardly necessary. Many law enforcement officials already are sympathetic to the tea party’s agenda, know many of the people involved, and have made clear they will not challenge the takeover. The militia members are organized and have a relatively well thought-out plan of action.”
As the scenario unfolds, the angry Americans who (rightly) feel that the government at all levels has become tyrannical and is no longer abiding by the compact (U.S. Constitution) it has with those that are its masters, they convene a media press conference during which the leaders of the group “invoke the Declaration of Independence and argue that the current form of the federal government is not deriving its ‘just powers from the consent of the governed’ but is actually ‘destructive to these ends.’ Therefore, they say, the people can alter or abolish the existing government and replace it with another that, in the words of the Declaration, ‘shall seem most likely to effect their safety and happiness.’” Paramilitary police with Army and Marines
The armed citizens are now perceived to threaten both the local and state governments. At that point, the governor of the state asks the federal government to step in seeking the assistance of the Department of Homeland Security.
The federal government decides to mobilize the U.S. Army with orders to quell the insurrection and put it down with any force necessary falling back on the provisions as outlined in Title 10 US Code where the president has the authority to employ both the militia and the Armed Forces to:
§ 331 – Suppress an insurrection against a State government at the request of the Legislature or, if not in session, the Governor.
§ 332 – Suppress unlawful obstruction or rebellion against the U.S.
§ 333 – Suppress insurrection or domestic violence if it (1) hinders the execution of the laws to the extent that a part or class of citizens are deprived of Constitutional rights and the State is unable or refuses to protect those rights or (2) obstructs the execution of anyFederal law or impedes the course of justice under Federal laws.
The troops are deployed with orders from the president to use all necessary force to detain,contain, and supress the Americans seeking a restoration of the legal Constitution. This will be carried out by grim military forces sworn to uphold and defend the Constitution by killing Americans attempting to uphold and defend the Constitution. Dealing with the bothersome First Amendment
The colonel emphasizes how the government and military must employ special tactics to deal with the free press, how to obfuscate information, intimidate it and bend it to the will ofWashington though subterfuge and propaganda techniques that are used with regularity in battlefield operations. The only difference, he points out, will be that this battlefield will be against Americans on American soil. War room directs attack…on Americans
“Operating under media scrutiny is not a new phenomenon for the U.S. military. What is new and newsworthy about this operation is that it is taking place in the continental United States. Commanders and staffs must think about the effect of this attention and be alert when considering how to use the media. The media will broadcast the President’s proclamation and cover military preparations for operations in Darlington. Their reports will be as available to tea party leaders in Darlington as they are to a family watching the evening news in San Francisco. Coupled with a gradual build-up of federal forces in the local area, all covered by the media, the effect of this pressure will compound over time and quite possibly cause doubt about the correctness of the events in Darlington in the minds of its’ citizens and the insurrectionists who control the town. The Joint Task Force commander, staff and subordinate units must operate as transparently as possible, while still giving due consideration to operational security. Commanders must manage these issues even as they increase pressure on the insurrectionists.”
Translation: “Managing the issues” means manipulating and intimidating the press. End of Posse Comitatus
The colonel slyly recommends how the military can be activated to kill Americans without violation of the Posse Comitatus Act that restrains the government from doing such a thing.
“By proclamation he [the president] calls on the insurrectionists to disperse peacefully within 15 days,” writes Benson. “There is no violation of the Posse Comitatus Act. The President appoints the Attorney General and the Department of Justice as the lead federal agency to deal with the crisis. The President calls the South Carolina National Guard to federal service. The Joint Staff in Washington, D.C., alerts U.S. Northern Command, the headquarters responsible for the defense of North America, to begin crisis action planning. Northern Command in turn alerts U.S. Army North/Fifth U.S. Army for operations as a Joint Task Force headquarters. Army units at Fort Bragg, N.C.; Fort Stewart, Ga.; and Marines at Camp Lejuene, N.C. go on alert.”
What happened to the Posse Comitatus Act? Army Lt. General Jack C. Stultz, the Army Reserve chief, told the Examiner recently that “In a lot of cases, there were reserve-component soldiers, sailors, airmen and Marines who were close at hand with the capabilities needed, but didn’t have the authority to act,” he said. “Finally, we got the law changed. This new legislation says that now we can use Title 10 reserves.”
The full horror of this diabolical and unAmerican plan is revealed in the report: Full Spectrum Operations in the Homeland: A “Vision” of the Future