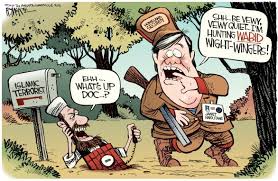 Justifying the War on Terror, George Bush huffed, “We’re fighting them there, so we don’t have to fight them here.” Broke, gullible or crazed Americans must be sent overseas to combat Al Qaeda, Bin Laden, the Taliban and ISIS. Otherwise, endless terror would devastate the homeland.

Periodically, terror plots must be orchestrated by the FBI to keep domestic fear from flagging, however. Flags at half mast stiffen limp fighting spirit.

Though Washington makes a show of denying it, the War on Terror is understood by the media-drugged as a war against Muslims, Israel’s eternal enemy.

As this open-ended assault on Muslims generated millions of Muslim refugees, Benjamin Netanyahu declared in March of 2016, “A strong Israel prevents the passage of masses of refugees to Europe. The world would be different if we were not here.”

Bibi got the second part right. Israel is the prime reason why there are so many Muslim refugees, and this world would be much more peaceful if your terror state disappeared. As long as Israel exists, there will be Muslims massacred or fleeing in terror from their wrecked homes.

Neoconservatism birthed the War on Terror. Founded by Jews, this movement’s main aim is to conserve Israel, even if they have to wreck the entire Middle East, disfigure Europe and ruin the United States. Jacob Heilbrunn explains in They Knew They Were Right: The Rise of the Neocons:

Neoconservatism was forged into an actual movement by [Irving] Kristol and Norman Podhoretz. Even today, the neoconservative movement is best described as an extended family based largely on the informal social networks patiently forged by these two patriarchs […] Not all of them were Jews—a fact that has been frequently pointed out by the neoconservatives themselves to refute the canard that neoconservatism is a Jewish movement. Fair enough. Yet the movement’s non-Jewish members were largely bound to the group by a shared commitment to the largest, most important Jewish cause: the survival of Israel.

Concocted by two rogue, undemocratic states, this War on Terror could be called off this very second, and the much ballyhooed terror threat would be instantly over. Many American lives would be saved, not just foreign Muslim ones.

Since the US and Israel need the War on Terror to terrorize, rape and degrade vast swaths of this earth, this farce must go on.

What better way to do this than to import millions of young Muslim men into Europe? Even if their homes haven’t been bombed by the US, Israel and NATO over the years, they might have other reasons to resent or despise the West.

Perfect. On top of all the individual shootings, knifings, gropings and rapes, the more spectacular terror events can be directed by the CIA and Mossad, those unmatched experts at exporting terror.

The Western public already know about mass sexual assaults in Egypt. These “circles of hell” have become increasingly common since 2005, with its most famous victim a 60 Minutes journalist, Lara Logan. Many Westerners also know about Pakistanis raping about 1,400 English girls, over 16 years, in Rotherham, England.

When I taught in Leipzig last year, two of my students, an Indian who had grown up in Qatar and a blonde, told me they were followed by Muslim men. The Indian student could speak Arabic, so she shouted at her stalkers. To shake off her stalker, the blonde went into a store and stayed there. Since these incidents happened after the Cologne mass sexual assault story, these young women were already leery of seeing Muslim men in public.

The architects of the War on Terror generate refugees, then expect Europe to absorb them. Speaking in Hanover on April 25th, 2016, Obama praised Merkel, “What’s happening with respect to her position on refugees here, in Europe, she’s on the right side of history on this […] She is giving a voice to the kinds of principles that bring people together rather than divide them.”

Hungary’s Viktor Orban has a different take, “This invasion is driven, on the one hand, by people smugglers, and on the other by those activists who support everything that weakens the nation-state. This Western mindset and this activist network is perhaps best represented by George Soros.”

Soros is proud of his geopolitical flexing. To CNN, the man said, “Well, I set up a foundation in Ukraine before Ukraine became independent of Russia. And the foundation has been functioning ever since and played an important part in events now.”

The world has become habituated to hearing about Islamic barbarity in Europe. Yesterday, an 84-year-old French priest was forced to kneel, then had his throat slit by two men shouting, “Allahu Akbar!” Three days ago, a 27-year-old Syrian wounded twelve innocent people, three seriously, when he blew himself up in Germany. Sometimes the details surrounding these crimes are bizarre or inexplicable.

The same man, Richard Gutjahr, just happened to film the beginnings of the Nice truck attack (84 people killed, 303 injured) and Munich shooting (nine killed, with four others shot). He’s married to Israeli Einat Wilf, a former member of Knesset. Why did Gutjahr aim his camera at a McDonald’s entrance before anything happened? And how did the shooter appear out of nowhere, literally, for he didn’t walk out of any door? Study the footage.

Another video of the alleged shooter has him standing on top of a parking garage. Arguing with two Turks on a balcony across the street, Ali David Sonboly accused, “Because of you, I was ganged on for seven years,” and as they called him an asshole and a jerk-off, Sonboly explained, “I was born here. In a Hartz IV [welfare] area. Here in the Turkish section of Hasenbergl. I was in treatment. How is it my fault? I haven’t done anything.”

You are to conclude that Muslims can’t even stand each other, you see, so they’ll kill just about anybody.

A key aim of the War on Terror is to spread terror everywhere, so that the state, that master of terror, can be everywhere.

Linh Dinh is the author of two books of stories, five of poems, and a novel, Love Like Hate.