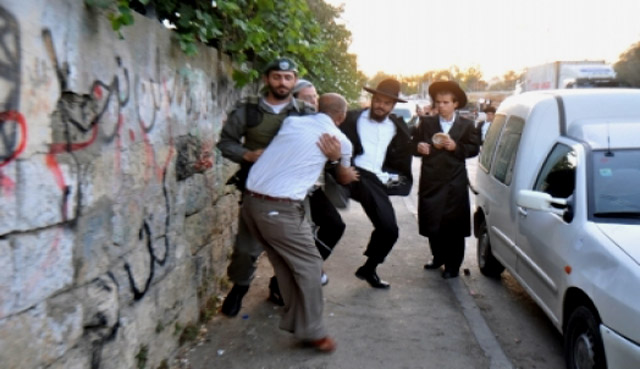 It can’t get more blatant than this.
On so-called Israeli “Independence Day” hundreds of Jewish squatters descended on the Palestinian village of Wadi Fuqeen, near Bethlehem, guarded by the Israeli occupation army. They used Palestinians farms as entertainment parks, destroying crops, contaminating irrigation pools and channels, and using, abusing and damaging Palestinian recreational facilities – including a children’s playground built by the villagers but earmarked by the Israeli occupation army for demolition.
To make matters worse, the occupation army prohibited the Palestinians farmers from tending their crops and Palestinian children from playing in their playground while the Jewish squatters were present.
Here is a report by Mirna al-Atrash of Maan satellite TV channel. It’s in Arabic – an English translation is beneath the video clip.

[Presenter] It is a recurring scene in the Palestinian village of Wadi Fuqeen, west of Bethlehem. Hundreds of settlers armed to the teeth converge on the village to enjoy its beauty and abuse its territory. But this time it was different: more than 400 settlers arrived.
[Speaker 1] During all their public holidays they come to this agricultural village. They use the irrigations pools to swim. They abuse the land, whether planted or not, leaving their refuse behind after enjoying themselves.
[Presenter] The settlers abuse everything the Palestinians own, even those things that are earmarked for demolition by the occupation authorities, such as this children’s playground, which is forbidden to Palestinians whenever there are settlers present.
[Speaker 2] This is an extraordinary situation. Here in the village we have no recreational facilities. So we built this playground to help the village’s children and create a recreational environment in the village. But it is the Jews who come over to use it.
[Speaker 3] Always, the settlers are guarded by the Israeli occupation army while they are on agricultural fields belonging to Wadi Fuqeen village. We repeatedly try to discourage them from using these farmlands but the army does nothing to stop them. The settlers come under many pretexts, including recreation, but their presence has consequences for us, including destruction of the irrigation network and damaging the children’s playground.
[Presenter] On this day every year the settlers converge on all the historical areas and beauty spots in Bethlehem to celebrate the so-called “Israeli Independence Day”, which brings back to the Palestinians memories of the catastrophe (Nakba) and dispossession in 1948. In that year 750,000 Palestinian were evicted from their homes to become refugees. This is what makes the convergence of Jews on Wadi Fuqeen a blatant violation of the rights of the Palestinians, for here the Israeli settlers enjoy themselves on Palestinians lands while the Palestinian people and Palestinian farmers are prevented from entering their own land and working on it.