Home » Post Page » Have You Killed a Palestinian Today? 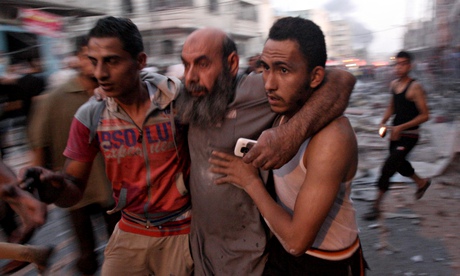 1. In the good old days when the Summer and Winter Olympics were hosted in some really odd country, Canada for some reason comes to mind, the hosts used to be able to introduce their own sport to the smorgasbord of increasingly ridiculous sporting events that are the fruit of the “Olympic Movement” as the rich like to call it. So, maybe the Canadians would have introduced curling but they were beaten to this by the French in 1924. Anyway, a host country could push to have one of its sports as a “demonstration sport” to further the sport’s popularity.

Embracing the universalist elitism of the “Olympic Movement” and keeping in step with the mores of globalism, the tuyuur here at Mantiq al-Tayr very much hope that the Olympics will soon be hosted by Israel or by its satellite country, The United States of America. If the games are hosted in the US, then we recommend that waterboarding be introduced as a demonstration sport.  In fact, recent events have provided excellent victims to be publically waterboarded by Israeli-trained CIA contractors and the winner would be the one who gets the most outrageous confession from these four morons who were set up by the FBI. (While Rosen and Weissman get off. Oh, and where the hell is Edward Mosberg? An email from Mantiq al-Tayr to the author of the article sent two days ago asking if Mosberg has come back to the US or not remains unanswered.)

However, in the interests of providing a really entertaining demonstration sport that will stimulate the loins of everyone from AIPAC to Judith Miller, we here at Mantiq al-Tayr held a minyan and bobbed our heads up and down begging Shadai to have the Olympics held in Israel’s eternal capital (no, not New York you smart asses), Jerusalem.

The Israeli national pass time is finding creative ways to murder Palestinian men, women and children. They are very good at it and probably would take the Gold, Silver and Bronze medals. Still, it’s great fun and I’m sure that the US and the UK would at least give the Izzies a run for their money that they took from us.

So, for example, let’s take the case of Israeli Border patrolmen Shachar Butbika and Dennis al-Hazub. They won a gold medal in 2002 for abducting a 17 year old Palestinian boy, beating the shit out of him, and then kicking him off the top of their patrol car as it roared down the road at 80 kph.  His head smashed into the pavement and the impact killed him. What made this one even more fun was that the boy violated Israeli law by resisting their efforts to toss him off the patrol car – kind of like a battle you have when you catch a big fish and real it in. Hahaha-Aretz reports:

He was beaten by Butbika and then forced to jump from the moving vehicle. He resisted, holding onto the jeep’s roof, but was eventually forced out. One of the officers shouted “he’s dead.” They drove away, without offering medical assistance, and tried to eliminate the evidence.

Here is a photo of him.

Butbika and al-Hazub also won the silver medal that day as well. For earlier in the day they picked up another Palestinian youth, 20 year old Alaa Sankrut.  Sankrut

was hauled onto the jeep, driven to a discreet location and kicked and beaten with a pickaxe handle, sustaining skull fractures

Unfortunately, Butbika and al-Hazub fucked up and the guy lived, much to thedismay of Rabbis throughout the land.

You anti-Semites might be pleased to know that Butbika, al-Hazub and two more of their cohorts were sentenced to several years in jail recently – having somehow been convicted of manslaughter, yes, manslaughter, not premeditated murder, manslaughter.  They’ll spend about as much time in jail as Michael Vick.

Hunting Palestinians is a game that goes on every day and each day more and more interesting ways of scoring are being invented. This past week two IDF dudes used an ice cream truck to drive around the West Bank. No doubt the truck could be counted on to bring children within point blank range and if you get a clean shot, you get a t-shirt. Unfortunately for these two clowns, they didn’t coordinate their activity with their partners in crime, the Palestinian police, so when the Good Humor Izzies opened fire, the Palestinians fired back – clearly in violation of the Torah.

Yes indeed, Palestinian Plugging can sometimes be a dangerous sport, sort of like automobile racing and sometimes the driver gets killed. Then everyone can mourn and cry and glory in self-sacrifice and in general be a complete total sanctimonious asshole.

For example, in this case, the hunter ended up getting killed by his prey. We learn all about what a wonderful hunter he was, coming to Israel from that great bastion of virulent anti-Semitism known as Canada at the tender age of eight. But 10 years later he was a professional Palestinian Plugger.  He even once tried (in vain) to save the life of a “terrorist” (“terrorist” is the Hebrew term for “Palestinian”) who had been shot by IDF hunters. He was a “big hearted” Palestinian plugger.

Cry me a river.

2. Now that the US economy has gone down the sewer and the banks, all owned by Islamofacists, have gotten about 12 trillion dollars, some of you out there in Mantiq land may be looking for jobs. Well, how about going to Israel to teach English?  Judy Steiner wants you.

“There is always a shortage of English teachers and you have to ask, where are you going to find new ones?” Dr. Judy Steiner, Chief Inspector for English Language Education in Israel told Haaretz.

Given the current financial problems in the United States, the Ministry of Education and the Jewish Agency hope to find more Anglos willing to consider an exciting future in teaching English to Israeli youth.

Just think of what a great challenge this would be. Hebrew only has two tenses, basically past and present. But English has trillions, so teaching the complex and subtle English tenses to semites can be difficult. You’ll have to teach them all sorts of conditional clauses and how to use them properly in English. Examples:

“If I had known he was a Palestinian, I would have thrown him off of the roof of the patrol car.”

How about this real quote:

“We have to make sure that no Palestinian individual remains under our occupation. If they (Palestinians) escape then it is good; but if anyone of them remains, then he should be exterminated”.

Or this real quote:

“behind the Kotel we have a mosque. But when they pray even though they are in our holiest place, they face Mecca. Their back is to Jerusalem. So you can see from only one sign that it does not belong to them. They have nothing – no connection.”

So are you up to the challenge? Your job will be to teach the Hebrew speaking children of Russian immigrants (many of them criminals) to Israel to speak English like Meir Kahane. It’s going to be tough and you need to have the right qualifications.

“Very often when there is a shortage, we put in people who are not completely qualified. But we don’t take in anybody.” Steiner said.

No, they do not just take anybody. It turns out that you have to be a Jew.

Imagine seeing an add in the Chronicle of Higher Education:

So, put on your Yarmulka and get that job. Then you can teach the kids to read the Geneva conventions.