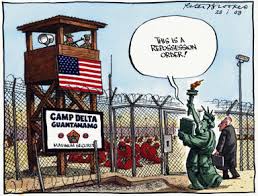 A little-known Afghan prisoner has been refused clearance to leave Guantánamo Bay, despite an apparent case of mistaken identity by the U.S. government.

Guantánamo’s Periodic Review Board (PRB) ruled this week that Haroon Gul, 33, must continue to be detained indefinitely without charge or trial because his plan for what he would do post-release was insufficient. The Board also seemed unimpressed by Mr. Gul’s insistence that the government’s allegations against him are false.

The Board’s hearing was the first time in nine years that Mr. Gul has been given the opportunity to defend himself. Yet the process was inadequate and unfair. Neither Mr Gul’s attorney nor his military representative were allowed to discuss the allegations with him under attorney-client privilege, nor was he given the chance to rebut the classified allegations against him before the Board.

Mr Gul, who has never been charged nor received a trial since arriving at Guantánamo Bay in 2007, was originally passed to the US military by local Afghan forces, according to a report by Al Jazeera. His wife and young daughter now live in a refugee camp, the report says, but little more is known to the world about him.

Mr. Gul has previously had no defense attorney during his nine years at Guantanamo, despite his desperate and persistent attempts to find one. He was represented at his Periodic Review Board hearing by Reprieve U.S. attorney Shelby Sullivan-Bennis, who met him for the first time only four days before the hearing.

His file will become eligible for review in six months time.

“We have reason to believe that Haroon is one of the many proven cases of mistaken identity, but without a lawyer, he had no capacity to challenge his detention in federal court, as others did. He was given less than three hours out of the last nine years to prepare with an attorney for this hearing that determined his fate. This is status-quo justice in Guantánamo.

“When I met this bright-eyed, chatty young man I was blown away by his attitude. He was smiling and laughing and making American cultural references that even I didn’t get.

“This denial is slap in the face to Haroon’s persistent efforts to toe the line the government has drawn for its prisoners. Haroon has learned English from scratch; he learned math and science and computers; he has played soccer with fellow detainees and been kind to the guards that lock his cage at night. To this day, he says he does not understand why he’s in there. ‘Why me?’ But day after day he makes the very best of his situation and treats those who have wronged him charitably.

“Haroon is not a bad man, Haroon is not even an irritable or ill-tempered man. He is a man who was tortured into speaking against himself and held captive by my government for nine years without an attorney.

“The allegations against our clients in Guantánamo, to this day, include information that the government admits is wrong. We are still relying on this torture-evidence to keep men hundreds of miles from their families for years on end.

“I went to law school to be a part of the American justice system, but in Guantánamo, I cannot find it.”