Most children in Gaza experience PTSD, and this has also impacted the children in Ahmed Dremly’s family, as he watches his young cousin, Little Mansour, struggle to cope with the loss of his grandfather. 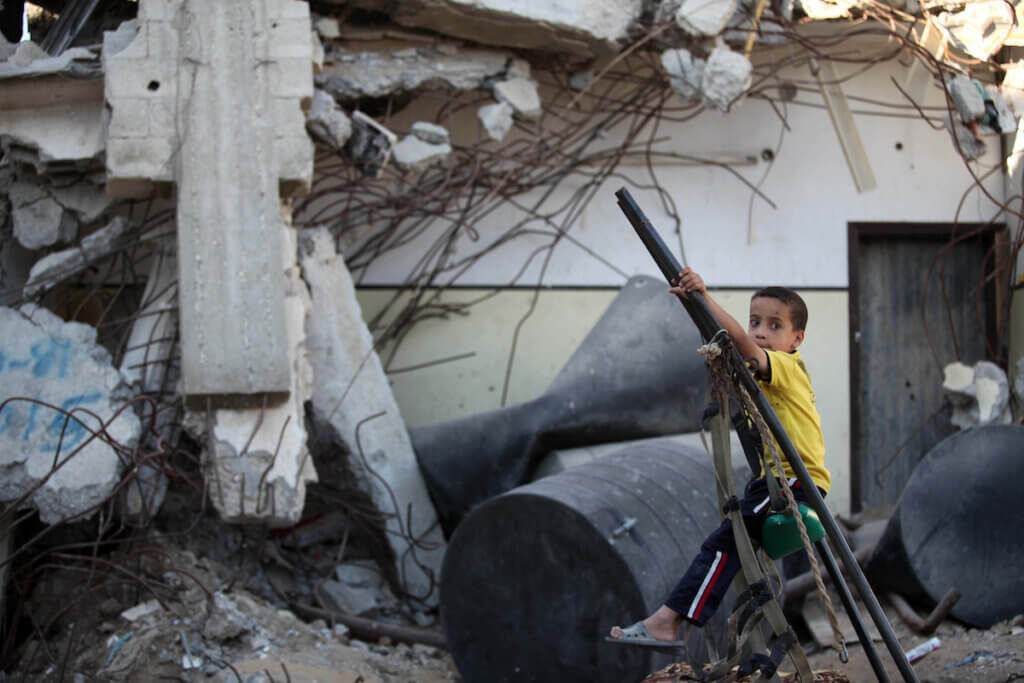 A PALESTINIAN BOY PLAYS ON THE RUINS OF HOUSES DESTROYED BY ISRAELI SHELLING IN THE EAST OF GAZA CITY ON JULY 8, 2015. THE MAJORITY OF CHILDREN LIVING IN AREAS OF GAZA HARDEST-HIT DURING LAST YEAR’S CONFLICT ARE SHOWING SIGNS OF SEVERE EMOTIONAL DISTRESS AND TRAUMA, INCLUDING FREQUENT BED WETTING AND NIGHTMARES, ACCORDING TO UNICEF. (PHOTO: ASHRAF AMRA/APA IMAGES)

It is nearly 2 a.m. in Gaza. It’s a quiet night. No drones. No bombs. Then shrieks. And yet more shrieks.

This has been the case with my cousin, five-year-old Mansour, who regularly wakes sweaty after wetting the bed. Mansour has a recurring nightmare of his grandfather, also Mansour, 69, who was killed in an Israeli airstrike last May.

I remember my uncle shouting at my cousins and me asking if anyone had annoyed little Mansour. My uncle had 14 grandchildren, but I bet that little Mansour was his favorite child, maybe because he had his name.

The day before Eid Al-Adha, my uncle Mansour grabbed his cane and walked to nearby stores to buy some tomato and salty fish, called feseekh, in preparation for spending the Muslim holiday with his family.

During his short walk, two Israeli missiles struck a car next to him in the street. My uncle didn’t expect to be targeted. As always, Israel claims that it defends itself, and it accurately identifies its target bank.

My uncle and four other civilians, all of whom were my neighbors, were killed in the blasts. We weren’t just shocked and saddened by this massacre, but we also felt as if we lost parts of ourselves. Old Mansour, the mukhtar, or head of my family, is no more here.

Everyone in my family noticed the changes in the family childrens’ behaviors after the killing of my uncle Mansour. They show symptoms of post-traumatic stress disorder, increasing signs of distress like bed-wetting, nightmares, and panic from loud sounds, little Mansour included.

Sociologist Mark Ayyash, who has studied violence, social and political theory, wrote at the time of the escalation between Israel and Gaza, “From the very first years of childhood, Palestinians in Gaza receive a clear message from Israel and indeed from the world: you are not human, and we do not care.”

“Some children in this world get to gaze at the stars, kickstarting their sense of wonderment and discovery,” Ayyash said. “The children in Gaza are forced instead to gaze at stones, at the rubble. “

As I have a degree in English, I used to gather neighborhood children on Fridays and read English stories to them. I enjoy teaching and entertaining them. My uncle’s house is next to ours. So, little Mansour was always the first on the scene, but after his grandfather was killed, he just came twice. The five-year-old boy who was full of innocence and life has become an introvert.

Little Mansour’s mother, Dova, told me recently that her son asked: “to come down to the grave of his grandfather to give him a kiss, when his father and I took him and his sister Sham, 4, to the cemetery.”

“I couldn’t answer, but I cried when Sham asked me, ‘Is my grandfather going to wake up and go home with us, mama?’” she added.

Each of Gaza’s children has many questions that must be answered. Like Talia, 3, my niece, questions, “Why does Israel want to kill me with an airstrike? Does Israel kill other children across the world the same way it kills us?’

My uncle Mansour was one of the many victims who was killed in cold blood. War is never over. In Gaza, there is no post-trauma, we’re all still mid-trauma, and the little ones pay the largest price.

Children under 15 make up about half of the two million people living in Gaza. During the 11-day escalation in May, 256 were Palestinians were killed including 66 children, and another 540 children were injured, according to the Palestinian Ministry of Health.

Since September 2000 to 1,727 Palestinian minors in the Gaza Strip have been killed by Israeli forces, according to the Israeli human rights group B’Tselem.