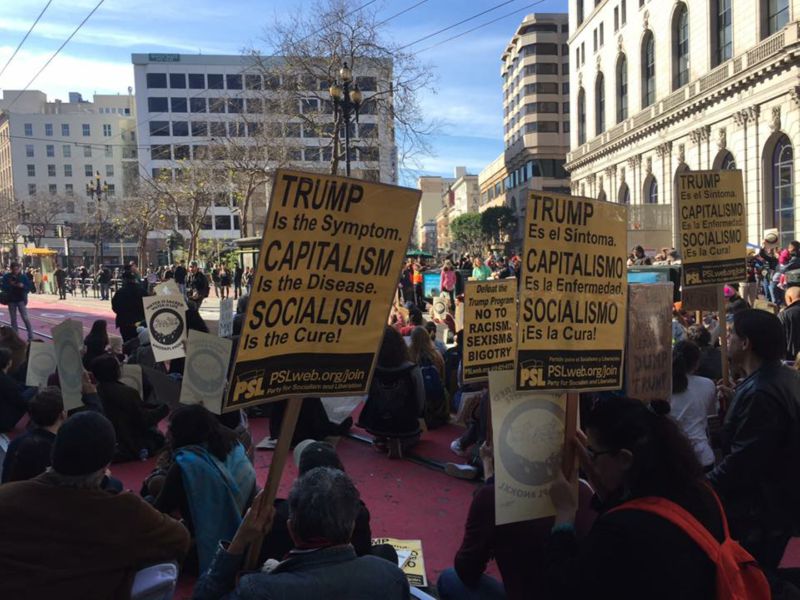 In just one week, with several strokes of a pen, Trump unleashed upon the working class in the U.S. an attack not seen in decades. From his attack on the flawed Affordable Care Act to the banning of immigrants from Muslim countries to the explicit targeting of “sanctuary cities,” the actions demonstrated that the bigoted, racist and sexist rhetoric heard on the campaign trail was in fact the foundation of the Trump program.

The reaction to these attacks has been a mixture of fear and rage. Statements made by politicians and community leaders are beginning to draw the line at local, state and national levels between Trump and his supporters and #TheResistance.

In San Francisco, the notoriously anti-homeless, anti-worker and pro-1% mayor, Ed Lee, stated to the national press that the “City by the Bay” would continue to welcome and defend its status as a sanctuary city because “the purpose is to keep everybody safe.” To those of us fighting to prosecute the murderous, racist cops who killed Luis Gongora—an immigrant from Yucatan, Mexico, who was homeless at the time he was murdered by SFPD—it is a joke to think that this city is a safe haven for immigrants. To those of us who exposed the lies of the cops who shot Amilcar Pérez Lopez, a young, hard-working gualtemateco, the words of Ed Lee are hypocritical at best. No killer cop has been prosecuted, and District Attorney George Gascón, who has overseen these cases and is a close ally of Ed Lee, remains in office.

As a teacher in the heart of the Mission District, the historic Latino community that continues to be eviscerated by Ed Lee’s real-estate/developer friends, the term “sanctuary city” is a blemished label hiding the super-exploitative and racist relationship between immigrant labor and capitalism in one of the most expensive cities in the world. Ed Lee, the Democratic Party and many liberals state that they “love” immigrants and that immigrants are what “makes Ameri[k]a great.” But why? Because they “love” that immigrants wait on their tables and wash the dishes at their restaurants? Because they “love” how immigrants clean their hotel rooms for a measly wage? Or do they “love” having a cheap babysitter who does all the chores for their families?

Immigrant families regularly have to move from SRO (Single Resident Occupancy) to SRO. Their children are exposed to the harsh life of people with drug abuse issues and emotional and mental needs. If immigrant families are lucky, they live in very tight living conditions. An entire family can live in just one room of a two- or three-bedroom home with others occupying a bedroom and sometimes the living room. Ed Lee and his cronies have fought tooth and nail to preserve the low tax rates for major tech companies like Twitter while neglecting social services for those in need.

Ed Lee and San Francisco liberals in general envision a sanctuary city with forced confinement where immigrant labor has to submit itself to poverty, racism, poor housing conditions and police brutality. The resistance movement, grounded in a program that centers around the needs of poor and working-class people in San Francisco and prioritizes immigrants and the most oppressed, can win us much more than simple “sanctuary city” status.

From sanctuary city to liberated city

The great Dr. Martin Luther King Jr. once said at a rally in solidarity with strikers in Memphis, Tenn., “What does it profit a man to be able to eat at an integrated lunch counter if he doesn’t have enough money to buy a hamburger?”

He understood that civil rights without economic rights cannot lead to the real self-determination of a people. In San Francisco and around the country’s major metropolitan cities, revolutionaries must fight for both. We must build broad coalitions where our political unity revolves around an anti-Trump program that sharpens the line even further between the status quo offered by the Democrats and the revolutionary politics of the people’s movements. We cannot let the anti-worker, gentrifying and pro-privatization Democrats who run our major cities and claim to love “diversity” be the leadership of this resistance.

The PSL has built strong relationships with allies and compañerxs in San Francisco based on our unwavering support for the people’s demands. We do not build our strength based on relationships with politicians or opportunist non-profits or institutions that offer more access if we only “play nice.” Now, more than ever, we must continue to strengthen that relationship so that the Ed Lee’s of the world don’t misguide our resistance. In the short term, we will advocate for raising the minimum wage to $20 an hour so that all workers in San Francisco have a right to live where they work. One-hundred-percent public and affordable housing should be the number-one priority for any new housing construction permits given by the SF Planning Department. All rents should be rolled back to pre-2000 levels. An anti-Trump tax proposition should be created and supported so that new taxes are placed on the wealthy downtown businesses and real estate moguls that run this town. The police department should immediately have its budget cut due to poor performance and lack of adherence to federal recommendations for improvement. All that money should go to quality schools and the retention of educators. And if and when the ICE raids begin, we will all place our bodies on the line to prevent any family from being separated by the state.

For the long term, we will continue to agitate on the streets to do away with capitalism, a system where we produce all the wealth and reap none of the benefits. We will not be afraid to state that socialism, a system where housing, health care, education and a job are guaranteed rights, is what can bring about a liberated city. And we will continue strengthening the resistance to fight for a socialist revolution the way so many other countries have done in the past, by recruiting and training new fighters whose consciousness is rooted in the history of our peoples’ struggles. If you are tired of having to fight the game of both Republican and Democrats, join us and together we can win!