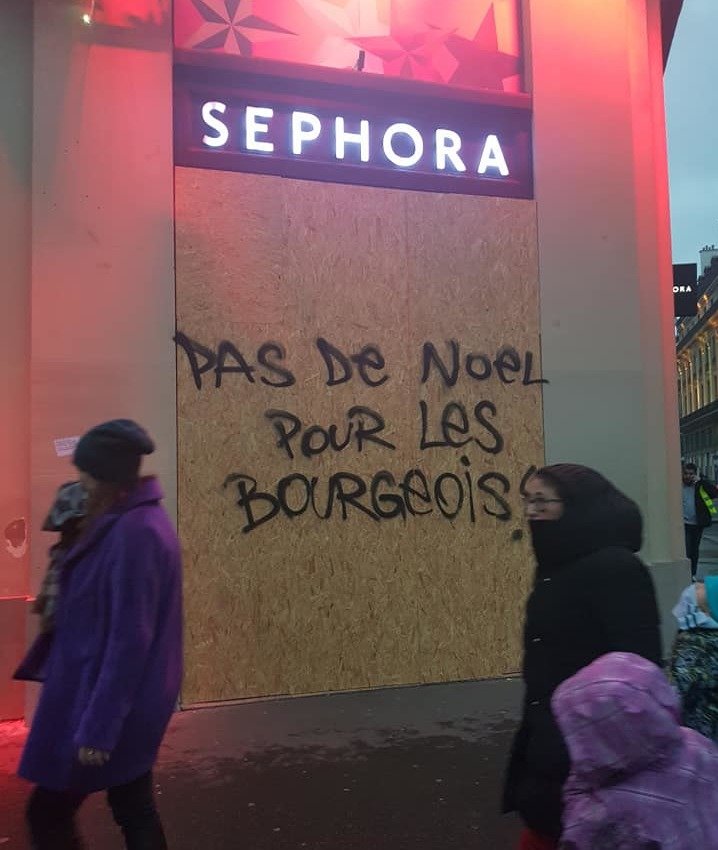 Graffiti on a boarded-up store during a Yellow Vests protest reads “No Christmas for the Bourgeoisie” Photo: Marcel Cartier.

The French ruling class is being shaken to the core and the huge people’s struggle has just begun.
It began with the now familiar Yellow Vests movement, a militant street rebellion against intolerable economic conditions of poverty as the super-rich flaunt their wealth stolen from the workers.
With each day, the movement is rapidly deepening, sweeping across France, with mass popular sectors, high-school, university, working and unemployed youth, postal, port, firefighters, transportation and other unionists, and more, joining in.
After weeks of remaining silent while he oversaw the deployment of 89,000 police in a brutal assault in the hopes of crushing the protests, today French president Emmanuel Macron pleaded on national television to the public.
Stating, “Maybe I gave the impression I didn’t care but that is not true. Maybe I hurt some of you. That was not my intention,” Macron declared a state of economic and social emergency, and promised immediate changes.
Among the few concrete measure he announced is an end-of-year untaxed bonus for all workers, while promising to work toward guaranteed work for students after graduation. The French president also committed to raising the minimum wage. Macron said that Prime Minister Édouard Philippe will announce further changes tomorrow in Parliament.
But he made clear that repression will be the order of the day to stop the protests.
He began by accusing the protesters of violence and warned that the state will intervene to stop them. “When there is violence, freedom stops. The calm and republican order is what needs to be restored. We will do everything to restore it … I have given the most rigorous instructions.”
Yet, what could become the biggest mobilization to date, “Act V,” is set for this coming weekend.
Despite his crocodile tears, Macron and the class he serves did not wake up yesterday to the suffering of the poor. No, he understood with alarm that the all-out deployment of riot police, tear gas and tanks did not succeed one iota. In fact, the movement became more defiant and determined.
Macron now knows he could potentially be ousted. And even more, the monolith of capital also faces a serious challenge. After the government’s proposed gas tax was cancelled, the slogan rose in the streets, “It is too late. You should have talked before.”
The political establishment and capitalist class are facing a severe crisis that they cannot resolve by simple measures and promises. Macron promised concessions he would never have declared but for the power of the rebellion.
A people’s revolt
As the Yellow Vest movement has grown, the demands of the protestors have broadened far past their initial grievances. The spark that lit the fires of discontent was a tax hike on gasoline, which would have fallen hardest on the poor and working class.
Workers can see clear as day that this fuel tax is a pathetically inadequate attempt to address the existential crisis facing human civilization as a consequence of climate change. As a consumption tax, it imposes a heavier burden on those with lesser income, while the capitalists continue their production for profit that is the root of environmental ruin. Far from being opposed to environmental protections, the Yellow Vests joined climate marchers in large numbers at a major ecological demonstration last Saturday.
The demand of the movement is not simply an end to this tax hike (which has already been accomplished) but a complete reordering of production towards green technology and social programs to guarantee justice and dignity for the masses of people.
A list of demands by the Yellow Vest movement being widely circulated demands deep economic reforms in favor of the working class and an end to policies that favor the rich at the expense of society. These include:

As with any mass, spontaneous movement, there are contradictions within it as seen with the demands related to immigration which call for an end to the causes of forced migration and for asylum seekers to be treated well, while also supporting the return of unsuccessful asylum seekers to their home of origin.
While the Yellow Vest protests began spontaneously, the movement is developing increasingly sophisticated forms of organization, including the recent emergence of decision-making general assemblies and the issuance of these programmatic demands. As is the case with any spontaneous uprising, competing ideological trends of many stripes are vying for influence. The history of the socialist movement shows that the solidarity and active involvement of revolutionaries is essential.
Macron is not the first French president to try to implement a pro-rich austerity program, but the resistance to these moves have historically been led by the organized labor movement and left-wing political parties. When the demonstrations began, some groups expressed concern over the presence of the far-right in the Yellow Vest actions. However, these concerns are fading as the progressive and working class-oriented nature of the movement becomes clearer. The historically communist-led CGT union federation is calling for a day of action later this week to pressure the government to raise the minimum wage, which is a key demand of the Yellow Vests.
Macron’s national address clearly indicated that the neo-liberal, pro-capitalist reforms he has heavily promoted are not on the chopping block. Using the “whip-saw” argument that taxing the corporations would harm the working class, he simply appealed for fairness from the corporations, “… I am also asking our big companies to consider the citizens in their bylaws, in their operations. Some of you want me to come back and revisit the fortune tax [levied on the rich]. However, this has caused the richer companies to depart and leave our country and we have suffered from this measure tremendously. Going backward will make us weaker and we will lose jobs everywhere.”
This is the crux of the matter. Macron and his class believe for now that pleading for a second chance, making empty promises for minimal economic relief, and evoking “Vive la France,” will do the trick and leave their system and power intact. But France is not one France, it is two classes, and one has grown wealthy almost beyond measure at the expense of the other.
The people’s demands will gain force as the demonstrations and movement grow. Inevitably the question of class power, of challenging the very essence of capitalism to truly resolve the crisis of France’s “99%,” comes into sharper focus.