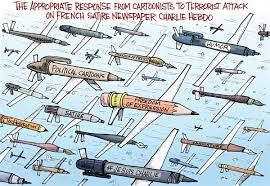 How have the great capitalist democracies demonstrated their commitment to free speech? The US military has killed journalists in the Middle East. Wikileaks founder Julian Assange is still being pursued… And are Charlie Hebdo’s crude and vulgar cartoons really about free speech?

The attack on the editorial offices of Charlie Hebdo has shocked the public, which is horrified by the violent deaths of 12 people in the center of Paris. The video images, viewed by millions, of the gunmen firing their weapons and killing an already-wounded policeman have imparted to Wednesday’s events an extraordinary actuality.

In the immediate aftermath of the shootings, the state and media are seeking to exploit the fear and the confusion of the public. Once again, the political bankruptcy and essentially reactionary character of terrorism is exposed. It serves the interests of the state, which utilizes the opportunity provided by the terrorists to whip up support for authoritarianism and militarism. In 2003, when the Bush administration invaded Iraq, French popular opposition was so overwhelming that the government led by President Jacques Chirac was compelled to oppose the war, even in the face of massive political pressure from the United States. Now, 12 years later, as President François Hollande is striving to transform France into the United States’ principal ally in the “war on terror,” the attack in Paris plays into his hands.

In these efforts Hollande can rely on the media, which in such circumstances directs all its energies toward the emotional manipulation and political disorientation of the public. The capitalist media, skillfully combining the suppression of information with half-truths and outright lies, devises a narrative that is calculated to appeal not only to the basest instincts of the broad public, but also to its democratic and idealistic sentiments.

Throughout Europe and the United States, the claim is being made that the attack on the magazine Charlie Hebdo was an assault on the freedom of the press and the unalienable right of journalists in a democratic society to express themselves without loss of freedom or fear for their lives. The killing of the Charlie Hebdo cartoonists and editors is being proclaimed an assault on the principles of free speech that are, supposedly, held so dear in Europe and the United States. The attack on Charlie Hebdo is, thus, presented as another outrage by Muslims who cannot tolerate Western “freedoms.” From this the conclusion must be drawn that the “war on terror”—i.e., the imperialist onslaught on the Middle East, Central Asia and North and Central Africa—is an unavoidable necessity.

Nor is anything being written or said about the July 2007 murder of two Reuters journalists working in Baghdad, staff photographer Namir Noor-Eldeen and driver Saeed Chmagh. Both men were deliberately targeted by US Apache gunships while on assignment in East Baghdad.

The American and international public was first able to view a video of the cold-blooded murder of the two journalists as well as a group of Iraqis—taken from one of the gunships—as the result of WikiLeaks’ release of classified material that it had obtained from an American soldier, Corporal Bradley Chelsea Manning.

And how has the United States and Europe acted to protect WikiLeaks’ exercise of free speech? Julian Assange, the founder and publisher of WikiLeaks, has been subjected to relentless persecution. Leading political and media figures in the United States and Canada have denounced him as a “terrorist” and demanded his arrest, with some even calling publicly for his murder. Assange is being pursued on fraudulent “rape” allegations concocted by American and Swedish intelligence services. He has been compelled to seek sanctuary in the Ecuadorian Embassy in London, which is under constant guard by British police who will seize Assange if he steps out of the embassy. As for Chelsea Manning, she is presently in prison, serving out a 35-year sentence for treason.

That is how the great capitalist “democracies” of North America and Europe have demonstrated their commitment to free speech and the safety of journalists!

The dishonest and hypocritical narrative spun out by the state and the media requires that Charlie Hebdo and its murdered cartoonists and journalists be upheld as martyrs to free speech and representatives of a revered democratic tradition of hard-hitting iconoclastic journalism.

In a column published Wednesday in the Financial Times, the liberal historian Simon Schama places Charlie Hebdo in a glorious tradition of journalistic irreverence that “is the lifeblood of freedom.” He recalls the great European satirists between the sixteenth and nineteenth centuries who subjected the great and powerful to their withering scorn. Among their illustrious targets, Schama reminds us, were the brutal Duke of Alba, who in the 1500s drowned the Dutch struggle for freedom in blood; the French “Sun King,” Louis XIV; the British Prime Minister William Pitt; and the Prince of Wales. “Satire,” writes Schama, “became the oxygen of politics, ventilating healthy howls of derision in coffee houses and taverns where caricatures circulated every day and every week.”

Schama places Charlie Hebdo in a tradition to which it does not belong. All the great satirists to whom Schama refers were representatives of a democratic Enlightenment who directed their scorn against the powerful and corrupt defenders of aristocratic privilege. In its relentlessly degrading portrayals of Muslims, Charlie Hebdo has mocked the poor and the powerless.

To speak bluntly and honestly about the sordid, cynical and degraded character of Charlie Hebdo is not to condone the killing of its personnel. But when the slogan “I am Charlie” is adopted and heavily promoted by the media as the slogan of protest demonstrations, those who have not been overwhelmed by state and media propaganda are obligated to reply: “We oppose the violent assault on the magazine, but we are not—and have nothing in common with—‘Charlie.’”

“Religious distress is … the expression of real distress and also the protest against real distress. Religion is the sigh of the oppressed creature, the heart of a heartless world, just as it is the spirit of spiritless conditions. It is the opium of the people.

“To abolish religion as the illusory happiness of the people is to demand their real happiness. The demand to give up illusions about the existing affairs is the demand to give up a state of affairs that needs illusions. The criticism of religion is therefore in embryo the criticism of the vale of tears, the halo of which is religion.” [Contribution to Critique of Hegel’s Philosophy of Law, in Marx and Engels Collected Works, Volume 3 (New York, 1975), pp. 175-76]

One has only to read these words to see the intellectual and moral chasm that separates Marxism from the unhealthy milieu of the ex-left political cynicism that has found expression in Charlie Hebdo. There has been nothing enlightening, let alone edifying, in their puerile and often obscene denigration of the Muslim religion and its traditions.

The cynically provocative anti-Muslim caricatures that have appeared on so many covers of Charlie Hebdo have pandered to and facilitated the growth of right-wing chauvinist movements in France. It is absurd to claim, by way of defense of Charlie Hebdo, that its cartoons are all “in good fun” and have no political consequences. Aside from the fact that the French government is desperate to rally support for its growing military agenda in Africa and the Middle East, France is a country where the influence of the neo-fascist National Front is growing rapidly. In this political context, Charlie Hebdo has facilitated the growth of a form of politicized anti-Muslim sentiment that bears a disturbing resemblance to the politicized anti-Semitism that emerged as a mass movement in France in the 1890s.

In its use of crude and vulgar caricatures that purvey a sinister and stereotyped image of Muslims, Charlie Hebdo recalls the cheap racist publications that played a significant role in fostering the anti-Semitic agitation that swept France during the famous Dreyfus Affair, which erupted in 1894 after a Jewish officer was accused and falsely convicted of espionage on behalf of Germany. In whipping up popular hatred of Jews, La Libre Parole [“Free Speech”], published by the infamous Edoard Adolfe Drumont, made highly effective use of cartoons that employed the familiar anti-Semitic devices. The caricatures served to inflame public opinion, inciting mobs against Dreyfus and his defenders, such as Emile Zola, the great novelist and author of J’Accuse.

The World Socialist Web Site, on the basis of long-standing political principles, opposes and unequivocally condemns the terrorist assault on Charlie Hebdo. But we refuse to join in the portrayal of Charlie Hebdo as a martyr to the cause of democracy and free speech, and we warn our readers to be wary of the reactionary agenda that motivates this hypocritical and dishonest campaign.